“A man goes to a psychiatrist. The doctor says ‘you’re crazy’. So the man says, ‘I want a second opinion’. ‘OK, you’re ugly too’.”

This is the text found on one of Richard Prince’s paintings. Prince has painted a lot of jokes, hundreds and hundreds of jokes. The question, of course, is why.

It is surely not for the reasons most often attributed to Mr. Prince by his commentators in the art world. In general, those in the art world who actually like Richard Prince tend to consider him something of a turd polisher. Prince goes out into the America beyond the boundaries of the two sides of Central Park and the two Villages and brings back fascinating and disturbing material. As Lisa Dennison, the Director of the Solomon R. Guggenheim Museum, which is currently exhibiting a major retrospective of Prince’s work, puts it: “Prince has continued to be one of contemporary art’s foremost innovators…he has merged an iconography of commercial images and pop cultural detritus with a serious sculptural and painterly tradition, elevating the banal to the sublime.” Or as Nancy Spector, curator of the show, says: “He excavates the ‘normal,’ borrowing content from advertising imagery, off-color jokes, retro car design, motorcycle clubs, pulp fiction, and even art history, to expose the inner mechanics of desire — how it is framed, sold, and perpetuated in our mass-cultural consciousness.”

In short, a turd polisher. You wouldn’t actually catch Dennison or Spector at a dive bar in upstate New York during a motorcycle rally, but Thank God for Richard Prince and his intrepid spirit, snapping pictures of the white trash for our aesthetic contemplation. We keep our hands clean; he “excavates” and then “elevates” from the “banal to the sublime.” 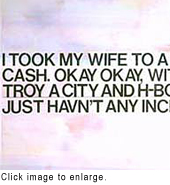 The funniest thing about Prince’s show at the Guggenheim is the degree to which the turd is actually being polished on the other side. I’ve been on the fence about Prince for some time, but I genuinely began to appreciate him when I watched the 10th or 15th seemingly serious-minded art viewer break down after looking at X number of stupid jokes and simply laugh. It wasn’t knowing laughter, it wasn’t the kind of laughter that comes from the realization that a Borscht Belt joke from 1957 is actually on a painting at the Guggenheim. That kind of second-order laughter happens with Prince but I think the sheer repetition of his joke paintings pushes past that. After a few of them, the jokes aren’t amusing in their irony anymore. They’re just what they are: bad jokes.

But sooner or later, one of them catches you as funny. That’s why Prince keeps coming with them. He’s just like a real Borscht Belt comedian. If you don’t like this one, how about this one, or this one? Indeed, a number of his paintings actually go from one joke to another, rat-a-tat-tat, in one painting. Here’s the text of “The Black Joke”: “My wife’s not too smart. The second time she got pregnant she thought we had to get married again. Another one. Abe Lincoln after a five day drunk woke up and said, ‘I freed who?” Bad jokes, but as the Borscht Belt comedian knows, eventually you can break anybody down. That’s actually one of the great things about having the show at the Guggenheim. As you stroll down the spiral they just keep coming and coming.

I don’t think Prince is interested in why any of the jokes in particular may or may not be funny. He’s not interrogating the mechanisms of humor. He’s interested in the fact that sooner or later everybody is going to hit one that gets through. I think that’s also why he started painting the jokes on a background of old bank checks. It’s like the old question William James and the Pragmatists used to ask of concepts: What’s their cash value? Which joke will deliver, which joke pays?

The fact that various curators and art critics think he must be deconstructing the jokes and the life world behind them makes it all the more ridiculous. “With my wife I got no sex life. She cut me down to once a month. But hey I’m lucky. Two guys she knows she cut out completely!” Excavating and elevating indeed.

It is more likely the exact opposite. If Dennison and Spector are right, the point of Prince’s joke paintings is essentially to provoke greater reflection on the nature of the society that would consider such a joke funny. If I’m right, the point of Prince’s joke paintings is to make people like Dennison and Spector, and everyone else, laugh at a stupid joke, thereby showing that these stupid jokes do have a power, not as something else, but exactly as the stupid jokes that they are. The point is that you don’t have to go outside of the actual world of stupid jokes, biker girlfriends, pulp, etc., in order to find things with meaning. Indeed, the meaning to be found there is perfectly well complicated just as it is. It doesn’t need to be “elevated” or otherwise polished up.

That, again, is why it is important that the jokes be stupid. If they weren’t so stupid he wouldn’t have you. It wouldn’t work with the otherwise sophisticated contemporary humor of someone like Dave Chapelle. Prince gets you with the lowest, the crummiest, the most groan-inspiring of jokes. “I met my first girl, her name was Sally. Was that a girl, was that a girl. That’s what people kept asking.”

But when you laugh at one of them (and you will eventually laugh at one of them since he tells so many) it doesn’t really matter what you claim to think about the world — you’ve joined the ranks of everyone else who laughed at one of the jokes, which may in fact be everyone there is. You can’t laugh at a joke and then claim that you don’t really think it is funny. You laughed. That’s a bigger coup than what he achieved with his Marlboro Man pictures, or his biker girlfriend, or his nurses from dime store novels. It is possible for anyone to maintain some distance, or at least to claim that they’ve maintained some distance from those images and the pleasures they represent. The jokes are the most insidious of all because you can’t pretend. You laughed.

Maybe Lisa Dennison and Nancy Spector never laughed. It’s possible. I can’t prove it one way or another. But I think they laughed. And if they laughed then what Prince has done is far more personal and unsettling than the version of culture critique that they put into his mouth. If you laughed you’re one of them, one of the rubes with bad hair living out there somewhere near Utica. I think that Richard Prince is prepared to accept that more or less we’re all one of them, which is, in fact, pretty funny.

“My father was never home, he was always drinking booze. He saw a sign saying DRINK CANADA DRY. So he went up there.” • 18 October 2007