Eighty years ago, James Truslow Adam’s Epic of America was released. As its title implies, the book was a grand but concise story of the nation, from the time of Native Americans (who Adams routinely refers to as “savages”) to the industrial transformations of the late 19th century. Epic of America has long been out of print and today remains an obscure work in American history. I recently went searching for it in a number of libraries where it was either housed in an off-site storage warehouse, misplaced, or listed as lost. At Strand, the huge used bookstore on Broadway, the 20-something clerk looked earnestly at his computer screen and told me, “We haven’t had that book in years, and doesn’t look like we will be getting any time soon.”

I did eventually find a copy of the book in NYU’s labor archives, but its absence is ironic and perhaps symbolic, for the book’s significance rests in Adams evocation, for the first time in our history, of the “American dream.” Adams writes in the epilogue:

[T]here has been also the American dream, that dream of a land in which life should be better and richer and fuller for every man, with opportunity for each according to his ability or achievement.

While that part is familiar, the next has been lost to the archives:

It is not a dream of motor cars and high wages merely, but a dream of a social order in which each man and each woman shall be able to attain to the fullest stature of which they are innately capable, and be recognized by other for what they are, regardless of the fortuitous circumstances of birth or position.

sociThis notion of the American dream as including not only individual, material wealth but also a social wealth that goes well beyond the marketplace in its support of individual equality has been lost by many since Adams wrote this. For Adams, such a democratic social order was under threat from consolidating wealth within “the super rich,” from forgetting how “to live, in the struggle to ‘make a living,’” and from investing consumerism with patriotic virtue forcing each individual “into a treadmill in which he earns, not that he may enjoy, but that he may spend, in order that the owners of the factories may grow richer.” In its review of the book, the New York Times concluded: “Here is a book vibrant with ideas that have a meaning for every reflective American,” Reading Epic of America today feels a bit like reading Orwell’s Nineteen Eighty-Four with its haunting dystopian predications about a future so familiar.

Just a few months after Epic of America was published, Peter Sekaer took his first photography class at the Art Students League in New York City. Sekaer, who fled his native Denmark just after World War I, has often been a footnote to the history of documentary photography. Since his sudden and early death at age 49 in 1950, his name and work were forgotten. But his work is receiving new attention at the International Center of Photography, where many of his images are on public display for the first time.

Sekaer studied with Bernice Abbott at the New School; eventually, through the New Deal programs, he found work as a photographer for government agencies such as the United States Housing Authority. Through such work he met and traveled with Walker Evans, photographing the familiar landscapes of weathered southern storefronts or sooty streets in the shadows of factories.

It is easy to compare Sekaer’s images with the photographs of the more famous Evans, but Sekaer’s scenes of poverty and his portraits of those on the margins during the Great Depression hold a stark descriptive quality that differ from Evans’ lyrical photographs or Dorothea Lange’s intimate framing techniques. At times, Sekaer’s images can appear quite boring, their documentary style capturing neither drama nor contemplation. But then that’s the point. If Adams’ book calls us to reflect on the dire state of the American dream amidst a failure of capitalism, Sekaer’s images, with their precise details of poverty and lack of poetic intrusions, show us what this failure looks like. 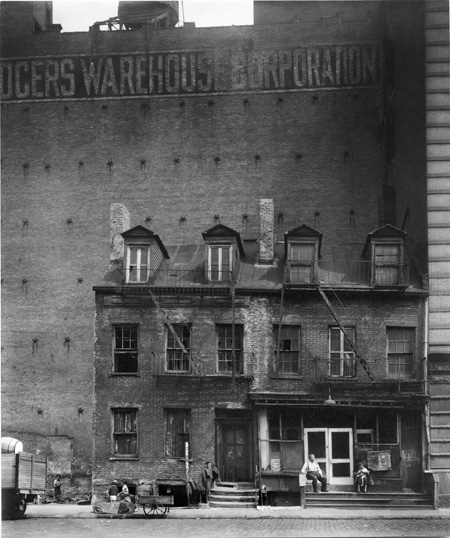 While Sekaer’s photographs, like all photographs, transform his subjects into iconic moments, the unknown and unfamous who populate his images appear quite natural and at ease in front of his camera. “Macon Georgia” is a cluttered image of a woman sitting on a wooden rocking chair holding a child, surrounded by a cacophony of poverty: wallpaper made of newsprint, cardboard boxes flattened like rugs on the rough wood floors, the rusting stove slumped in the corner. If Evans had photographed this scene, he might have excluded the woman and child, arranging instead a collage of objects that evokes a reality of its inhabitants. But Sekaer turned the room into its own paradox, in which the human dignity of the woman and child contrast with the language and images of advertisements. The word “free” on the top of one ad strikes a particularly ironic note, as does the poster for the Atlanta Life Insurance Company.

Irony threads through this show: While its subtitle — “Signs of Life” — references Sekaer’s interest in commercial and vernacular signage, it also conjures a darker reality of a body near death. A nation of dreamers on life support. In “Coal Picker, Pittsburgh” Sekaer frames the scene of a woman in a white apron and hat, hunched over as she gathers bits of coal along a brick paved street that stretches out into a distant haze. She’s the only life in the scene; you can almost hear her heavy movements in the empty space as she picks through fragments of dark coal left abandoned in the gutters. Look quickly at the image and you might not even notice the woman against the gray light of the road. You might notice instead the blackened buildings and the horizontal cut across the image by the line of a steel bridge in the distance. But Sekaer situated his camera at a distance that forces us to pay attention, to look closely, for the woman could easily get lost in the landscape, unnoticed amidst the expanse of empty streets, sooty factories, and warehouses.

In contrast, “Navajos, Tuba City, Arizona” uses a flat, white stone wall as a stark backdrop for the Native Americans  sitting along rusting barrels. There is no way to miss them. Sekaer frames this image with the sign “Tuba Trading Post” just above their heads, an ironic contrast between commerce and the inactivity of the men who stare at Sekaer’s camera: The only trade seems to rest in the glances between photographer and subject. 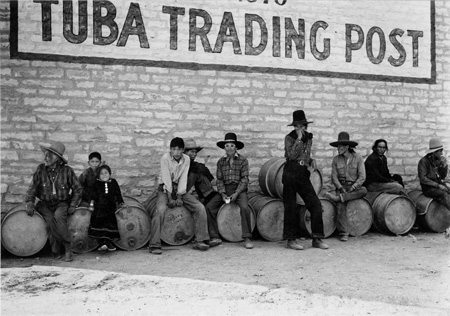 Throughout his work, Sekaer had a unique ability to capture the exchange of commercial advertisements with the nearly empty everyday realities that surround them. 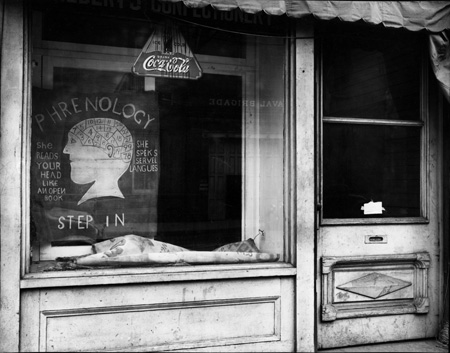 In “Anniston, Alabama, 1936,” four African-American men stand around a movie theater’s outside stairwell. The stairs are marked in large white letters with the word “colored;” a movie poster for the latest Tarzan film Call of the Savage is mounted to the brick wall and hovers over the men. So often Sekaer astutely juxtaposes poverty and social injustice with those powerful images of the dream industries of the 1930s — Technicolor Hollywood and Madison Avenue abundance — that those dreams transform into flimsy virtues. 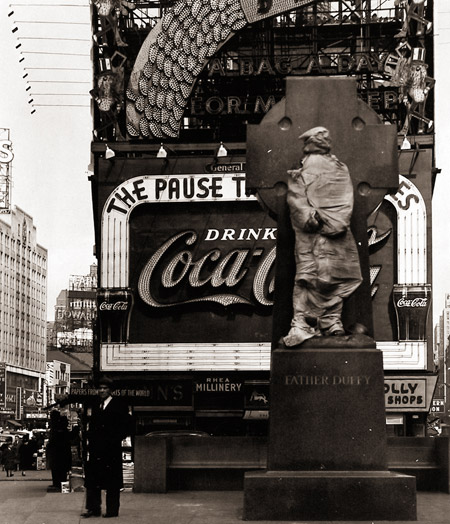 The numbers of street scenes and portraits of African-Americans in this show is striking. Unlike his white contemporaries, Sekaer’s foreign accent and casual manner granted him easier access to African-American communities than his white, American contemporaries. He took a portrait of a maid in an Atlanta Hotel, sitting with a gentle smile in her stiff uniform. In Nashville, he took several group photographs of men and women all staring with a certain calmness at the camera’s eye. He also captured street life in New Orleans, men in barbershops, a well-dressed young couple embracing on wooden steps just a moment before a kiss. In Washington, D.C. he went into the back alleys of African-American enclaves and photographed the social life of kids at play and adults at work. These images capture the ordinary energy of their subjects against the weathered poverty of the environment. They also hold an intimacy and closeness that few other white photographers were ever able to capture at the time. For these images alone, Sekaer’s revival is significant. 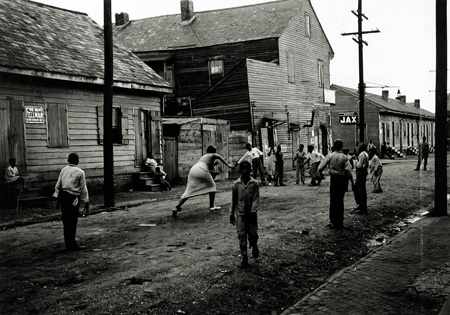 Sekaer once wrote that “photography intelligently produced can be more than an adjunct to the presentations of facts and ideas, it can be their full interpretation.” These words are written across the central gallery of the ICP show and underscore a philosophy so firmly anchored in realist documentary work. While he may have despised the notion of photographic art, there is creativity in his best works that emerges through the juxtaposition of experiences and objects, turning the everyday realities into unfamiliar moments, and the unfamiliar into the ordinary. In an essay he wrote for U.S. Camera in 1941 entitled “Nothing to Photograph Here,” Sekaer concluded with some advice on how to look:

If you like the block you live in and spend some time looking it over and thinking about the houses on it, the people, the trees, the traffic, the alley cats, the way the sun falls across the street, or the rain runs in the gutter, you need never lack subject matter. You will discover that the limitations you put on yourself by not looking beyond what you are familiar with will certainly help you get better pictures.

Looking beyond what is familiar is a useful approach for this exhibition as well. At the ICP you can better appreciate Sekaer’s work, and the significance of what he wants us to look at, by actually turning away from his photographs and wandering into a nearby gallery. “Signs of Life” competes for attention with a smaller show of celebrity photographs from the past 10 years of Harper’s Bazaar.  You have to walk through Sekaer’s black-and-white photographs, mounted on dark green walls, to arrive at the bright pink and white walls that feature Terry Richard’s portrait of a cat-like Lady Gaga; or Peter Lindbergh’s photograph of a Fay Wray inspired Kate Winslet, clinging to a New York skyscraper in a flowing white dress; and any number of casual and intimate images of Marc Jacobs. The archway separating the two exhibits is much too fragile, I thought, to transport you from the poverty of the 1930s to the celebrity dreams that fill so much of our public life today. But standing on that thin threshold, between past and present, when the present looks so similar to the past Adams warned about, I couldn’t imagine a better metaphor for the state of the American dream. • 17 October 2011