In the year 1905, Henri Matisse painted a portrait of his wife wearing a rather extraordinary hat. The painting was displayed at the Salon d’Automne in Paris that same year. Much shock and controversy followed. To many, the hat looked like a giant lump of randomly chosen colors sitting atop the poor woman’s head. What, also, was the point of all the green on the woman’s face? People and hats don’t look like that. The world doesn’t look like that.

By 1905, this game of looking at contemporary painting and expressing shock and dismay had been going on for some time. A generation had already passed since Impressionism first scandalized right-thinking art aficionados. In the years just after Impressionism, artists like Gauguin and Van Gogh fully dispatched the idea that color in painting had to correspond to color as we see it in the real world. In 1905, the public should have been ready for Matisse. But something about that portrait by Matisse was extra upsetting, even to a public that was now used to being scandalized by art. The color wasn’t just unexpected; it was jarring, verging on ugly. Critics dubbed Matisse and other painters in the show Fauvists. The word means, literally, wild beasts.

You’d expect the wild beast who painted “Woman with a Hat” (1905) to go even further into brutality and ugliness. Shocking the bourgeoisie is hard work. You’re constantly forced to up the ante.

That’s not what happened with Matisse. He continued to experiment radically with color. But his pictures became gentler as time went on. Matisse brought into his paintings a sense of balance, poise, beauty. By the end of his life, Matisse was making art that was downright pretty. There is no more damning adjective to an avant-garde artist than “pretty.”

Some of Matisse’s art is so pretty that it can be hard to take seriously. Matisse made the problem worse every time he opened his mouth. He proclaimed that art should be like a “good armchair.” The full, now infamous, quote from Matisse is the following:

What I dream of is an art of balance, of purity and serenity, devoid of troubling or depressing subject matter, an art which could be for every mental worker, for the businessman as well as the man of letters, for example, a soothing, calming influence on the mind, something like a good armchair which provides relaxation from physical fatigue.

Who was this man? A sheep in wolf’s clothing? Did he sneak in as a wild beast of the avant-garde art only, finally, to soothe us, to lull us into the bourgeois complacency that Modernist art declared its number one foe?

Consider the current show at MoMA (Henri Matisse: The Cut-Outs). It displays art Matisse created mostly with colored paper and a large pair of scissors. He’d cut shapes out of the paper and then paste them on a background, or directly on the wall. The result is something like colorful collage. There are those who would even say the cut-outs are closer to kindergarten than collage. There’s no way around it — the work can seem, at least at first glance, frivolous, childish, and deeply decorative.

So, why did the wild beast put down his paintbrush, pick up a pair of scissors, and begin making pretty wall decorations? 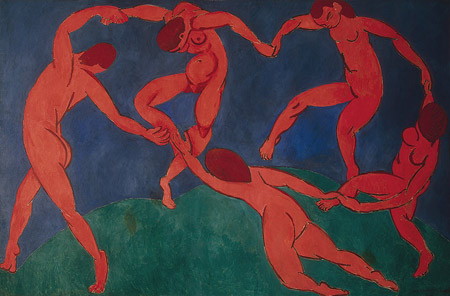 Matisse was a man depressed. The depression started in his childhood, and it never went completely away. He was frequently so depressed that he found it difficult to work at all. When asked about art, Matisse would tell people that artist’s make art not out of joy but out of pain. You could brush this aside as another version of the famous cliché: the suffering artist. But Matisse seems genuinely to have struggled with the problem of art and pain his entire life. Depression is therefore not just a biographical fact that helps illuminate some aspect of Matisse’s art. Depression is at the core of what Matisse was hoping to accomplish as an artist.

That’s because Matisse was at war. With his paintbrush, and then with his scissors, he was hoping to win a victory over thinking. Depression is, after all, a sickness of the mind. It is what happens when the mind puts a barrier between the self and the world. Matisse’s art was thus a sustained project in erasing that barrier, breaking it down. This is a hard thing to do as an artist, since a work of art is generally produced through observation and contemplation. But observation and contemplation are the very things that open up that gap between self and world through which the disease of thinking can enter.

This should not be taken to say that Matisse wasn’t an intelligent or thoughtful person. You have to be clever to go to war with thinking. You have to find ways to block thinking at every pass, undermine it, knock it off its high horse. Matisse was constantly doing just that. He was, throughout his career, obsessed with the immediate and visceral impact of color. Color – more than any other weapon at the painter’s disposal – short-circuits thinking.

Wittgenstein was getting at roughly this same idea in his Remarks on Color. He wrote:

When we are asked “What do the words ‘red’, ‘blue’, ‘black’, ‘white’ mean?” we can, of course, immediately point to things which have these colors — but our ability to explain the meanings of these words goes no further!

That’s exactly why Matisse was attracted to color. Color can’t be translated into thoughts or ideas. It just is. It just does. With color as his primary weapon, Matisse created paintings that sought not to analyze the visual world, but to declare its presence.

One of Matisse’s big artistic breakthroughs came when he painted the “Dance” and “Music” paintings of 1909 and 1910. The paintings are incredibly simple. Matisse rendered the human form with just a few dark lines and a couple of contrasting colors. “Dance” from 1910 is one of the more powerful paintings of the early 20th century. The dancers lock hands in a circle that defines the structure of the painting. The dancers are red. They dance on a green surface — the earth. The green of the earth is painted with rough strokes and gloppy paint. A big blue sky sits behind the red dancers and the green earth. There is no attempt to make the sky look like a real sky. Instead, the existence of the sky is an excuse to paint a large swath of blue.

Matisse wanted viewers to be hit with the color. He wanted the color to perform, like dance performs. We are not talking about waltzing, here. This is an ancient dance. It takes you back to something Nietzsche once said about ancient Greek dancing, that it was a form of frenzied self-forgetting, a way of merging into the play of the cosmos. The ancient dancers danced in order to make consciousness go away. They danced to break the boundary of their own individuality. “You higher men, the worst about you is that all of you have not learned to dance as one must dance,” Zarathustra proclaims in Thus Spoke Zarathustra, “dancing away over yourselves! … learn to laugh away over yourselves! Lift up your hearts, you good dancers, high, higher!”

Think of the maenads, the followers of Dionysus who danced themselves into a frenzy as they became, literally, god-intoxicated. Some of the ancient vase paintings depict the maenads dancing around in circles just like the circle Matisse portrays in his famous painting.

Matisse used color as one way to make his paintings get up and dance.

For many years after the Dance and Music paintings, Matisse experimented with form and color in different variations. He made tons of pictures, for instance, of colorful ladies lounging around in colorful rooms, the notorious Odalisques.

But by the 1930s, Matisse had returned to the problems of color in its active dimension. This is when the specific technique of cut-outs really began to emerge. Matisse would cut strips of colored paper and arrange them on canvases in order to work out problems of form and design. In the mid 1940s, Matisse realized that this technique was creating a new form of art in its own right. He designed a book called Jazz, the images of which were created solely by means of strips of colored paper pasted onto a background. Most of the images in Jazz were related to the circus. But when Matisse’s publisher suggested the title Jazz, it made sense to Matisse. It was another version of “Dance” and “Music.” The circus performers jumped and moved on the page as if animated by the same spirit that animates the rhythms of jazz music. Matisse wrote the text of the book as well, penning sentences that could have been written by Nietzsche’s Zarathustra: “He who loves, flies, runs, and rejoices; he is free and nothing holds him back.” Working on Jazz convinced Matisse that he’d discovered a new way of “painting” that would not require any paint at all. He had discovered a way to portray dancing that was more like actual dancing. The answer was in the big scissors and the long strips of colored paper. When you do a dance move, you just do it. It doesn’t slowly come into focus. That was the problem of painting for Matisse. In a sense, it took too long. Even with his bold swathes of painted color, the act of painting was not one of pure movement. It didn’t have the ceaseless flow of bodily gesture. The act of cutting paper, however, did have such flow. Cutting directly into the color by means of big fluid cutting motions with his scissors allowed Matisse to enact the very thing he was portraying. He’d finally found his true way to dance.

A little experimenting showed him that the cut-outs worked for all kinds of activity other than dancing. It worked for swimming and acrobatics, for portraying plant growth and the development of natural forms. The contrast in colors in all of Matisse’s cut-outs makes the pieces move and shake with an internal rhythm. The playfulness of the forms is palpable. This is life in motion, not life suspended in the hesitation that marks observation and contemplation. The cut-outs are Matisse’s most mature, and therefore most childish, salvo against the tyranny of the thinking mind.

There exists filmed footage of an aging Matisse making cut-outs with his big pair of scissors. It is instructive to watch the video because you see a Matisse who is fully absorbed in the process of making. His hands move instinctively and with grace. He knows what he is doing, though he does not seem to be thinking about it. Here, the cut-outs are at their most powerful. In the act of wielding his scissors the relentless barrage of thoughts could be held at bay. There, in the relative silence of his making, Matisse created colorful testimonies to another way of being. In this way of being, we don’t deliberate, we don’t hesitate in the dead spaces between self and world. We act. And then we are carried along by that action. Something beautiful emerges. Fragile emissaries from the thinking wars, Matisse’s cut-outs have nothing specific to say. They just want to be there, vibrating with the life their creator gave to them. • 17 October 2014