I know no faster way to divide a room of feminists than to utter the word “pornography.” We’re all pretty together on the choice and equal pay issues, and other disagreements have considerable common ground. But when it comes to porn, feminists retreat to their dogma. There is the camp that derides pornography as violence against women and believes it causes men to dehumanize women. This is, admittedly, a small (and mostly aging) group, but they are vocal and they like to write books. There is another group, the sex-positive group, some of whom are sex writers or have created their own pornography. They’re a little embarrassed about the “penetrative heterosexual sex is rape” stance of their predecessors and are trying to create more female-friendly sexual environment in the culture.

(I know that feminists aren’t the only ones divided on this issue, but since I cannot for the life of me understand the idea that God does not want humans to feel pleasure, the religious argument against pornography will not be discussed here.)

The issue is bigger than “bad for women” but the conversation often stops there. And it is difficult not to have a kneejerk feminist reaction to some of the images from pornography: women being raped and “liking it;” women being choked, humiliated, hurt; etc. Surely this is a work of evil, you — or I — might think. But stopping at the kneejerk reaction has never helped any discussion.

Which is why we have a need for Debbie Nathan’s Pornography. Written as part of the Groundwork series published by Groundwood Books, it gives a brief overview of the various arguments for and against porn in a remarkably clear-eyed manner. She also puts aside the religious objection rather quickly, pointing out that anyone who has a fundamental religious argument against one thing or another is probably not going to be swayed by a dose of secular logic. But there are still many myths to debunk: that pornography desensitizes men to violence against women; that early exposure to sexual imagery causes irreparable harm to children; that the industry is built on the backs of abused, drug addicted women who would never be involved in pornography if they weren’t so damaged. (Just tell that last one to the lovely pro-porn Shar Rednour, author of The Femme’s Guide to the Universe and director and star of How to Fuck in High Heels. She’ll punch you out.) 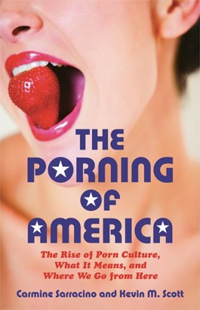 Unfortunately, however, they admit freely that they don’t really have any answers. “These negative aspects of a porned America must be addressed, but frankly, it is not clear to us in many cases how to proceed. For, without some kind of censorship (which we would oppose), how can the sheer volume of porn on the Internet — which in itself trivializes sex — be reduced?” Which makes The Porning of America a slightly strange book. Sarracino and Scott are good at dissecting certain aspects of this porned-out culture, finding what the influences are, and outlining just how prevalent some of it has become. The “What It Means” and “Where We Go from Here” parts of that subtitle, however, are cloudier.

Sarracino and Scott are, they say, pro-sex, although it’s sometimes hard to tell from the language. “We too appreciate the allure of the female form and of sex,” they write on page one. But the writing is not sexy and their pro-sex message gets lost in all of the analysis. I think their point is that sex is more interesting and varied and spiritual than what pornography portrays — and yes, it can be. But it can also be as Debbie Nathan describes: “If real-world sex were a meal, the chicken would rarely be hot enough and there would not be quite enough dessert to go around.”

Considering the repressed nature of America’s attitude towards sex since the Puritans, the current pornography boom is not surprising. Pornography serves a purpose and is popular for that reason. If Sarracino and Scott are really worried about what our pornified culture is doing to us, and they aren’t very convincing that it’s anything all that bad, they should have focused their book more on the pro-sex message — how to be sexually healthy with dignity and grace and understand fully the difference between fantasy and reality. It’s a lesson I’m sure most of the country could use. • 10 October 2008