I see only the New York that either sits in for other places or helps me summon them up. New York is the stand-in, the ersatz of all the things I can remember and cannot have, and may not even want, much less love, but continue to look for, because finding parallels can be more compelling than finding a home, because without parallels, there can’t be a home, even if in the end it is the comparing that we like, not the objects we compare. Outside of comparing, we cannot feel. One may falsify New York to make it more habitable; but by making it more habitable in that way, one also makes certain it remains a falsehood, a figment.

For Aciman, New York becomes a pleasurable palimpsest through which memories can be faintly seen, other places and other times compared, imagined, and recreated.

“Shadow cities” also describe the work of artist Lyonel Feininger, now on display at the Whitney Museum of American Art. The first retrospective of Feininger’s work in the U.S. in nearly 45 years, the show captures the arc of his creative explorations. It ranges from his early caricatures and cartoons to his experiments in German Expressionism, Cubism, and Fauvism; to the photos and woodcuts he created as a Master Teacher at the Bauhaus; to his luminous, free flowing watercolors of the city and sea made in the later years of his life in New York.

Born in New York City in 1871 to a German father and American mother, Feininger was sent to Germany at the age of 16 to study music (his father was a celebrated violinist). He practiced music throughout his life, but visual art would consume the handsome Feininger when he arrived in his father’s homeland, where he stayed for nearly 50 years.

The show’s subtitle, “At the Edge of the World,” refers to the name Feininger’s son gave the roughly hewn miniature towns the artist carved as Christmas gifts in the 1920s. The idyllic creations include sailing ships; trains; and playful, carnivalesque figures reminiscent of some of his early paintings. But the title also evokes the sense of exile, that powerful marginal space that granted Feininger (like most expats) freedom from the cultural demands of the adopted country and a broader space for creativity. As curator Barbara Haskell notes in her catalog essay, Feininger held “complex and contradictory allegiances — to American ingenuity and lack of pretension on one hand, and to German respect for tradition and learning on the other — [that] rendered him an outsider in both countries.”

In this outsider space, his canvases present an odd kind of modernism. Unlike contemporaries Paul Klee or Wassily Kandinsky, who taught at the Bauhaus with Feininger in the 1920s and whose art explored the abstraction and fragmentation of form and the mechanical force of urban modernity, Feininger’s art recalls the Romanticism of the 19th century, of expansive landscapes and village life, of the lyrical qualities of nature. Perhaps this is why his work has reemerged today, and why the critics have favored it so much — it’s a kind of modernism deeply influenced by memories of the past rather than the revolutionary exuberance of a utopic future that never materialized. Feininger’s art transforms the mechanical fragmentation of modernism into an imagined harmony of another time.

A sense of the figment, the fantasy of a world now lost, runs throughout Feininger’s work. With its cacophony of contrasting warm and cool colors and a parade of distorted costumed figures, all anchored around the elongated and stilted man in the center, “Carnival in Arcueil” (1911) presents a play of space and perspective in a style influenced by the artist’s experiments with Fauvism. Carnivals appear frequently in his early paintings, capturing village celebrations filled with color and festivity that turn the familiar into a playful fantasy. 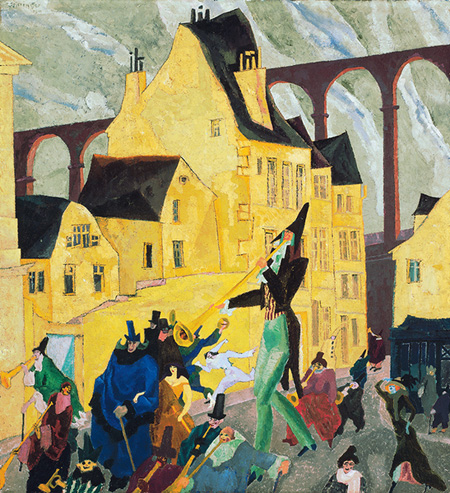 Through much of his career, the painterly gaze turned toward the small moments of experiences, the intimacies and commonplace of village life. “Newspaper Readers” (1909) and “Newspaper Readers II” (1916) — composed seven years apart — reach toward such simple moments. The evening crowds flow into one another, each figure varying in size and perspective and intently gazing on the yellow sheet. They move across a village square of hovering buildings pocked with tiny, lit windows; a small church steeple angles upward. Both paintings exude a fantasy of colors and movement, and feel like a pastiche of memories, of different moments observed and recorded and compiled against the dusk of a village square.

Before he took to painting, Feininger had a successful career as an illustrator and cartoonist. In a small gallery, the show displays some of this work, such as the products of his brief stint in the 1890s as a cartoonist for the Chicago Sunday Tribune. Even in the cartoons, themes of displacement arise. In his series “Wee Willie Winkie’s World,” nature and built environments come alive with talking trees, yawning windows, and judgmental clouds; the small Willie, alone in the world, engages with these each week in his travels through countryside and villages. Wanderings in the natural would eventually feed Feininger’s own inspiration in the decades to come.

In the years leading up to World War II, Feininger became involved with avant-garde groups as Die Brücke and later the Neue Succession, and taught and worked at the Bauhaus; exploring this time in the show, one has the sense that Feininger is an unlikely modernist. In his landscapes and seascapes of the 1930s, I kept seeing the haunting shadows of Casper David Friedrich, the German Romantic artist. Feininger’s paintings ask us to see harmony, to notice the subtleties of light, and to reflect on the unity between the natural world and us. As the exhibition text notes, “Feininger sought to infuse his compositions with what he called ‘the great forms, the great rhythms’ of nature.” He often turned to the 18th century for inspiration, finding in the fugues of J. S. Bach the essence of artistic perfection. (Feininger would compose his own fugues in the late 1920s.)

It is difficult to look at a painting such as “Sunset at Deep” (1930) — which captures the stillness of the seaside moment in geometrical shapes, the white blazing sun low and strong on the rectangle of water that holds a sliver of a sailboat — without recalling any number of Friedrich’s seascapes, with their force and contemplative effect. Feininger’s works do not value man’s progress, but rather our very humbleness before nature. Deep, a town on the Baltic Sea, was a constant retreat and a place of inspiration for the artist. Gone are the outlines of characters, carnival crowds, and cyclists. His paintings in the late 1920s and ’30s become more and more expansive in color and shape, depicting seascapes and landscapes of geometrical forms that are infused with precise shafts of white light coming from a window, a crevice, or alley. They are reflective canvases that evoke little of modernism’s mechanical objects. “My artistic faith is founded on a deep love of nature,” he once told an interviewer. So much of his philosophy is grounded on the near spiritual force of art’s ability to connect us to the natural world.

When Feininger took to photography in the 1920s, he went out into the woods near the Bauhaus complex and photographed the trees in both noon and evening light. As in his landscape paintings of the period, Feininger’s perspective was that of distance. “Everything at a distance turns into poetry,” wrote the 18th-century German poetic Novalis, “distant mountains, distant people, distant events: all become Romantic.”

And perhaps distance, with all its connotations, is the only way of thinking about Feininger’s art. His expatriation was by choice, but his repatriation was forced. When the Nazis rose to power in the early 1930s, Bauhaus and modernism were its easy targets. Feininger, whose wife was Jewish, resisted the urge to leave Germany after so many of his fellow artists had gone. As “Der Amerikaner” in the Kaiser’s Germany, he survived World War I as a dutiful enemy alien, reporting daily to the local police station; he had no reason to believe this second war would be any different. But by 1937, with fewer and fewer people interested in his paintings, and with the threats against modern artist ever stronger, Feininger and his wife left for New York, just months before the Nazis mounted their infamous “Degenerate Art” show in Munich, which included a few of Feininger’s canvases.

In New York, Feininger was little known, and his German heritage was little valued during the war years. He wouldn’t paint again for three years, living a meager existence with his wife in lower Manhattan. He entertained ideas of becoming a bus driver or an elevator operator. Interest in his art grew in the late 1940s with a retrospective of his work at the Museum of Modern Art. A New York Times profile of him noted: “Feininger is wholly accepted as American despite the 49 years spent in Europe.” Such definitions were crucial to his artistic renewal. He needed to be defined over and over again as the American artist returning home. But personally, his return brought an utter sense of dislocation. In a letter to a friend he wrote, “I was sorry to be disappointed again and again by the newness found on my search for remembered scenes from my childhood. Today, there is hardly a corner of Berlin and the surrounding region for which I do not have stronger feelings. It is strange. Yonder lies an entire cemetery of memories and here I am all alone in the city where I was born.”

Much different from the New York he left as a child, the city had taken on a verticality that Feininger captured in simple flat paintings and ink drawings. These are stark and nearly lifeless. “Manhattan Skyscrapers” (1942) looks upward at the precise outlines of buildings in ink and charcoal lines, some bleeding into shadows. Often, his Manhattan images rest on the repetition of small square windows, the only real details he gives the buildings. These echo his earlier paintings of small narrow homes and churches, such as “Architecture II” (1921), which is, in effect, a window looking out onto the windows of other buildings. Windows dominate Feininger’s art; even a self-portrait made in the 1920s is framed by arched windows that evoke the interior of a Gothic church more than the minimalism of Bauhaus. Windows lead us to other vistas, others places, other imaginings, and echo the form of a cartoon or the frame of a canvas.

And windows are memories as well, frames into a past that we can only visualize in fragments. In many ways, Feininger found solace in New York by imagining the places he left behind. He created more densely layered and imaginative seascapes that drew on his memories of the Baltic Sea and hint at the tall mast ships in the East River of his childhood. These late paintings convey a sense that all is memory, and that New York was simply that shadow city where Feininger could imagine other places and times. But then, even those German villages were a figment of the past, and slowly one begins to see that many of Feininger’s best works often evoke a longing for travel in time and place, to inhabit those villages or to walk along the brilliant light of his seascapes. “The world seems to be populated chiefly by ‘Displaced Person,’” Feininger wrote a friend in 1946, “the old-time traditions of home and family life are becoming rare.” So much of Feininger’s art was a shelter from such displacement, and a rejection of modernism’s force of fragmentation. This may explain why his art is so appealing today. His canvases are a kind of romantic modernism that evokes the power of memory in making our own worlds more unified, more habitable figments of our imagination. • 3 October 2011