Recently I’ve been experimenting with my digital camera, performing what I call “street shootings.” I set the autofocus, hold the camera casually at my waist and walk around the streets of Paris shooting away at storefronts and pedestrians. The soft click of the shutter catches some people’s attention, raising their curiosity about what’s going on. Is he taking a photo? Is he taking a photo of me?

The result nets a lot of bad photos: blurry, odd composition, horrible lighting. But once in a while will come a couple of photos that capture a fleeting moment when the perspective and the light and the pedestrians come together in a way that I could never had achieved otherwise. Often the best photos catch a person walking down a street thinking they are in their own private moment and are not the serendipitous subject of my camera. I sometimes feel a bit guilty with these walks, knowing that beneath them is a morbid intrigue about intruding on strangers who never consented to my lens.

I say morbid for from its earliest invention to our digital age there has been an uneasiness with photography and the pleasures and horrors it records. This uneasiness is precisely what confronts you at the Tate Modern’s “Exposed: Voyeurism, Surveillance & the Camera.” A warning — this large and unwieldy exhibition may unearth unsettling experiences between you and photographs.

This became particularly acute while looking at Kohei Yoshiyuki’s series “The Park.” Yoshiyuki used an infrared flash to capture the amorous night-time exploits of lovers — in all different pairings and groupings — and their voyeurs in Tokyo parks. Made in the 1970s, the images are grainy and mysterious, mixing documentary realism with a hint of paparazzi shock, but they remaining endlessly intimate and intriguing. Partly this is so because the images invite us in, and you quickly realize that because of Yoshiyuki’s quick flash techniques, you are not lost in the dark, but rather witness much more than anyone being photographed ever could. The series is mounted along a narrow and dim passage, putting you in the position of the photographer — and the voyeurs. At one point a woman behind me turned to her friend and asked, “Why would you want to look at this?” Engaged as I was in Yoshiyuki’s night shootings, I wanted to respond to the question but decided not to. Is there any question of why we would want to look?

With voyeurism in its title, and a historical sweep from the 19th century to today, the exhibition has few boundaries, and the curators felt few inclinations to really establish any. As a result the show confronts viewers with an archive of the iconic and the unfamiliar, the mundane and the arresting. Walking through the show, I often had to step back and get (to use a cliché) a perspective. In this mix of police photographs and spy images, installation art and documentary works, paparazzi and newspaper half-tones, mixes of eroticism and violence, I wondered if “Exposed” was simplifying or enlarging the history of photography. 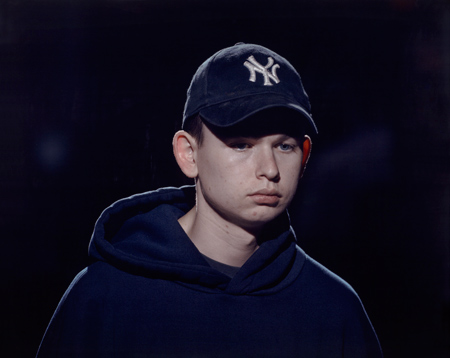 diCorcia devised special lighting that highlighted the faces of New Yorkers standing against a black background, each unaware of the camera, isolated in thought and space but still resonate with empathy despite diCorcia’s guerrilla tactics. diCorcia was not the first to do this. We also see Walker Evans’ famous subway series — in which he took photos of unsuspecting riders with a camera hidden under his coat — and Harry Callahan’s intensely focused “Women Lost in Thought” series from the 1950s, with pieces that resemble movie stills. 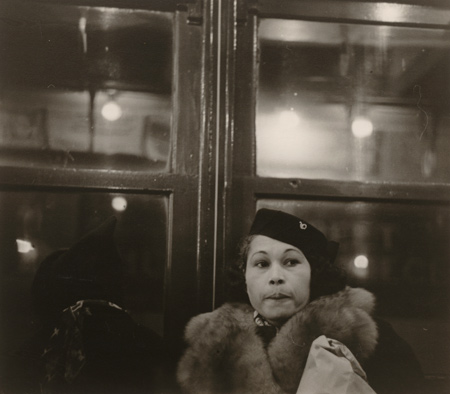 In deep contrast to such work, E.J. Bellocq’s portraits present prostitutes in New Orleans at the turn of the 20th century, some covering their faces with their hands as they spread their legs for the camera. In other such images, the faces are literally scratched off.  In Susan Meiselas’ “Carnival Strippers” from the 1970s, the camera sits behind the women performing on stage under a canvas tent, their bodies at times blurred by their movements. But then, it’s not the women’s bodies that matter here. Rather, we are meant to look at the men’s faces crowded around the stage, each offering a different contortion of excitement or stern-faced seriousness.

You can’t explore voyeurism without a consideration of the paparazzi. Weegee’s image of Marilyn Monroe on a heating grate (how many times did she have to pose that way, I wonder), sits alongside the more interesting series by Marcello Geppetti’s of Elizabeth Taylor and Richard Burton cavorting in the sun in Italy in 1962, when the two hardly knew each other. Here also is Tazio Secchiaroli’s series of actress Anita Ekberg and her visibly intoxicated husband Anthony Steel as he confronts the cameras, fist clenched and ready for a messy fight. Secchiaroli is credited with originating this art of paparazzi photography back in the 1950s in Rome, when street-smart photographers from humble backgrounds such as Secchiaroli and Geppetti used the camera as a weapon, cracking the facade of Hollywood culture and influence in post-war Italy. 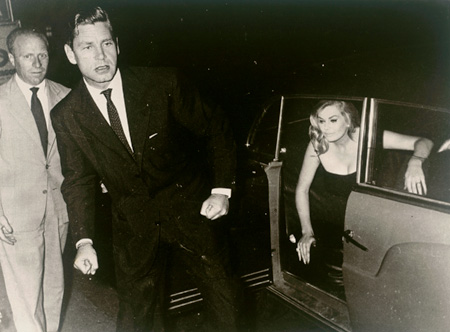 I suppose there are some easy transitions between Richard Avedon’s portrait of Andy Warhol’s scarred torso and Lee Miller’s close-up portrait of a young girl’s suicide in Nazi Germany, her body slumped over the arm of a chair. Or between Harry Benson’s photograph of Ethel Kennedy as she pleads with Benson to stop taking the photographs of Bobby Kennedy’s bleeding head, her hand raised, and the unnerving image by Georges Dudognon of Greta Garbo in Paris in the 1950s, her placid face half covered by a man’s hand blocking the camera, staring at us with one judging eye. Or perhaps between Nan Goldin’s series of compelling intimate images of friends and their lovers in “The Ballad of Sexual Dependency” and Shizuka Yokomizo’s “Stranger” series, for which she photographed people who willingly posed in their windows, but who she never actually met. 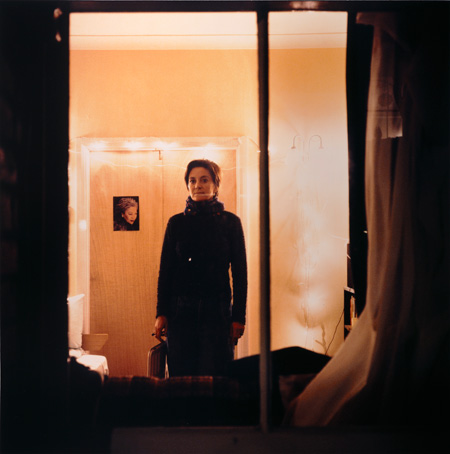 But then, what do with William Saunders’ highly posed tableau of a Chinese execution taken in the 1860s. Or Marc Garanger’s “Femme Algérienne,” a series of images taken in 1960 during the French-Algerian war and required by the French government for identity cards. The women, exposed without their veils, hold a haunting, defiant gaze against a stark white backdrop. Or Alair Gomes’ “Beach Triptych” of a young and handsome Brazilian man working out in a tight speedo. Gomes’ used a telescopic lens to photograph men from his apartment window; the results are an absorbing close-up of homoerotic voyeurism. Curiously, Gomes’ photographs are in the “Voyeurism and Desire” section in the exhibition, but in the catalog appear in the “Surveillance” section. I guess it depends on who’s looking at the triptych. It is this blurring of genres and time periods, and the mixing of photographers’ intentions that may annoy some, but will intrigue and challenge others.

As I progressed through the rooms (all 14 of them), I started to get a bit dizzy over the multiple ways of looking this show demands. Voyeurism is an exhausting task. But then this is the point of “Exposed,” for it is not ultimately about any one genre of photographs, or really about images at all. It’s about the act of looking, and the many pleasures and obsessions and oppressions the technologies of the camera have enabled and shaped over the years. “Exposed” makes clear the paradox that our voyeuristic inclinations have come back upon us in a network of surveillance cameras and digital images. Navigating through this exhibit is difficult not simply because of its size, but also in how the breadth of work here questions our own place as witnesses and spectators, photographers and voyeurs.

As I sat down on a bench in the last room, facing a video of police surveillance, I stretched my arms and noticed a small, black camera in the corner of the ceiling. There we were, all of us in that room, being watched by some museum guard in a dark basement office, focused on a grainy video of our own looking. I thought it strange that there was no acknowledgment of this reality in an exhibition so self-consciously making us aware of our status as spectators and subjects. I took out my camera and snapped a photo of the surveillance camera in some effort of resistance — or was it complicity?  After, I went down to the bookstore and bought the catalog, which has a fine selection of original essays. The store also was selling small buttons that read “Voyeur” and “Exposed.”  I bought them both as well. • 30 September 2010