One of the virtues of the current exhibit “The Age of Rembrandt: Dutch Paintings” at the Metropolitan Museum of Art is that you can see Rembrandt among his contemporaries. You can see the milieu he was working within and what was different and unique about him. One thing that is confirmed in this comparison is that, like no one else, Rembrandt is eyes. (This is a different point than that made by Simon Schama in his Rembrandt’s Eyes, but not necessarily an incompatible one). By eyes I mean the whole “eye area” — the brow, the lids, the entire fleshy region immediately surrounding and containing the eyes. Contrary to the popular saying, it is not just the eye that is the window to the soul. It is the aforementioned “eye area” that really does it. The wrinkles and furrows, the black bags, and the heavy lids — these are essential aspects of the eye. They tell of a person and who that person has been so far.

Rembrandt was a true master — of that there is no doubt and so nobody bothers to. Everyone who looks at a Rembrandt, especially the portraits, is soon struck by the humanism of it all, by the uncanny closeness you feel toward the human faces that emerge out of the characteristic Rembrandtian gloom. And no matter the person — man or woman, powerful merchant, or outright commoner — Rembrandt portrays them as suddenly vulnerable. Plain and simple, these people can be wounded, they have been wounded. That is the humanism of Rembrandt, his ability to see everyone as a potential wound, as barely prepared for the next blow, whatever it may be. And it is always in the eyes. Look at Rembrandt’s famous self portrait from 1660 and look particularly into the eyes. They are the eyes of a scared man. Scared and scarred. Rembrandt painted himself as he painted everyone else — caught in a moment of self doubt, awash in a sea of uncertainties, waiting for the other shoe to drop.

Aristotle once said that man is the rational animal. Instinctual beasts on the one hand, we also have the capacity to analyze and know something of our own condition. This, as some have noted, is not necessarily the best spot to be in. Knowledge becomes a form of pain in that we are fully, almost maliciously aware of what is to come, which is God-knows-what. The slings and arrows of outrageous misfortune. Rembrandt was exploring this, our central dilemma, as it is written on the faces of real people. We are constantly heading toward the next inevitable terror with only the certain knowledge that we don’t know enough to do anything about it. The greatest human skill is simply the ability to suffer through that which we already knew was coming. And you can see all this happening in those eyes: sad, somber, darkly mirthful, resigned but defiant, beautiful human eyes. 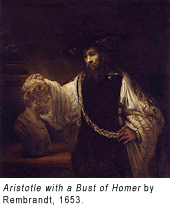 Rembrandt is thus one of those rare painters who’s always more interested in the eyes as something to look into than as something we look out with. Though a technical master, he isn’t fascinated by the visual field as such. The exhibit includes the famous painting Aristotle with a Bust of Homer. The wall text notes that during the Renaissance there was an ongoing debate between sculptors and painters as to which medium was superior. Aristotle is appealed to as an authority for the painters, since he proclaimed sight the most important of the senses. (A slight misuse of Aristotle, who was not really talking about aesthetics but about the analogy between seeing and grasping concepts. But no matter.) The painting is portrayed by the Met as possibly Rembrandt’s own ambiguous contribution to this controversy. I think, however, that Rembrandt is rejecting the terms of the whole debate. “I’m not interested in whether it is more fundamental to see or to touch or to smell,” he’s saying. “I’m interested in our eyes only in what they say about the lives we lead.” In the painting, Aristotle is looking down at the bust of Homer, the blind poet. And that is Rembrandt’s whole point. Art isn’t about sensation, it is about understanding. Rembrandt is using the authority of Aristotle to shift the debate, and in doing so to make a claim for art’s special ability to express human experience. Rembrandt identifies, as an artist, with Homer who, although blind, was no less able to capture the essence of a human life. Rembrandt shows Aristotle deferring to Homer and, thereby, directs our own sight away from the painting as a visual object and toward “seeing” as another metaphor for “knowing.” I suspect that Rembrandt is thinking especially of the Homer of Book 24 of The Iliad, the book in which Priam sneaks into the tent of Achilles and begs him pitifully to return the corpse of his beloved son Hector. Priam kisses the hand of the man who slew his son and Achilles receives him, and after having gone so far as to eat and drink together in mutual sympathy Priam says to Achilles:

Put me to bed quickly, Achilles, Prince.
Time to rest, to enjoy the sweet relief of sleep.
Not once have my eyes closed shut beneath my lids
from the day my son went down beneath your hands…
day and night I groan, brooding over the countless griefs,
groveling in the dung that fills my walled-in court.
But now, at long last, I have tasted food again
and let some glistening wine go down my throat.
Before this hour I had tasted nothing.
(from the Robert Fagles translation)

The bitter irony of finding relief from the grief caused by your son’s murder only at the hands of his murderer is Greek through and through. It is also close to the humanism of Rembrandt, a humanism that shows human beings in their fear and trembling not because this is a weakness, but because it is human beings standing at the very core of what it is to be human. Truly Rembrandt understood a lot about light and color and shape. But in his case the mastery wouldn’t mean so much without the feeling, the basic intuition that guided his brush. The faces that emerge out of the dark backgrounds of Rembrandt’s canvasses are emerging into the empty space of existence itself. He is painting the peculiar situation of a specific kind of creature. The more years this creature accumulates, the more inclined it is to gain a kind of difficult wisdom, an empty wisdom that is nevertheless profound. It is the wisdom of rational creatures who have learned just enough to know what they’re in for and who endure it all again and again anyway, flashing out for a moment with our bright faces and frightened eyes against the anonymous darkness from whence we came. • 27 September 2007