Just past the front door, in the Atrium of the Corcoran Gallery of Art in Washington, DC, are six “ideal” busts. The busts are installed near window ledges and against walls, high above the floor, so that everyone is guaranteed to walk right by them. The busts are female figures, carved in white marble. Their faces are posed in the neoclassical style – impassive, serene – with pupil-less eyes cast blindly down, or toward an invisible horizon.

Four of the ideal busts in the Corcoran Atrium belonged to the banker and philanthropist William Wilson Corcoran himself. Most were made by the American Hiram Powers. A seventh bust of the eponymous Corcoran – created by the sculptor William H. Rinehart – joins the women in the Atrium. Corcoran’s shoulders are swathed in fabric and his chin tilts nobly upward, so that he too has a classical air. Beneath his chin, the bulbous sags of a middle-aged man.

The Corcoran Gallery busts were made in the Victorian Age. They were called “ideal” because they expressed sentiments of the refined and noble kind. In ideal sculpture, men and women are portrayed as mythological beasts, or great historical personalities, or religious figures. It is a form of sculpture that originated with the ancients. In ideal sculpture, man is ordered, reasonable, beautiful.

The Victorian Age, by most accounts, was dirty and crowded and busy. It was an age in which nobility and refinement were greatly valued because they were so fragile. Ideal busts like those in the Corcoran Atrium were not made for museums or galleries. They were made for private homes, to be installed in the parlor. Sculptors like Hiram Powers could hardly keep up with the demand for ideal busts. Still, even as Powers churned them out, his ambitions for the busts were high. Powers called his sculptures “unveiled souls.” The ideal bust shed the body to reveal what was within.

Why did we create a form of sculpture that gives us only the head, neck, and shoulders? Perhaps it is because man is made of dust but pointed to the stars. Our heads drag our cumbersome bodies around town. We move hunched over, propelled by the weight of our thought-machines. We are mental locomotives. Only what rises above the shoulders is truly important. What lurks below the heart is dark and hidden. Our heads are the keepers of our brains and our eyes. Our bodies hold our inner stuff. Our motion may be in our legs but our dreams are in our skulls.

It seems natural that we would create a form of sculpture expressing this Cartesian inclination. A bust has just enough body to hold up the head. Nonetheless, a head alone will not suffice. A disembodied head evokes the guillotine and the sword. As a sculpted portrait, a simple head on a stick won’t do. But no one can say exactly how much body is enough, or too much. This is at the discretion of the artist. The bust artist must ask: Are the neck and heart and shoulders a mere plinth for our minds? What below-the-head parts of a person are necessary? Is something more revealed in a head, as Hiram Powers thought, when the body has gone away? 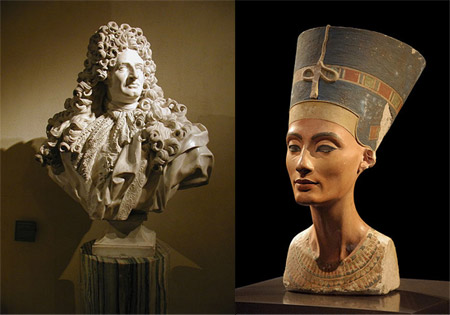 Consider, for instance, the French 18th century sculptor Jean-Baptiste Lemoyne’s bust of the Baroque architect Jules Hardouin-Mansart. Hardouin-Mansart’s body stops just below the breastbone, allowing just enough room for his cascading wig. From this, we can infer that Hardouin-Mansart is probably wearing fancy shoes. No more of his body is needed to tell us that he is fat. Lemoyne seems to have felt the body of Hardouin-Mansart would distract from his lofty head, as it does in painted portraits of the architect.

Or consider the famed Nefertiti Bust, which lives isolated in a room at the Egyptian Museum in Berlin. The bust is mostly just a long passage of neck that attaches an extraordinary headdress to a broad floral collar. Nefertiti’s face is the stuff of poetry, but without the neck, the woman is all decoration.

Or we can look to the busts of ancient Greek sculpture. Holding up the head of Bust of a companion of Ulysses at the British Museum is a crescent of collarbones and protruding sternum. The head is turned away in desperation. The empty space below him is powerful with questions. Is he holding a weapon? Are his feet bare as well? Is his body poised to run from the Cyclops or pointed to the Sirens?

The bust, in short, is really a form of sculptural shorthand. A bust hints to the body, gestures to the existence of a full person without considering the rest necessary. The bust suggests that, in essence, human beings are heads with just enough fleshy stuff underneath to do the dirty work.

For a short time, Modern artists tried to make “torsos” instead of “busts,” having become exasperated with the tyranny of the head. Rodin had a particular fascination with torsos. He carved torsos sleeping, walking, falling. He called these “partial” sculptures études. Around the time of the First World War, the sculptor Jacques Lipchitz visited the just-opened Museé Rodin and was taken with the torsos. “I did not want to make torsos,” Lipchitz later said, “but at that moment I understood that a work of art needs the element of mystery.”

The ideal busts in the Corcoran Atrium, so popular in their day, mark the historical end of our enthusiasm for busts. They are the last of their kind. On Proserpine, a bust modeled by Hiram Powers in 1884, a wreath of acanthus leaves, symbolizing immortality, hangs across her upper chest. The exposed right breast of Powers’ America is a force beneath her poker face. It is a mountain and a weapon. And below the breasts of these ideal women, nothing more than air. On the day I visited the Corcoran, the sun shining into the Atrium windows shot the busts through with luminescence. Half-women, the light seemed almost to complete them. • 5 September 2014