In the North New Jersey town where I grew up there were two supermarkets: Food Fair and Acme. We went to them for the necessities of life, as well as the luxuries: Sara Lee cake, Pepperidge Farm cookies, and the exciting new alternative to American cheese, Jarlsberg. No one thought about these supermarkets much, though I remember feeling confident they’d be able to stock an air raid shelter (it was the tail end of that era); their supply of canned goods was impressive.

As I approached high school, Food Fair, in the manner of old generals, faded away, while Acme continued to limp along (as it still does), its dignity, like its produce, somewhat bruised. Then, in the early 1970s, with the advent of disco, Watergate, and platform shoes, a new supermarket made an appearance in town. It sprung up, suddenly, on the lot where a realtor and a bank used to be. It sported a simple but highly descriptive name: Kings.

Kings was a supermarket different in kind from anything we had known before. It had the pristine dazzle of a high-end boutique. The produce was plump, the meats pink, the seafood plenteous. Our family had mostly subsisted on roast chicken and meat loaf, so the very idea of so much fish swimming into our ken was a great novelty. And there were other surprises: banana bread, dark chocolate, artichokes, Brie (exotic fare for the 1970s) — not to mention prepared foods that promised to open vistas of leisure for the suburban housewife.

What I remember most vividly about Kings were the samples and demonstrations: women in toque hats showing us how to make chicken Françoise on a little skillet; Tupperware containers with cheese cubes and slices of pepperoni and olives; chunks of bread and cake that we could stuff into our mouths and then go back for more. Going to Kings was like going to a cocktail party where kids were invited and where there were no drunken men and sour women with too much décolletage (this was the tail end of the cocktail party era, too). On a Sunday, you met half the town at Kings, and I suspect many a divorce and remarriage was made over the cheese samples.

When I went off to college, rumor had it that one of the Kings’ sons (a wonderful epithet, though his name wasn’t Kings but something Eastern European) was enrolled. I eventually met him, a well-brushed boy who wore expensive sweaters, but, to my chagrin, he never asked me out. Later, I learned that he started his own catering business and became a mogul in his own right.

Some years after I graduated from college, Kings was sold and devolved into mediocrity under the ownership of a large corporate chain. By then, however, I was living in Manhattan and had access to Zabar’s and Balducci’s.

But you can’t raise children in Manhattan, and so I eventually returned to the suburbs, this time to South Jersey, and re-encountered the world of suburban supermarkets. There was Acme again, that reliable old workhorse, but also Zagara’s — a specialty supermarket that reminded me of Kings, only with an Italian rather than a Jewish flavor. In keeping with the expansion of the global market, Zagara’s had even more exotic foodstuffs: sun-dried tomatoes, prosciutto straight from Italy, 20 varieties of freshly baked bread, 50 varieties of cheese (with samples). Zagara’s was the social meeting place of the area, too. On Sunday mornings, I wheeled my children through the aisles, waiting for my pound of whitefish and nova, bumping into friends and acquaintances, giving the baby a piece of French baguette. Still, less than a decade after it opened, Zagara’s, like Kings, was bought by a large chain and its quality sunk even more precipitously than Kings’ had. Many of us pretended that it was the same longer than we should have, bringing home the fatty prosciutto, the stale bread, the prepared foods that bordered on the inedible. Finally, we dropped away and slunk back to Acme.

It would be wrong to say that the following years were without a supermarket alternative. There was Whole Foods, much loved by many of my peers. But for me, the place was too fiercely organic and concerned for my health (too many sprouts, no diet soda). Still, I had begun to develop a taste for tofu when I began to hear the rumors. First it was the murmur that a wondrous supermarket existed further north. Then came rumblings that it was coming to our area. The promise persisted for so long with so little evidence to support it that it began to seem that, Beckett-like, we would wait forever for this utopian supermarket. Finally, however, something began to happen on the large lot near the YMCA. A foundation that seemed to go on forever emerged from the rocky soil, and a structure reared its head like the spires of Camelot. There was no longer any denying that Wegmans had come.

The entire town and its environs showed up for the Grand Opening — with the result that people had to park their cars in the Acme lot a half mile away. The throng in the aisles was too great to push a cart. People with small children found themselves stranded amid the prepared foods for an hour trying to make headway. Fortunately, they could ply their children with garlic hummus and mini-crabcakes. 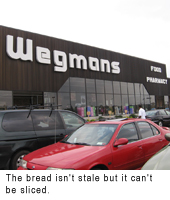 The circus had come to town, and the barkers were older men and women (Wegmans has a geriatric-friendly employment policy), handing out squares of Wegmans pound cake, crackers with Wegmans cheese spread, and little cups of Wegmans gourmet coffee. The place was as huge as a football field, and it had the advantage of having both an organic section (with sunflower placards in case you want to avoid it) and a plethora of tasty, unhealthy foods. There were stations devoted to meat, fish, cold cuts, prepared foods, kosher foods. There was a Chinese food bar, a salad station, a hoagies station, a sushi area.

The prices, except for certain specialty items and prepared foods, were excellent. You could buy toilet paper and deodorant, milk and juice, at prices as good if not better than the Acme.

I’d like to say that I’m now entirely content, my every culinary whim satisfied. But it wouldn’t be true. “When the gods wish to punish us, they answer our prayers,” wrote Oscar Wilde. There is great variety at Wegmans, but the place is too big. And the food, as good as it is, is always the same sort of good. There are strictures as to what can and can’t be done that come down from headquarters. The fresh bread, for example, can never be sliced. The sandwiches are always the same: roasted vegetables on Ciabatta bread, roast beef and peppers on crusty French, tuna and lettuce on pumpernickel, and a several other immutable combinations. If you want half a sandwich, you must have a small container of soup to go with it — that’s a Wegmans rule. The soups cycle through the same five or six choices. The prepared foods are always the same, except when an item is replaced by something else (presumably owing to market research that says it hasn’t been selling).

Am I being whiney and ungrateful? Yes. Wegmans responds to every item on my consumer wish list. It has consistency and dependability. It won’t be sold to some large chain that will destroy its quality, as was the case with Kings and Zagara’s. But that’s the problem. It is the large chain. It’s the specialty market gone corporate. In the tradition of American cooptation of the alternative option, it has made the alternative option into standardized fare.

I think I understand how Adam and Eve must have felt in the Garden of Eden. God gave them everything they could ever want, but the offerings were so standardized and became so familiar that they eventually grew weary of them. They wanted something that the Almighty hadn’t market-researched to suit their tastes. Seeking this aberrant shopping experience, they overreached and fell out of grace.

I don’t know if I’ll have that opportunity, though. I doubt that a corner deli could survive within 20 miles of Wegmans. • 5 September 2007