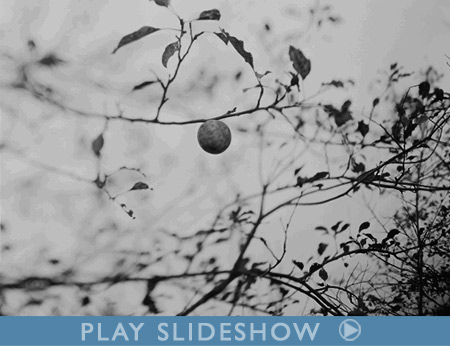 Andrea Modica and the Apples of History

Does any fruit hold a greater grip on our imaginations than the apple? To the Greeks it was the fruit of the Tree of Life that grew in the Garden of the Hesperides; in Norse mythology the fruit of Iduna’s tree that kept the gods forever young; and in the Judeo-Christian Eden, according to both John Milton and tradition, the fruit of the Tree of Knowledge — the knowledge of Evil, as well as that of Good. These are all potent endowments for the modest apple. And yet, even though it is one of the sweetest of fruits and actually a member of the rose family, it has, at least in myth, more often than not carried with it the tart smack of misfortune. It led to the fall of man; precipitated the Trojan War when the goddess of discord tossed a golden one inscribed “for the fairest” into a banquet; caused Atalanta to lose a famous race, her good fortune and virginity, and to be turned eventually into a lion. It would have caused the death of Snow White had it not been for Prince Charming. For all the apple’s popularity as a food, its ability to keep doctors away, and its aid in the discovery of gravity, it seems to possess a troubling gravity of its own. We speak of certain people as “bad apples,” don’t like “apple polishers,” and know that it only takes a single “rotten apple” to spoil a whole barrel. In Latin the word for “apples” and “evils” is the same — mala. And consider that evil man who had an apple placed on the head of William Tell’s son. Why the apple? Why not a cherry, or of the smaller fruits, vegetables, or nuts that would have been far harder for Tell to shoot from his son’s head? Unless somehow the apple was the right one.

Suffice it to say, apples are part of our cultural identity — and quite often an ominous part. So why has one of the finest American photographers turned her eye to this fruit? Andrea Modica is obviously attracted to the apple’s beauty, yet that is not what she is photographing. Some of her apples are withered or lie scattered and decaying or do not particularly look edible. This new series of Modica’s, however, is perhaps her most beautiful and thrilling work. And part of the thrill, I believe, lies in the fact that she has captured that darker gravity of the apple and is, I think, the first photographer who has ever done so.

One could almost say that the history of photography has been strewn with a windfall of apples. Fox Talbot, one of photography’s inventors, photographed them in the 1840s, and Le Secq, one of the foremost French pioneers, has a famous study of apples from the 1850s. Heinrich Kühn, Austria’s greatest photographer, took one of the first color photographs of apples around 1907. Stieglitz, possibly thinking of Eve, posed a beautiful nude girl with apples, while Steichen took an even more seductive, yet fully clothed, portrait of his wife smiling joyfully and wantonly over an apple from which she’s just taken a bite. And the list goes on to the present day. Who hasn’t photographed apples, one might ask? But no other photographer has caught them like Andrea Modica has.

In an essay on Modica’s most well-known and poignant body of work, Annie Proulx describes her photographs as “caught moments in lives ruled by hard situations,” photographed “in an atmosphere of . . . generations of lost chances and bad luck.”1 Modica has an equally disturbing series of photographs of skulls from mass graves found on the grounds of a Colorado state mental institution. Ann Beattie, writing about these and several of her other most haunting images, says, “In these photographs, death is a fact, and death is the stuff of fiction.”2 Death, bad luck, and hard situations. Are they not also that mythic stuff of apples?

I asked why Modica had turned her eye to this fruit. It’s obvious. She is the ideal artist for apples — not the pretty apples of grocery store displays, but the apples of our history. Her work may be disturbing, but it is never horrific, and it is always beautiful to look at, even when she confronts death. Modica’s apple portraits are so rich, so beautifully printed, and so emotionally compelling that a viewer could easily be captivated enough by them that his eye did not see beyond their beauty. And that is a valid, legitimate way to view and appreciate them. They are beautiful! Modica’s use of focus accentuates the apples’ beauty, even the withered ones. She manages to bring them so close that they look as if you could reach out and pick them. Their closeness seems to seduce and invite us into the picture. But if we could enter one of these photographs, would we, on closer inspection of the background, want to? Are those woods not more than merely dark and deep? Is there not something sinister in Modica’s soft, dark, and consciously blurred backgrounds? They seem at times a dream of death, the haunt of the Blair Witch or Snow White’s jealous rival.

It is Modica’s genius that she can yoke conflicting emotions of beauty and terror into the same work — and she does this in almost all of her photographs. She stops our eyes and holds them with the beauty she has crafted, yet as we linger before it, she forces us into more penetrating looks at what she has actually created — meditations on change, process, and decay, meditations that remind us of poet Wallace Stevens’ famous line: “Death is the mother of beauty.”

Andrea Modica is one of our great photographers. Her work has been exhibited at Metropolitan Museum of Art and other major institutions and is in the permanent collections of some of the world’s leading museums. But those are not the proofs of her genius. The proofs are always in the depths of an artist’s insight. In this work she took us where no other photographer of one of the world’s most photographed objects ever took us: to the dark, ancient root of the apple’s hold on our imagination. • 4 September 2007