We’re proud to announce the launch of Smart Set Press with its flagship series Planet of the Grapes, a new series of quarterly digital wine guides. Volume 1: Alternative Reds explores off-the-beaten-path red wines that offer a wine lover — whether a newbie or an experienced connoisseur who’s stuck in a rut — a different path into the world of wine with over 140 recommendations. In this excerpt, author Jason Wilson discusses carménère — lost in France, mislabeled in Chile, and found again. Read on below, and get Alternative Reds today from Smart Set Press.

During my post-undergrad years in Boston, in the early 1990s, I drank a lot of New World red wine. Most of it was purchased in large bottles for very little money, and it was generally taken to the kind of dinner party where someone had made a bad vegetarian lasagna and someone else had tried to make tabouli, and we all crowded onto a musty couch and ate off mismatched plates. The host might have had to borrow a corkscrew, and it was inevitable that one person would have to sip wine from a coffee mug.

The reds we drank in those days were mostly merlot and cabernet sauvignon and zinfandel. This was still a full decade before Sideways popularized pinot noir and demonized merlot. Malbec was almost unheard of. The wines we bought from the bargain bins were drinkable, though they were the kinds of wine that, after a sip, would prompt you to say, “Yep, this is a red wine.”

This is not to say that wine didn’t matter. For my grad-school classmates — aspiring novelists, poets, playwrights, and critics living from one university fellowship to the next — wine was an essential prop in the intellectual role-playing we all did. I was only 22, and only months before been living a blissful Vermont undergrad existence of watery keg beer, Phish, skiing, flannel shirts, bong hits, and Jägermeister shots. Now, as the youngest in my program, I’d wandered straight into an overwhelming milieu, where I was expected to have an opinion on things like postmodern literary theory and Derrida. I was expected — this being the height of the cultural wars — to argue for reading more “multicultural” literature and against the established canon of so-called “Dead White Males.” I was expected to understand what the word “hegemony” meant. I was expected to like jazz.

Wine often fueled the ruthless gossip, rivalries, posturing, and schadenfreude that is the lifeblood of any group of writers: (“Can you believe Professor X told Lynn she should give up her literary ambitions and consider writing Young Adult novels? Burn.”; “Can you believe so-and-so slept with that Indian poet?”) In those days, wine was an element of a “sophisticated” or “classy” world of aesthetic judgements and theories of which I only had a shaky grasp. In this world, I always felt I was traveling on forged documents. 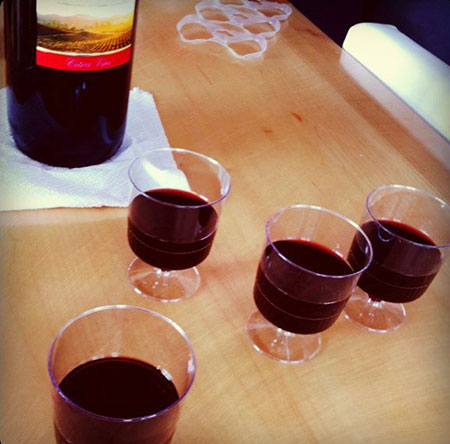 I remember one party, in Beacon Hill, where I brought a 19-year-old girlfriend whom I’ll call M. M was not a writer. She was a Deadhead and a Jersey girl who was about to become a community college dropout, and she was hanging out at my apartment in Boston trying to decide what to do next. She was pretty and sexy in a hippy-ish way, and she always had a faint scent of patchouli and had a cute tattoo of a daisy around her ankle, which in 1993 was still relatively edgy.

When we arrived, M caused snickering among the writers when she gave our host a big hug and squealed, “Liz, this is such an eloquent dinner party!”

Someone’s older date then arrived, an insufferable guy, a newspaper reporter who’d introduced himself by saying, “I’m a literary journalist, a New Journalist. I write creative nonfiction.” He made a big deal out of the wine he’d bought. “This Turley zinfandel is amazing,” he said. In my imagination, two decades later, he wore an ascot and a jacket with arm patches, but more likely he just wore a Polo shirt with a popped collar. “There’s nothing better than old-vine zinfandel like this,” he said.

He turned to M and asked, “Would you like some zinfandel?”

“Zinfandel?” M said. “What kind of zinfandel is that? It’s red.”

“Red zinfandel?” she said. “Ha. Dude, how strange! I mean, I know white zinfandel. But red zinfandel? Too weird!’” She raised her eyebrow and shot me a get-a-load-of-this-guy look.

“What did you bring?” he asked me, with an amused smile. At that time, my usual strategy was to bring a bottle of inexpensive California merlot to these gatherings. There was something comforting and safe about the soft, plummy flavors. That night, however, I’d brought one from Chile that I’d found on sale.

The New Journalist poured a taste and swished it around in his mouth. “Hmpf,” he said. “This merlot is too green, too savory. Napa Valley merlot is just so much fuller, so much more fruit-forward. This one, I’m sad to say, is lacking.”

He took another sip and swished it again. He considered it for a moment, and then grandly delivered his judgement: “Nope. I’m afraid this Chilean merlot just isn’t ready for prime time.”

He dumped the rest of his wine in the sink and I stood there awkward and flustered. M sensed my embarassment and sweetly put her arm around me and leaned in close. “He’s kind of a jerk,” she whispered. “Besides, I think he’s saying it wrong. Isn’t is pronounced mer-LOT?”

Two decades later, I smile to think that this odd Chilean merlot we tasted was most likely mislabled carménère.

Which means the jerky New Journalist was both intuitively right, and yet totally wrong, at the same time — a state of being that is fairly familiar for a wine critic. The wise Robert Parker once said: “My personal philosophy is, you can be sure of nothing.” 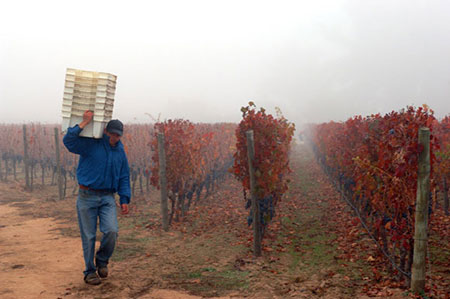 In 1993, no one believed carménère existed anymore. Until the late 1800s, carménère had been one of the prime grapes blended in Bordeaux. But it was thought to have mostly died off in the late 19th century, during the great epidemic of phylloxera (a devastating, sap-sucking insect) that killed off so many vineyards in France.

Then, in Chile in the early 1990s, winemakers got a hunch that much of their merlot might actually be carménère, and that eventually was verified through DNA testing by French viticulturalist Jean-Michel Boursiquot. How carménère got from France to Chile, and thrived, no one knows for sure. But for some reason, phylloxera has never threatened there.

Suddenly, Chile had its very own Bordeaux grape variety, just like neighboring Argentina with its malbec. As winemaking in Chile has improved carménère is really starting to come into its own. What I like about the best carménère is its distinctive pepper; spice; and deep, dark fruit character, more plum than berry. When it’s good, there’s really nothing like it.

The grape has been found to have very high concentrations of compounds called methoxypyrazines, which in some wines produce a strong herbaceous or green pepper aroma — even higher than, say, cabernet franc or cabernet sauvignon. At times, that can be a flaw: When carménère smells too much like musty bell pepper, it’s out of balance.

But when you get a hint of spicy green pepper on the nose, along with jammy or stewed-fruit notes, carménère can be delicious. Some of my friends who tasted with me puzzled over what to pair it with, but I think carménère works well with spicy pork, Indian food, barbecue or braised short ribs. I even enjoyed it with a Korean taco. 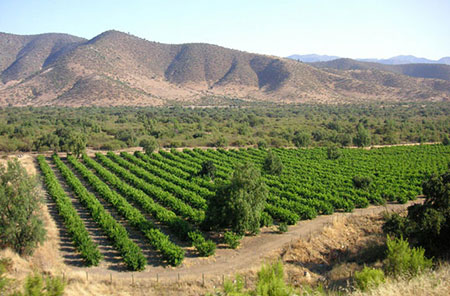 Though I didn’t find many 100 percent carménères from Chile I would want to pay more than $20 for, I discovered a bunch of great-value wines in the $12-to-$17 range. I also appreciated carménère that was blended with just a bit of cabernet sauvignon — maybe five to 10 percent — which gave the wine structure.

As I delved deeper into carménère, I learned that Inama, one of my favorite producers in Italy’s Veneto region, has been innovating with the grape. Apparently, old carménère vines also existed in the Colli Berici area near Vicenza, but they were thought to be cabernet franc until DNA testing proved otherwise. Inama, in fact, traced carménère all the way back to the Dalmatian Coast and Albania, where it also still exists.

Inama’s carménère has been so well received that the winery has invested heavily in planting new carménère vineyards. “I see carménère from the Colli Berici DOC being elevated to the world stage,” winemaker Stefano Inama said in an e-mail. “Some might say it is crazy, but that is what was said about cabernet sauvignon from Bolgheri and Sassicaia in the 1970s.” For now, its Oratorio di San Lorenzo, at $65, is in a class by itself, the finest 100 percent carménère that I tasted. But its more affordable Carménère Piu ($20; a blend of carménère and merlot) is also a winner.