My grandparents bought the house at the end of the row at the very edge of the city when my father was one year old, in 1938. Facing South Olden Avenue, the gray clapboard and brick building was set in from the corner of Pierce Avenue and given a side yard ample enough for one more house, as if the builder had anticipated the day when corner buildings in old cities would go vacant and be demolished, and the land assigned to the house next door.

My grandfather, whose name I share, liked flowers, which he tended in the yard. He planted a pair of trees, one of them a dogwood. He put his dental office in the front of the first floor of the house, and the family, including my father’s older brother Joel, moved into the back and upstairs. A contractor was hired to enclose the front porch with glass brick for the waiting room (the zoning code stipulated that an enclosed porch had to allow in light).

When my father, David, turned 13 the family moved to a larger house in a leafier neighborhood on the other side of the city. That’s where David found his father, at 53 in 1953, dead of a heart attack.

Another 13 years later, after going to dental school and serving in the Army, David opened his own practice in the old dental office. Joel had moved to Washington, DC, where he would become an influential economist.

As a boy, I always imagined I would learn to be a dentist and take over the office in Trenton from my father. The window sign, with my name on it, had long ago been made.

In Rabee Jaber’s novel The Mehlis Report (New Directions), just published in the English translation by Kareem James Abu-Zeid, the 40-year-old protagonist Saman Yarid is the head of his family’s Beirut architecture firm, founded by his grandfather, the first Saman Yarid. Saman inhabits the old family house, a relic of a time when the neighborhood was filled with aristocratic families. He naps on the cushions embroidered by his grandmother and walks the old neighborhood Achrafieh, only to see the landmarks of his childhood that had survived the 15-year civil war disappear in a manic rush of construction.

But Saman’s Beirut is on edge. Terrorist attacks continue as the city awaits the United Nations report on the assassination of Prime Minister Rafiq Hariri, wondering if the truth will ever come out. His firm is down to three architects. Despite all the construction around, none of them seem to do much more than make coffee. And Saman is alone, the last of his family to remain in Lebanon. His sister Emily lives an intellectual’s life in Paris; Mary, in Baltimore, runs a successful Middle Eastern restaurant. On edge because of news reports about the continuing danger in Beirut, the sisters call and beg him to leave. “What’s keeping him in Beirut?” they want to know. “Why doesn’t he leave for France, or Baltimore? What’s keeping him in this city?”

When my father was in his 30s, my uncles who still kept their family law practice in Trenton decided to move out, to a new corporate park in the suburbs. Eventually, the pharmacist a block from the dental office sold to a chain; the deli closed; and later, when I was in college, the Catholic school across the street shut its doors. Even the gas station disappeared — and nothing ever replaced it.

“What’s keeping you?” That’s what everyone wanted to know of my father. You should move the practice, they said, to a large modern building in a good area. He would meet with realtors, visit these places, enter the numbers in the spreadsheet in his head. And nothing would ever come of it. In Trenton, crime began to worsen. The elderly seamstress around the corner was beaten and stabbed, the place robbed. In Beirut, reports of violence mount; Saman’s sisters are fraught. “Why is he clinging to these streets, why is he holding onto this city?” My mother, Joan, would understand how they feel.

In the late 1990s, David began to work with the other remaining business owners on a plan to improve their part of Trenton, at the edge of the traditionally Italian American section called Chambersburg. The mayor said he would do whatever he could do to help. Someone opened a Dunkin’ Donuts on the corner where the old hardware store had been; eventually, city crews came out and installed retro turn-of-the-20th-century street lamps in the main shopping district.

But it turns out places don’t endure because of nostalgia; likewise, people don’t cling to them because they lack reason. Rather, place — physical space to which we ascribe meaning — holds a kind of perplexing, mysterious power. “It’s like your guts are tied to Beirut’s, and you don’t know why,” says Saman’s third sister Josephine. When she was 21, during the civil war, Josephine was abducted from outside the National Museum, beaten, and killed. She’s observing her brother from a hidden city of the dead.

When my father was in his 60s, Miss Buggeln, an elderly lady who lived in the apartment above his office, had a stroke and died. David moved his desk, where he would consult with patients about their treatment and review their cases, into his old bedroom. He turned the kitchen into a staff lunch room. The office computer was set up in the living room.

Recently, I was asked to write the introductory essay for a friend’s book of photography. For the past few years, the photographer, Jack Carnell, has been traveling in and out of county seats of Georgia and Alabama, West Virginia, Ohio, and Indiana — forgotten rural Trentons — in search of enduring evidence of the human hand: The thousandth coat of paint on a wooden bench, the permastone installed on a side wall, a wreath in a window. It’s not the death of these places he’s interested in, but the seemingly irrational, yet terribly circumscribed life.

Like me, from time to time Jack dips back into the choked landscape of William Faulkner’s Yoknapatawpha County, Mississippi. In Requiem for a Nun, he reminded me, Faulkner delivers the history of Jefferson, the fictional county’s fictional county seat, and recounts the courthouse’s inchoation from its “morticed-log mud-chinked shake-down jail.” Eventually, administrative needs having surpassed the capacity of the primordial jail, the town fathers come upon the conceit of hiring an architect to design a county courthouse, that would, they knew without even knowing, “raise all of their hopes and aspirations level with its own aspirant and soaring cupola, so that, sweating and tireless and unflagging, they would look about at one another a little shyly, a little amazed, with something like humility too, as if they were realizing, or were for a moment at least capable of believing, that men, all men, including themselves, were a little better, purer maybe even, than they had thought, expected, or needed to be.”

Jack’s photographs, it seemed to me, were meant to reveal the necessary melancholy of holding onto that pretension against the impregnable force of time.

In Beirut, Saman ignores his sisters’ pleas as he floats from the bed of one girlfriend to the living room of another, as he roams the streets of his neighborhood recounting in memory, as if to push back against time, a catalog of the buildings and places that used to be.

In Trenton, my father persisted in running his office in a neighborhood that seemed itself to barely hold on. Trenton’s mayor faced criminal indictment; gun crime peaked again; the last of the neighborhood’s middle class icons, a pizzeria that had opened in the 1930s whose owners had long been my father’s patients, decided to leave. When I was a kid, on Friday nights he would walk over from the office to the pizzeria and join us for dinner. Now, at 75, he was working the same 12 hour days he’d worked at 40, unaware or unwilling — or purely obstinate — to accede to time or expectation.

Saman wanders the neighborhood around the family villa, designed by his grandfather, feeling “as if he is speaking with his grandfather whenever he passes by.” From behind the pale, Josephine watches Saman, knowingly it seems. “He feels the burden of time on his shoulders,” she says. “As if, this past year, he’d lived forty years in a single stroke.” Saman is walking home after a swim when he is struck by a heart attack in front of the Balthus restaurant and dies. 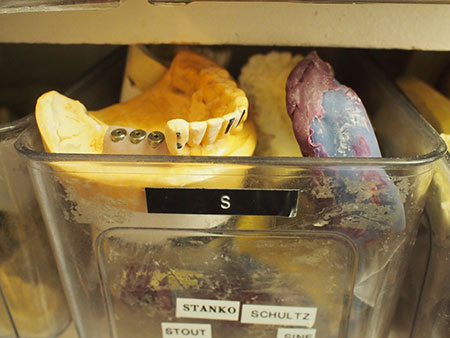 A year ago, David reached a deal with a suburban dentist with a modern office. The dentist would purchase my father’s practice and employ him to work three days a week. On the last day on Olden Avenue, I came by with my camera. I wanted to elicit the power of the place — its hold on him, his hold on it — but also the surprising power the place had on me. As a child I spent hours in the tiny lab, working with the clay my father used to make his precise impressions, or in the basement filing patient records, allowed to go out on lunch breaks to the five and dime or the deli to get our sandwiches. In the neighborhood, my father was “Doc,” probably as his father, Nathaniel R. Popkin, D.D.S., had been.

On the last day of the office, when I returned to photograph it, I found myself drawn to the signs and messages written in his hand affixed to the walls, the trays of clay impressions, the shadowy yellowish e-ray films, the photographs of family stuck at odd angles on the file cabinets, the scratches mounting in one man’s hand — but more, a family’s, an epoch’s — on the walls of a stout sturdy building. 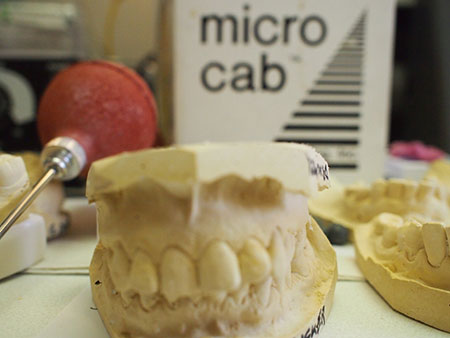 In Jefferson, Yoknapatawpha County, the “shake-down” jail, where once, Faulkner tells us, at the end of the Civil War, a young girl had inscribed her name on a window before she was taken to be married to a man who owned land in Alabama. The inscription has survived long enough to interest tourists. And now, in the author’s imagination, we the tourist stand there aware of an almost overpowering sense of that girl’s life, the prosaic sadness of her imprint there, “the old milky obsolete glass, and the scratches on it: that tender ownerless obsolete girl’s name and the old dead date in April almost a century ago — speaking, murmuring, back from, out of, across from, a time as old as lavender, older than album or stereopticon, as old as daguerreotype itself.”

Last week, my father finally had his old patient records shredded. In an e-mail with subject heading “Gone,” he wrote, “500 lbs of paper, 6000 patient charts and 15 very old steel file cabinets.” A man who designs floral arrangements for weddings and baptisms and christenings wants to buy the old office. He’s going to break down the walls that divided the waiting room and reception and the operatories for a studio and live in a small apartment at the back. My mother told me he was struck by the history of the building. As they walked around the office, my mother said, he kept coming back to it. She said she was sure it had taken a hold on him. • 21 August 2013