The United States of America has a short history compared to other nations. This does not stop it from having more historical societies than seems possible. Most American historical societies were founded between the late 19th and mid-20th centuries, to preserve records and artifacts of a rapidly dissolving local way of life. Today, there are roughly 10,000, all across the nation.

Most things, however, in an American historical society museum are just that, things. They are ordinary objects from the not-too-distant past. They are the stuff of basements, like what you might find at a yard sale, or landfill. Yet, put under glass and labeled, and the things take on a magical air. The more mundane the things are, the more you wonder why they have been saved at all, the more magic they seem to have. 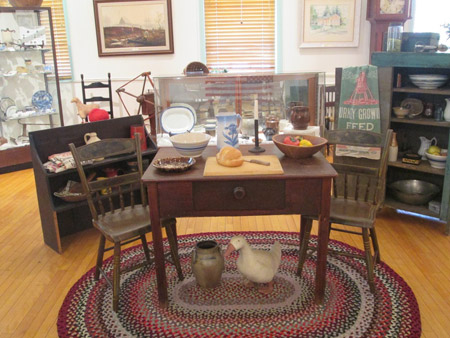 A collection of “things” at The Bethlehem Historical Association Museum

“All around us are things,” the philosopher Heidegger once wrote. We make things, see things, are surrounded by things — but what, he asked, is a thing? A jug, we might say, is a vessel, created by people to hold water. It can be lifted by a handle, and can also stand alone, independent of a holder. These are some qualities a jug can have. But do they tell us what a jug really is?

Consider, for example, an old-timey stove. A stove, in everyday life, is just an ordinary object that serves a useful purpose. The stove’s essence — what Heidegger might call the old-timey stove’s “old-timey stoveness” — might be its usefulness, or its color or shape. In everyday life, the stove is most itself when a person is cooking on it (and even more itself, Heidegger would say, if that person is not thinking about cooking or aware of cooking and is just, simply, cooking). In a historical society, the essence of a stove comes from all the people who once cooked on the stove. It comes from the stories about the people who cooked on the stove and the people who collected the stove and its stories. In a historical society, a stove’s essential qualities are not physical — hardness, grayness, or rustiness. A stove is not its aesthetic properties — the engraving on its ash door, its charming ‘old-timiness’. A stove’s true stoveness, once it is placed in a historical society, transcends even its use value — how well it retains heat or gives light. The essence of a historical society stove — as opposed to, say, a new department store stove — is time. It is lived time, to be specific, time lived by people. Better put, though strange to say, the essence of the stove is people. “Man is not a thing,” wrote Heidegger. But her experience is made manifest through things. We can hardly experience the love of two strangers from a hundred years ago. But, in a historical society, you can see a handkerchief with a husband’s initials embroidered crookedly in the corner and say, “Yes, I understand.”

Heidegger believed that the true essence of a thing could be revealed in a work of art. “Truth is never gathered from objects that are present and ordinary,” wrote Heidegger. Art is a thing, but like a man, more than a thing. Art is “the becoming and happening of truth.” This truth of art, Heidegger also believed, was being killed by none other than the museum. In museums, art (and thus things) were ripped out of their real-world context, to be viewed in isolation. In a museum, the De-Contexualized Thing was king, the person inconsequential. In a museum, the artist disappears from the art, the maker disappears from the thing. “Consider,” he wrote in “The Origin of the Work of Art,” “a Greek temple, which once focused the world of the people and which, by its contrasts, brings forth the earth as such… A people’s relation to divinities, to the holy, and the drama of the great decisions of a historical people are focused in the temple. The work sets up a world.” Removed from Greece and viewed in a European museum (for example), the Greek temple became an empty object, disconnected from its world and the people who made it.

The philosopher Adorno, taking his cue from Heidegger (who took his cue from Hegel) compared the museum to a mausoleum. The metaphor was not meant to be subtle. Museums are the places where the truths of things die. They are repositories for the stuff of dead experiences. “The German word, ‘museal’ [‘museum-like’],” wrote Adorno in the essay “Valéry Proust Museum,” “has unpleasant overtones.”

It describes objects to which the observer no longer has a vital relationship and which are in the process of dying. They owe their preservation more to historical respect than to the needs of the present. Museum and mausoleum are connected by more than phonetic association. They testify to the neutralization of culture. Art treasures are hoarded in them and their market value leaves no room for the pleasure of looking at them. Nevertheless, that pleasure is dependent on the existence of museums.

The subtle implication in Adorno’s words is that people like museums precisely because museums are dead. People like museums the way some of us like wandering around cemeteries in foreign places. We take pleasure in objectifying a lost world we do not understand and have no connection to. And, we feel comforted by the collection of the dead around us. We feel embraced by this gathering of strangers who no longer have a place in the world, yet still linger in it.

The Bethlehem Historical Association Museum in Selkirk, New York is open from 2 PM-4 PM on Sundays only, and only when the weather is warm. A photograph of the museum in the museum shows it was once open from 2 PM-5 PM, but that was 1975. The one-room schoolhouse that is now the museum contains your usual fare. The walls are covered with quilts and old wood and pictures stuck up with tacks. There is an oil painting of the Hudson River showing what it might have looked like to Henry Hudson, with a Native American man standing at the river’s edge. On a table are some obsolete farming tools and rusted children’s toys. In a corner, a child’s desk, a slate board and a faded arithmetic book celebrate the schoolhouse itself.

On a visit a few years back, I found myself at a row of portraits when a woman came up behind me. “I’m the town historian,” the woman told me with a smile. “Those people are my family.” She pointed out her grandparents and great-grandparents and then pointed to a picture of a girl. The town historian of Bethlehem told me that the schoolhouse hadn’t closed so long ago, and that her class was the last. “This is me,” she said, and then pointed to the objects in the museum that once belonged to her. Many of the things in the museum were mine, she told me laughing. “This museum,” she said, standing inside the museum, “is almost a museum of me.” • 20 August 2014