In the first few weeks of World War I, Evelyn Underhill published a little book about mysticism. Practical Mysticism: A Little Book for Normal People was written during the last months of peace. But was a book about mysticism for the common man really necessary when the whole world was collapsing? Underhill decided it was, more than ever.

The contemplative life, wrote Underhill, is not some dreamy, silly pursuit; “a game fit only for idle women and inferior poets.” Neither is it a pious “special career, involving abstraction from the world of things.” Mysticism is a call to arms. It is a challenge to engage with true reality, to see things are they really are. “The mystical consciousness,” Underhill wrote in her Preface, “has the power of lifting those who possess it to a plane of reality which no struggle, no cruelty, can disturb: of conferring a certitude which no catastrophe can wreck. Yet it does not wrap its initiates in a selfish and otherworldly calm, isolate them from the pain and effort of the common life. Rather, it gives them renewed vitality; administering to the human spirit not – as some suppose – a soothing draught, but the most powerful of stimulants.”

“We are often told,” she wrote, “that in the critical periods of history it is the national soul which counts: that ‘where there is no vision, the people perish.’ No nation is truly defeated which retains its spiritual self-possession. No nation is truly victorious which does not emerge with soul unstained.” The two women, she wrote, “who have left the deepest mark upon the military history of France and England – Joan of Arc and Florence Nightingale – both acted under mystical compulsion … Their national value was directly connected with their deep spiritual consciousness.”

This was all very well, the practical man might say, but what is mysticism? Mysticism, wrote Underhill, is the art of union with Reality. The average human mind is notorious for uniting itself — not with Reality — but with images, notions, aspects of things. The advertisements on the subway, the magazine article, the new scientific classification become increasingly confused with truth. The windows of life get smeared with all kinds of illusory crud. “Religion, indigestion, priggishness, or discontent may drape the panes,” she wrote. Our opinions, our tastes, our needs, our preferences, our moods become the myopia through which we look at the world. But with effort it is possible to turn one’s attention away from “the tidy world of image to the ineffable world of fact.” 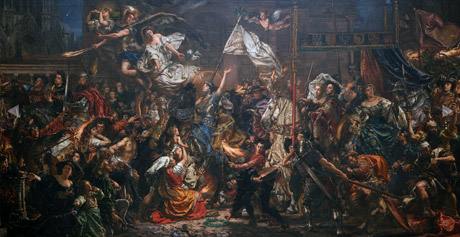 Super, says the practical man. But what is Reality? What is the ineffable world of fact? Only the mystic can answer this question, wrote Underhill, and each person who dips her toe into the mystical life will soon find out for herself. Part of what keeps us from true Reality is that it is, mostly, mysterious. People can’t stand mystery; they find it horrible and awkward. We would prefer, wrote Underhill, to live in the museum-like world of labels. We make Reality into a symbol and lose sight of what is symbolic and what is fact. One thing all mystics from Walt Whitman to Joan of Arc have agreed upon though: Reality won’t be found in the intellect. Better look to, as Keats proclaimed, “the life of sensations,” toward a direct experience of the tree in your yard rather than a picture of it or a thought about it.

Here, the practical man, admits Underhill, might start to feel baffled, if not downright annoyed. Yet most practical persons have, most likely, already had a mystical experience.

Has it never happened to you to lose yourself for a moment in a swift and satisfying experience for which you found no name? When the world took on a strangeness, and you rushed out to meet it, in a mood at once exultant and ashamed? Was there not an instant when you took the lady who now orders your dinner into your arms, and she suddenly interpreted to you the whole of the universe? a universe so great, charged with so terrible an intensity, that you have hardly dared to think of it since. Do you remember that horrid moment at the concert, when you became wholly unaware of your comfortable seven-and-sixpenny seat? Those were onsets of involuntary contemplation; sudden partings of the conceptual veil. Dare you call them the least significant moments of your life?

Almost without thinking, we jump to rationalize these moments or ignore them entirely. We turn them into feelings and dismiss them. The most difficult task is to see these moments for what they are — glimpses of Reality. To see Reality, you have to be directed away from the rickety, temporal self to the unchanging world of the Whole. The task will be a difficult one. Each moment of attention toward Reality will be met by boredom and restlessness. You will be attacked by your own incapacity. The beginning of meditation, wrote Underhill, is a time of warfare. Reality must be brooded upon, seized from distraction, until you have regained charge of your soul. When she begins to accomplish this, the mystic feels within her an abundance of hope, of faith, of optimism. She can go back, then, to the “field and market, tram and tube, office and drawing-room,” and participates in daily life with increased wonder.

Yes, yes, says the practical man, but how is this of any use? How is this to help in wartime? Throughout her “little book,” Evelyn Underhill uses the word “patriot” again and again. Written in peacetime, this word was not meant to be jingoistic. It was not meant to rally men and women to a cause other than the union with the Real. Underhill used patriot in its broadest sense — someone united with the great brotherhood of life. A person who saw herself as part of the Whole — involved in the life of every mosquito, every human, every cloud, as well as with the mysterious stuff that connects them — this was a true patriot. This person was much more likely to survive the irrational cruelty of circumstance, the beliefs of friends and enemies, the tortures of war. A patriot could step back from both evil and good, and remain calm. So you see, practical man, mysticism is useful. Living in contemplation as much as in action is a form of redemption. If people lived as practical mystics, then “that world of false imagination, senseless conflicts, and sham values, into which our children are now born, would be annihilated.”

“Patriots,” she wrote, “have sometimes been asked to ‘think imperially’. Mystics are asked to think celestially” — in other words, to see the bigger picture. And this, not just in spiritual matters but, more importantly, when confronting the sadness, and failure, and degeneration of life.

In the first weeks of the Great War, Evelyn Underhill had a sense of what was at stake in the long run. As a call to active participation in Life, nothing, she wrote, will defend you from the assaults of the outer world so much as contemplation. “You will hear the busy hum of that world as a distant exterior melody, and know yourself to be in some sort withdrawn from it. You have set a ring of silence between you and it; and behold! Within that silence you are free.” • 4 August 2014