In my seventh-grade health class, I was made to undergo the semester-long torture that is abstinence-only sex education. We were made to chant, “Don’t be a louse, wait for your spouse!” We were told that sexual urges could be calmed with Better Than Sex Cake, an out-of-the-box monstrosity that used whipped cream and chocolate syrup as frosting. Basic anatomy was glossed over (“This is a vague drawing of a penis; now who wants to list some fun activities to do with your partner instead of sex?”), condoms were not even whispered about, and most insidiously, we were told that, as girls, if we were raped, it was probably our fault. The men, with their urges, they just have no control, you see.

Working the phone lines at a family planning clinic years later, I saw the results of the spread of abstinence-only education. It was not producing moral, celibate young men and women — it was creating widespread ignorance. I spoke to 20-year-old women who did not know how to put a condom on, let alone how to speak up and demand their partner wear one. Men didn’t seem to understand that pulling out was not an effective way to prevent chlamydia. They were not practicing abstinence, and because they were not given any information on how to stay healthy while sexually active, they blundered their ways through unexpected pregnancies and sexually transmitted infections.

It’s hard to believe how far backward we have gone in terms of sex education. Not that there was ever a sepia-toned time where boys and girls were told it’s OK to be gay, that sex before marriage can be a good thing, that marriage and children might not be for everyone. But there was a time when sex education — and not just “Keep it in your pants, kids” — was seen as an important part of raising moral, healthy citizens. In Susan K. Freeman’s Sex Goes to School: Girls and Sex Education Before the 1960s, she tells us our sex-ed programs were maybe better off 50, 60 years ago:

Educators by the 1940s expressed a belief that students — female and male alike — needed knowledge… By the mid-twentieth century, educators believed that sex education would produce wholesome regard for sexuality and gender rather than untoward sophistication. Although educators in mid-twentieth-century public schools limited the amount of knowledge to offer girls and boys, they did not subscribe to the view that sexual knowledge led to sexual behavior.

Today, religious figures and politicians and parents not only think learning about sex in the classroom will lead to teenage sexual activity, but also that having condoms available will suddenly turn a shy prude into the town slut. There are consequences for these beliefs and decisions, and they include teenagers who think that if they have sex standing up, they are preventing pregnancy.

This ignorance and misinformation is not just in our high schools. In 2003, a fact sheet that gave detailed information on the effectiveness of condoms, as well as instructions on how to properly use one, disappeared from the Centers for Disease Control Web site. In its place was a new fact sheet that played up the failure rate of condoms with a weird, moralizing tone: “For persons whose sexual behaviors place them at risk for STDs, correct and consistent use of the male latex condom can reduce the risk of STD transmission. However, no protective method is 100 percent effective, and condom use cannot guarantee absolute protection against any STD.”

Elizabeth Pisani, an epidemiologist who has worked with the United Nations; the governments of China, Indonesia, East Timor, and the Philippines; and the World Bank, has watched as the discussion about risky behaviors — specifically sex and drug injection — turned from frank to confused. In The Wisdom of Whores: Bureaucrats, Brothels, and the Business of AIDS, Pisani states clearly that when the emphasis is removed from strict prevention and treatment, people die. 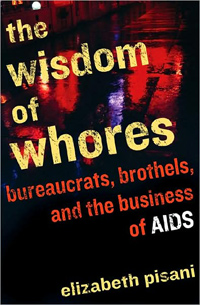 It’s easy to be blasé about HIV transmission in the United States. We have gone from denial to panic to effective prevention back to denial. Once treatment became available, it became a manageable chronic illness, not an automatic death sentence. Now it’s either an inconvenience or it’s that big, overwhelming thing happening in Africa that we could not possibly begin to help. Pisani cuts through the nonsense with a “Well, actually…” and reminds us there are things that work to cut the transmission rates: condoms and needle exchange programs. The reason why they’re not working is our squeamishness about discussing sex and our lack of concern about people we see as useless junkies.

In order to tackle a problem as large as AIDS in Africa, at the very least you have to be able to state the problem. The countries with the largest percentage of infected men and women have a large percentage of their population engaging in risky behavior, whether that be drug use, multiple sexual partners, or a lively sex trade. It’s in vogue now to talk about freeing women from sexual bondage, or finding other lines of work for prostitutes. While that’s nice and all, and should have been in place already, Pisani points out the obvious: Without condoms, education, and clean needles, there will not be many people left to benefit from the microloans and long-term social reform goals.

The countries that have been able to control transmission rates are those who speak clearly and plainly about the dirtier side of life. Pisani writes about Senegal, a country that started its HIV prevention programs while transmission rates were still low and has kept them low: “They wallpapered the country with posters telling people exactly how AIDS was spread, and exactly how it could be prevented. The state presidents talked about the disease, they talked about old men having sex with young girls, they talked about people’s penchant for having many sexual partners at once… Their rhetoric was eventually backed up with massive distribution of well-packaged, cleverly marketed condoms.” After they had control of how many people were exposed to the virus, they could focus on the social reforms.

The United States is currently standing in the way of the more effective prevention programs. It’s not just that our pharmaceutical companies are clutching the patents for protease inhibitors tightly, but the U.S. attaches many strings to its aid money. Even though abstinence programs have not worked for American school children, they are being spread throughout the world. Abstinence is always so nice in theory, but we’re talking about sex workers here. Pisani writes, “If you sell sex to earn your living, avoiding sex is also your best bet for avoiding paying your rent, for going hungry, for not being able to buy medicine.” Condoms and needles are needed, not church sermons.

AIDS is a problem that needs clear vision, and avoiding reality out of fear or religious belief only makes things worse. When the rates of premarital sex go up in a country, HIV transmission rates go down. That’s because if sex is available with a partner, men are less likely to visit prostitutes. It’s a fact that goes against the Christian beliefs of purity and sex in marriage, but it’s still a fact. Not that sex in marriage as a literal practice will keep you from an HIV infection. Pisani writes, “I’ve met prostitutes who have been married hundreds of times. Good Muslim clients perform the wedding ceremony for themselves before starting in on the girl. An hour later, they divorce her. Since they were married while they were having sex, they have not sinned.” Later, those “good Muslims” may eventually marry a woman who is not a sex worker, and may pass along the virus to her. But at least they will not have sinned.

Technically, the new CDC fact sheet is correct: Condoms do fail. They break, people put them on wrong, and sometimes they come off. Sex education is not a cure-all. You can be highly educated about the risks and statistics about STD transmission, and yet still occasionally forgo condoms. This does not make you a bad person. Pisani admits, “I’m as aware about HIV as anyone on the planet. Yet my own history of condom use is somewhat chequered. There’s the pleasure thing. There’s the ‘he seems like a nice boy’ thing. And there’s the second bottle of wine thing.” The United States is trying to spread morality through ignorance, which is bound to fail and take a lot of lives in the process. Abstinence education may convince some of those who take the pledge to delay sex, but “they were also less likely to use condoms when their hormones got the better of their intentions, and they were just as likely to have sexually transmitted infections as kids who never swore off sex.” I can tell you from experience that chants and Better Than Sex Cake do not a sexual prevention program make. It’s best to just admit that people are going to do things you don’t want them to, and prepare them for the consequences. • 30 July 2008