Caravaggio was a son of a bitch. He killed people. He drank and brawled and painted and died. We love him for that, for being the difficult genius, for giving us stories. It’s 400 years since he died and the Caravaggio buzz is up to fever pitch. Everybody wants to talk about Caravaggio.

There is no denying that Caravaggio was every bit as bold a painter as he was a fighter. When you look at a Caravaggio — say, a famous one like “Boy Bitten by a Lizard” (c. 1594) — you feel the impact. The painting shows, undeniably, a boy in the immediate aftermath of have been bitten by a lizard. His face is lit up, his shoulder heaves in upward contortion. The immediacy of the painting — the light, the action, the gestures — makes one feel as if the history of previous painting is being blasted apart. There is truth in the feeling. Caravaggio was done with Mannerism and the Late Renaissance. He was done with the contorted poses and pictorial framing that had lost touch with the actual look and feel of the real world.

If Caravaggio inaugurated the Baroque, he did it as a new naturalism, a new realism. This is something we often forget when we think of the Baroque as a movement of ornament and outrageousness. There is a wow factor, a side-lit theatricality to “Boy Bitten by a Lizard” but the primary impact of the painting is visceral. The sting of it, the shock, the outrage, the fear. The painting is alive. Caravaggio was painting directly from the world again.

The new realism of the Baroque was a funny thing, though. It was not simple or direct. In its return to the portrayal of nature and everyday experience it became, perhaps paradoxically, complicated in its ideas. 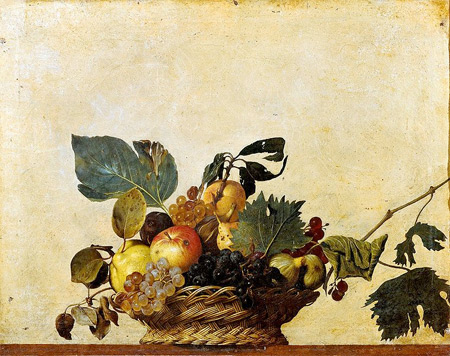 Let’s take Caravaggio’s “Basket of Fruit” (c. 1599). It’s a still life, which was generally considered a lowly form of painting until Caravaggio got hold of it. The fruit in Caravaggio’s basket has seen better days. The apple is worm-eaten. The leaves on a few of the twigs left in the basket are wilting. The grapes have more or less given up. I suppose the pear in the middle is edible, but not for long.

Nature, here, is on the cusp of decay. Life is portrayed in the guise of death. Subjects like the fleetingness of life and the transience of material things are, of course, well-trodden in the history of art before Caravaggio. But the mix of realism and symbolism is startlingly new. In Medieval and Renaissance painting, death runs around in the material world with impunity. He’s on a horse, or in the form of a skeleton or a skull. The physical world is ever caught in the act of pointing at another. The world we live in catapults us toward the kingdom everlasting.

In “Basket of Fruit,” the physical world just dies, passes away. The lot of material things is simply to be material things. The job of a grape is to ripen and then wither. That is all. This painting’s title could be “Basket of Fruit: That Is All.” This attitude does not, however, emerge from or culminate in nihilism, atheism, or any other attitude of spiritual negation. Caravaggio is also the man who painted “Saint Francis of Assisi in Ecstasy” and “The Calling of Saint Matthew,” neither of which can be described as the work of a man hostile to Christian spirituality.

But those works contain a clue to the significance of the naturalism of “Basket of Fruit.” In both “Saint Francis” and “The Calling,” the divine exists uncomfortably in the natural world. In “The Calling,” it is rather a big surprise that Christ has happened by. Matter is not the place for spirit and therefore the two have nothing much to say to one another. Nature is the place of coming to be and passing away. If there is a mystery hidden in that process, it is one that we do not understand, and so no understanding will come of it. The contemplation of a basket of about-to-decay fruit thus carries with it the ambiguous lesson that there is no lesson here. A harsh naturalism indeed, but Caravaggio liked it rough all the way to his bitter and violent end. • 27 July 2010