Last month, I went to the National Association for the Specialty Food Trade’s 56th annual Summer Fancy Food Show, held at the Jacob K. Javits Convention Center in New York. Over three days, more than 24,000 attendees wandered among 2,400 exhibitors hawking thousands of so-called “specialty food and beverage products,” which is a $63 billion industry. In 2009, there were 2,318 new product introductions to the American market — which was actually a bad year. In, 2008, there had been 3,705.

Exhibitors at the Fancy Food Show split into two basic groups. One section consists of booths and rows devoted to food products from a particular region or country. Chile, for instance, seemed to have spent big money to introduce the world to its olive oil, cheese, wine, and the Chilean carica, a cousin of the papaya. Italy, Spain, and France were present, but so were some underdog countries such as Albania, Jordan, and Burkina Faso, all trying to break into the U.S. market. I tasted Nebbiolo wine grown in Mexico, baclawa from Syria, and an orange soda from Slovenia with the unfortunate name of Cockta. One company selling Czech muesli posted a sign that read: “We search for a distributor for North America.” A flier handed out by attractive young women in tight yellow shirts read, “Let’s Do Delicious Business With Brasil.” I saw Miss Italia 2009 and Miss Belgium 2009 wandering around.

The other group of exhibitors was more carnival-like, with small entrepreneurs and large companies pitching all sorts of new novelty products. This is where you find everything from vitamin-infused waters to chocolate-covered gummy bears to wine-flavored ice cream (cherry merlot or peach white zinfandel anyone?) to cups chiseled from chunks of pink Himalayan salt to Cavemen Cookies made “using ingredients that early humans had access to.” A big furry green apple hawked applesauce in a squeezable bag “for kids on the go.” Another company from Austria was touting “Apple to go,” which is basically an individual apple and napkin wrapped in light-weight plastic. “It is possible to advertise using the label or printing straight onto the protective film or the napkin,” read the sales material.

These are my notes from an afternoon spent wandering the Fancy Food Show floor: 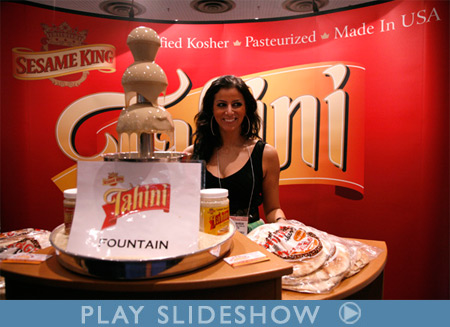 “Would you like one of our spicy pickles?” asks the man in the red apron, working the booth for Miss Jenny’s Pickles.

A serious-looking woman in a pantsuit takes a taste, then jots down some notes in a leather-bound notebook. “Mmm,” she says. “My boss is always telling me, ‘Let’s find the next big thing.’”

“Well, this is definitely it!” says the man serving Miss Jenny’s Pickles.

“Let me ask you this,” says the woman. “Do you have distribution in Canada?”

In northern France, sauerkraut is called choucroute. But perhaps this is very confusing to Americans, who’ve only recently learned that a similar-sounding word charcuterie means “fancy cold cuts.” In any case, at the Fancy Food show, the choucroute-maker André Laurent is calling its fermented cabbage “sauerkraut.”

“We are redefining sauerkraut!” says the Frenchman in the sharp-looking suit. “This is cooked in champagne! We don’t want people just eating this with hot dogs!”

He hands a warm bowl of sauerkraut to a young woman with a nose ring and tattoos, who pokes at it skeptically with a plastic spoon.

“The health benefits are incredible!” he says.

Overheard on the convention floor:

“Someone has bacon lip gloss here. That’s what I heard.”
“Well, that’s the first thing I’m trying to find.”

“Vegan Squid Ring.”
“Those are three words you really don’t want to see together.”

“Wait, this is Belgian champagne?”
“No, no, no. The chocolates are Belgian. Champagne, of course, comes from France.”

Near the entrance to the Fancy Food Show, a sign reads: “Yogurt and kefir the fastest growing specialty food category, up 38.6% in 2009.” Altogether yogurt is a $380 million business.

After I eat some yogurt at the Chobani booth, I walk over to the Fage booth, where I eat some more Greek yogurt.

“Yeah,” says the rep from Fage. “Everyone’s jumping on the bandwagon.”

I am checking out the new teas from Republic of Tea along with two elderly ladies with bags and canes. One of the ladies seems to be a little hard of hearing. I grab a container of Eat Pray Love, named after the bestselling book by Elizabeth Gilbert.

“WHAT’S THAT?” shouts one of the elderly ladies.

“YES! IT’S LIKE THAT NEW MOVIE WITH JULIA ROBERTS!”

I pass the booth for Hong Cho Vital Quencher, a fruit juice made with fermented vinegar — “Aged so well, so you can too.”

“Juice with vinegar?” I ask.

“Yeah!” the Hong Cho guy says as he pours. “It’s really good for the digestive system!”

“Well, you know, it kills some of that bad bacteria you’ve got in there,” he says, patting his stomach.

I intersperse my tastings of wine, olive oil, and chocolate with tastings of bottled waters, of which there are many. I try Elevate, a flavored water fortified with fiber that claims to increase my bone calcium, reduce my risk of obesity and cardiovascular disease, cut my cholesterol, and improve my “overall well-being of the digestive system.” I try a bottled water from Ecuador called Güitig, which comes from melted ice atop a volcano on the Galapagos Islands. Among numerous other benefits, Güitig claims, “When you wash your hair with Güitig it gets cleaned and it gives a mineral glow.”

At a booth for Bali Pure Natural Artesian Water, Bali is referred to as “Island of the Gods” by its New Jersey-based importer.

“So,” says the guy standing next to me. “First there was Fiji water, and now there’s Bali water? All the islands want to get in on the action. Heh heh.”

“Here, try a sample,” says the irritated man at the booth, who may or may not be Balinese.

After gulping his sample, we say “Hmmm,” and nothing more.

“Yes, yes, yes” says the man. “What else is there to say? It’s water. That’s all. It’s the most refreshing and hydrating drink in the world.”

A booth in the Korea section has a juice dispenser filled with a brown, grainy liquid. Roast grain with Yam tea — that is how the brown liquid is translated on the sales sheet. Its description is translated, too:

Enjoy this tea when you slightly hungry in the afternoon of hot summer days.

It is well-being drink for summer. Grains contain lots of vitamins and carbohydrates. So, It’s great for peoples who having indigestion, busy workers, and youth.

As I’m reading the sales sheet next to a college-agd girl, the Korean woman behind the counter asks us: “Would you like to taste?”

We both take a sip of the brown liquid. “Hmmm,” says the girl. “You’d think this would be totally disgusting, but it’s actually not bad.”