If you are an inmate in the Commonwealth of Pennsylvania’s prison system, and you misuse food items, refuse to return uneaten food items, destroy or throw food items, or use food containers to throw human waste, you may be assigned a Behavior Modified Meal the state calls “Food-Loaf.”

The public recently had a chance to experience Pennsylvania’s Food-Loaf at Philadelphia’s Eastern State Penitentiary. The historic site was the world’s first true penitentiary; with the urging of the Philadelphia Society for Alleviating the Miseries of Public Prisons, the state opened the site in 1829. It aimed to inspire true penitence through isolation and silence. Eastern State closed in 1971, but in 2013, it was back to serving meals, if only for two days.

Visitors that weekend could sample foods from three different eras in the history of prison foods. Salted beef and Indian Mash — cornmeal and water topped with molasses — represented the 1830s. In Chow: Food and Drink in Eastern State Penitentiary, prison historian Normal Johnston notes the diet in this early period also included soup, boiled rice, turnips, cabbage, and as many potatoes as an inmate wanted.

The prison’s menu became more varied in the 20th century. Visitors to the event at Eastern State sampled hamburger steak with brown gravy and Harvard beets, which had slices of the root vegetable swimming in a sweet, syrupy sauce. A 1949 menu on displayed revealed much more diverse offerings: fried eggs, grilled stewed peaches, and French toast for breakfast; fried fish, pork chops with applesauce, and orange meringue pie for dinner; and chili con carne, rice tomato soup, and cream rice and raisin pudding for supper.

But the Food-Loaf, representing “prison food today,” was the star that weekend. The unincarcerated public can eat corned beef, polenta, hamburger, and beets at home; few would bother to make Food-Loaf. More commonly known as nutraloaf, it is more a concept than an actual food. Nutraloaf appears in prisons across the nation; recipes differ across states. The idea is to create a food product that fulfills an inmate’s caloric and nutritional needs but does not require utensils. The goal is not to create a food product that tastes good. In fact, prisoners around the country have filed multiple lawsuits claiming nutraloaf violates their eighth amendment protection against cruel and unusual punishment. But fight the nutraloaf and the nutraloaf wins…usually. Earlier this year, the Milwaukee Journal Sentinel reported on an inmate who sued Milwaukee County, claiming that rancid nutraloaf made him violently ill. Food service giant Aramark, who supplied the nutraloaf, settled out of court.

Eastern State gave visitors small portions of the same nutraloaf served in Pennsylvania’s prisons. Cooked white rice, grated raw potatoes, grated carrots, shredded cabbage, dry oatmeal, mashed garbanzo beans, 2% milk, and margarine are mixed together, put into a loaf pan, and baked at 350 degrees for about an hour and a half. As a vegan, I couldn’t taste the Nutraloaf. But I told the tour guide behind the table that, as I vegan, I’ve had a lot of boring veggie burgers, and this just sounded like just another boring veggie burger, but in loaf form.

She agreed. “My mom was really into nutrition,” she said. “It tastes like a lot of things I ate growing up.”

But not entirely. “The difference,” she said, “is the lack of salt.” 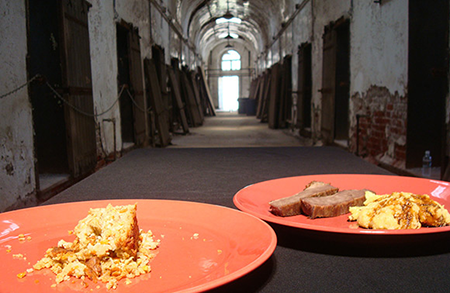 That absence says a lot about nutraloaf: not about its taste, but about its use. On her sparse but informative blog nutraloaf.com, food writer Jenny Smith cuts the nutraloaf into two categories: one grounded in a concern for expedience, and one with punitive aims. The former include recipes with seasonings such as garlic salt; those without fall into the later.

Pennsylvania is careful to avoid the suggestion that it punishes with its seasoning-free Food-Loaf. “Food shall not be used as a disciplinary measure,” according to the commonwealth’s Department of Corrections policy statement on food service (PDF). “However, Behavior Modified Meals (BMMs) may be served to individuals inmates whose current behavior is such that service of hot food or use of standard service wares would present a danger to the inmate or staff.” Serving an inmate Food-Loaf (or its BMM partner, “Bagged Meals”) requires the written approval of the facility manager, who must first consult with the Corrections Health Care Administrator (CHCA). And the prison can serve an inmate Food-Loaf for only 21 consecutive days. If the inmate continues to demonstrate the same behavior that got him (or her, though in Pennsylvania and around the nation, usually him) on Food-Loaf in the first place, a seven-day extension can be granted. If he persists, the CHCA conducts a Mental Health Assessment.

Still, it’s difficult to see how withholding salt is anything but punitive. That simple addition would change nothing about the form and function of Food-Loaf, and everything about its taste. That seemed clear to everyone around me sampling it at Eastern State, and even to the prison itself, which passed out copies of the recipe that described Food-Loaf as “punishment.”

But if nutraloaf acts on inmates, it acts on those beyond the prison walls as well. For the past 10 years, multiple media outlets have conducted nutraloaf taste tests. NPR, Slate, the food critic for Chicago Magazine, and the Onion’s A.V. Club have all weighed in. Nutraloaf here is kitschy cooking. The loaf is a contemporary source for culinary irony in the spirit of Liberace’s Sticky Buns or Joan Crawford’s Charcoal Broiled Steak.

We laugh at nutraloaf, but nutraloaf laughs last. Sure it’s prison food, which is why Aramark doesn’t serve nutraloaf at any of the hospitals, colleges, public schools, stadiums, senior centers, convention centers, museums, zoos, aquariums, or national parks where their other products are distributed. But nutraloaf is subversive: The flavorless loaf elevates the profile of even the most mundane of institutional foods. After flavorless nutraloaf, everything at a hospital, stadium, or convention center tastes better, because it tastes salty and fatty.

Those are our small rewards for not using food containers to throw human waste. But they’re also their own form of imprisonment. That’s the power of the loaf. • 21 June 2013