“The Pre-Raphaelite Legacy: British Art and Design” The Metropolitan Museum of Art, New York.
Through October 26, 2014.

The Pre-Raphaelite Brotherhood was a youthful undertaking. Rossetti was twenty years old. Millais was nineteen. William Holman Hunt was twenty-one. Indeed, the youthfulness of the movement cannot be overemphasized. In his preface to a collection of Pre-Raphaelite writings from the short-lived journal The Germ, William Michael Rossetti (Dante Gabriel’s brother) wrote, “Being little more than lads, these young men were naturally not very deep in either the theory or the practice of art: but they had open eyes and minds, and could discern that some things were good and others bad — that some things they liked, and others they hated.”

That is a good place to start in trying to understand the Pre-Raphaelite Brotherhood. This was a group of talented kids with open eyes and minds who knew what they liked and what they didn’t. They were opinionated and they were brash. They were radicals. It wouldn’t even be wrong to consider them revolutionaries.

The only question is why a bunch of young revolutionaries would want to make art that looks backward. They painted scenes of medieval romance and Christianity. They wrote poems in the same vein. They took up old-fashioned techniques for making art, like stained glass, bookbinding, and tapestry weaving. All of this in 1848. Remember that 1848 was a year when political revolution was sweeping across Europe. Marx and Engels were writing about a specter haunting Europe. But Marx meant the specter of communism, not the specter of Sir Thomas Malory.

The Pre-Raphaelites were mounting a different kind of revolution. It was not political, per se. Its primary enemy was the art academy. It is hard, today, to understand how much power and influence was once wielded by institutions like the Royal Academy of Arts in London or the École des Beaux-Arts in Paris. But in the mid-19th century, these institutions defined what art was supposed to look like, how it was made, who made it, and what got exhibited. Many of the early members of the Pre-Raphaelite Brotherhood were students at the Royal Academy. There, they learned a mild classicism. They learned to copy the old masters. They learned about history paintings. They learned the rules. Like many young men, they did not, in principle, particularly like the rules. Being especially sensitive young men, they noticed that the rules were producing much boring and sterile art. So they asked themselves a simple question: “What’s the art that isn’t boring or sterile?” The answer they came up with is: “all the art that came about before there was an Academy.” That’s to say, the art that came before the establishment of the rules they were learning in school. The art before Raphael.

From this perspective, the backward-looking art of the Pre-Raphaelites makes more sense. There is something fresh and remarkable, after all, in the art of the late Middle Ages and the Early Renaissance. Nor is it clear that the later Renaissance painting of, say, Pietro Perugino — for all its technical mastery — is an improvement over Giotto’s rough and powerful fresco work two hundred years earlier. So, the Pre-Raphaelites were not simply gauzy-eyed nostalgists gazing vaguely backward into time. They were looking for something specific, something you can see in Giotto but you can’t see in Perugino. They wanted to shake off some of their academic learning in order to retrieve a vitality in art they felt had been lost in the accrual of technical skill and formal rule-following. This is not a crazy point. Sometimes you do have to go backward to go forward.

There is an exhibit of Pre-Raphaelite art currently showing at the Metropolitan Museum of Art in New York City (“The Pre-Raphaelite Legacy: British Art and Design”). It is a small show. The showpiece for the exhibit is a large painting by Edward Burne-Jones called The Love Song. It was painted in the late 1860s/early 1870s. The painting is based on a Breton folk ballad and shows a beautiful young woman playing a small organ while a young man in armor listens and an angel dressed in flowing red robes works the bellows of the organ. The painting sounds absurd when you describe it. But it does capture something of the feel and color of an early Renaissance painting.

Henry James once said The Love Song was like “some mellow Giorgione or some richly-glowing Titian.” This is true, though I suspect that Burne-Jones would have much rather been compared to Giorgione than Titian, since Titian’s work contained not a little of the post-Raphael “academicism” that the Pre-Raphaelites were trying so hard to avoid. But let’s not quibble. James’s observation is accurate. There are a lot of “richly-glowing” colors in the painting, just as James says. The more important question is whether The Love Song is the nostalgic, wistful kind of painting that only a kitsch-lover, hopeless romantic, or deep reactionary could really love.

Before we write off the painting completely, let’s be clear about one thing. The painting doesn’t really resemble either a Giorgione or a Titian. Look at the young knight a little more closely. He is lounging on his left arm with his right arm against his calf. There is a great deal of ease in that pose. Figures in early Renaissance paintings just don’t lounge that way. The painterly language of the reclining human figure hadn’t been developed yet. Compare it, for instance, with Titian’s Bacchanal, amongst the loungiest of all his paintings. The lounging in Titian’s painting comes from looking at tons of classical sculptures and friezes. It is a 16th-century lounging, distilled through the lens of the 16th-century idealizations of classical Greek and Roman lounging. And that is not how Burne-Jones’ young knight lounges. Burne-Jones’ painting could only have been made in the 19th century, since the painting presupposed developments in the history of painting from the Renaissance until the mid-19th century. Burne-Jones had that history in his bones. He had learned too much, had looked at too many paintings, had performed too many drawing studies at the Birmingham School of Art. 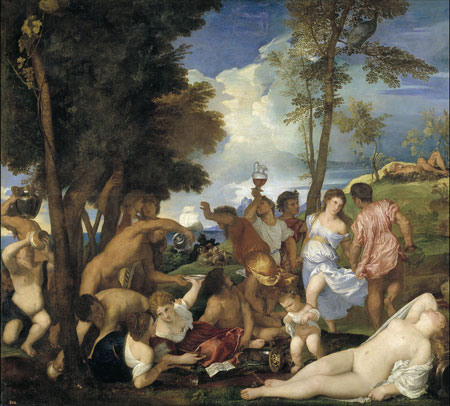 One crucial factor in Burne-Jones’ painting is, thus, technical skill. Such skill does develop over time. Not always in linear fashion. The development should certainly not be considered “progress” in any naïve sense of the term. But the pose Burne-Jones captures was probably beyond the modeling skill of most early Renaissance painters, if not all of them. There is an awkwardness to the poses in Giorgione and Titian. This is part of their charm. But painters like Giorgione and even Titian were still trying to figure out problems of perspective, anatomy, and foreshortening. Burne-Jones had learned all of these techniques in his studies. That is what the Academy is for, after all, to teach young artists all the lessons won in the generations that came before.

Burne-Jones’ painting is, thus, no simple piece of nostalgic kitsch. The painting contains signs of its contemporary nature throughout (contemporary in the 1850s sense of the term). And yet, it is a painting that is trying to reject its own contemporaneity. If this is nostalgia, it is a complex and dynamic form of nostalgia. So complex, I don’t think we should consider it nostalgia at all. Instead, we should look at Burne-Jones’ painting as an act of renewal. “Renewal” is, in fact, closer to the historical meaning of the word “revolution.” As Hannah Arendt argues in her book On Revolution:

The word “revolution” was … certainly characterized neither by newness nor by violence. On the contrary, the word clearly indicates a recurring, cyclical movement; it is the perfect Latin translation of Polybius’ anacyclosis, a term which also originated in astronomy and was used metaphorically in the realm of politics.

That’s how the Pre-Raphaelites could be radical and revolutionary without producing art that looked new. The artists of the late 19th and early 20th century would produce radical “newness.” Some of them would try to create an art that broke ranks with everything in the past. The Pre-Raphaelites weren’t interested in that kind of newness. They were producing an art of radical renewal. The key difference here is in the prefix “re.” The “re” of renewal gestures to something that already exists, a fount or source that can be returned to in the act of renewal. This act of renewal cannot be a simple repetition. That wouldn’t be renewal. It wouldn’t be fresh. The Pre-Raphaelites wanted their art to look fresh. They were obsessed with youth and beauty. Burne-Jones knew that for all his studies of the 15th century, he was a man of the 19th century. He was never interested in creating a painting that looked exactly like something painted in 1438. That would be copying, not art-making.

But the Pre-Raphaelites were convinced that contemporary art could be renewed in the act of dipping into the spirit of the Late Middle Ages and the Early Renaissance. The interesting thing is that this is exactly what happened. Looking at the art of the 15th and 16th centuries, Burne-Jones was finally inspired to create, later in his career, a number of paintings that depict dreamy groups of elongated figures. As Robert Hughes once observed, “Burne-Jones’s strange, gray, airless and Michelangelesque figure compositions … [prepared] the ground for William Morris and the arts-and-crafts movement, for Art Nouveau and thus, to some limited extent, for Modernism itself.”

It would be wrong to conclude that Pre-Raphaelitism was simply a forerunner of the Modernism to come. Pre-Raphaelitism, instead, helps us see that even the Modernism of the early 20th century (and perhaps the post-Modernism of today) is always most interesting when it renews rather than aiming for radical newness. That’s really what Ezra Pound meant with his famous Modernist dictum “make it new,” anyway. After all, Pound took the phrase from an 18th-century BC Chinese anecdote. Just like the Pre-Raphaelites, he was going backward to go forward. • 20 June 2014