You can practically smell the degradation: the scabby bottoms, the missing teeth, the scars, the saggy old breasts. This is post-Soviet Russia — one aspect of it at least. The photographs are by Boris Mikhailov, who has been photographing the people of Russia since it was the Soviet Union. Mikhailov has always been interested in the seedier side of life. He looks into those places where the natural inclination is to look away. He wants his subjects to show us what we least want to see, even if some other part of us is desperately curious.

Mikhailov’s general methodology is to go out onto the streets of Russian and Ukrainian cities and find homeless people, vagrants, prostitutes, drug addicts, and the like. He then gives them some money, sometimes as much as a month’s salary, so that they’ll take their pants down, pull up their skirt, or remove a blouse. Then he takes his picture. The resulting photographs are lurid. The naked persons are beat up (sometimes literally) and broken down. The nakedness is depressing. The condition in which the nakedness is to be found is more depressing still. The whole situation is lousy and I felt lousy just looking at these photographs. The old woman showing us her wretched pudenda is someone’s grandmother, surely. Did I think, for one panicky moment, of my own grandmother in observing that photo?

The sociological commentary inherent to Mikhailov’s photographs is impossible to miss. All the photos in the exhibit “Case History” at MoMA were taken in the industrial city of Kharkov. The explanatory blurb on the MoMA website reads, “Mikhailov’s life-size color photographs document the oppression, devastating poverty, and everyday reality of a disenfranchised community living on the margins of Russia’s new economic regime.” Life in post-Soviet Russia is not, we are being told, going very well for everyone involved. We probably suspected as much already. But here is the documentary evidence. The hell of totalitarian society has been replaced, for many, by the hell of capitalist inequality. The overlaying sociological comment of the exhibit could thus be summed up with the phrase, “Pick your poison.” And there is no question that for these people, the people of Kharkov who have been photographed by Boris Mikhailov, life is poison through and through. 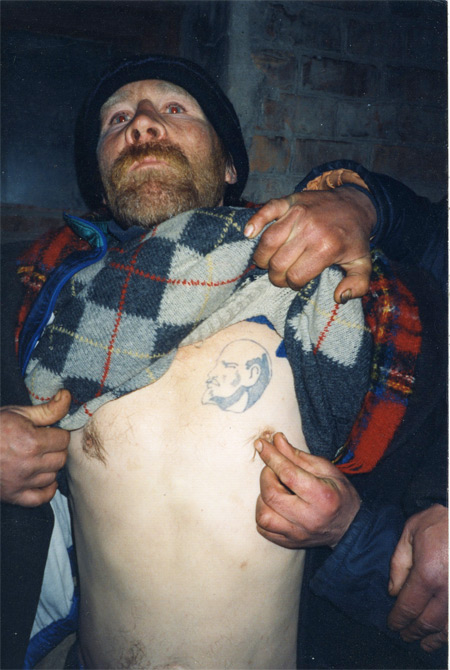 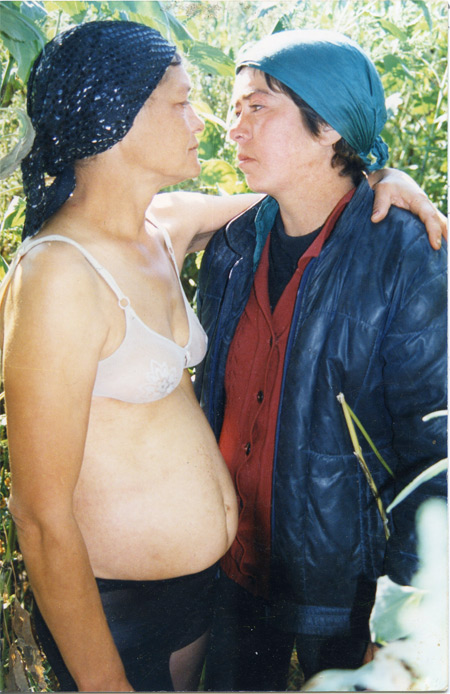 The sociology, powerful as it is, does not do enough to explain why these photographs are successful as art. But comments Mikhailov has made about nakedness and shame give us clues toward understanding the artfulness of these otherwise stark documents of societal breakdown. Mikhailov did not practice photography as a trade in his early adulthood. He was born in Kharkov, in what is now Ukraine but was then part of the Soviet Union. He studied engineering and worked in a factory. He liked to take nude photographs of his wife. He also started taking pictures of his friends in casual situations, capturing aspects of their daily life. He would, at times, capture them in the nude as well. When nude pictures of his wife were found at his job in the Kharkov factory, he was fired. And that is how he became a full-time photographer. As Mikhailov explains it, nudity was a forbidden subject in Soviet days. Controlling nakedness had become a way of controlling people. “Guilt was linked with nakedness,” Mikhailov once said in an interview with Christine Toomey of the Sunday Times. “Since everyone was naked, everyone was guilty. We were made to feel ashamed of our bodies.”

Guilt and shame have always been linked with nakedness. That has been the case since the original Garden, the one at Eden. The only time that humankind could run around naked and unashamed was in the time before sin. But man sins. Adam eats the apple. Eve eats the apple. God comes to the garden looking for Adam and cannot find him. Adam is hiding. God asks Adam why he hides and Adam replies, “I heard thy voice in the garden, and I was afraid, because I was naked; and I hid myself.” Then God knows that Adam has eaten the fruit from the forbidden tree, the Tree of Knowledge. From thence forward, man, unlike the beasts, will know his nakedness and will feel shame.

The biblical story points at something profound experienced by every human being in the move from childhood to adolescence. Perhaps there is a transcendent innocence to the possibility of nakedness. You see glimpses of it in the glorious and unselfconscious nakedness of young children. Suddenly, a toddler will grab at an item of clothing and yank it off with reckless glee. Naked, the child will run around the room, each step a tiny act of defiance against the civilizational rules that are, inevitably, to come. Sooner or later, the kid is going to put on his or her pants and keep them on.

Growing up, as everyone knows, is a loss of innocence. In becoming self-aware, we learn how to be ashamed. In our shame, we learn to have a distance even to our own bodies. Our own naked bodies take on an aspect of foreignness. We put a layer of clothing between our nakedness and the world, and in so doing mark the distinction between our inner selves and our outer selves, between awareness of the outside world and awareness of the fact that we are aware. Once that shift has been made, the fact of being naked can never be comfortable again in the way it is comfortable to a child. Naked adults avert their eyes by instinct, turn their heads down, blush.

But not the people in Mikhailov’s photographs. They meet the eye of the camera in a dead-on gaze most of the time. They pull down their pants and they stare with a lack of recognition that anything special is going on. This is more disturbing than would be an outward show of emotion. The poses of a typical pornography shoot would, in fact, be more comforting than the casual, uncaring nakedness of Mikhailov’s subjects. Pornography poses, even at their most aggressively sexual, are stylized and ritualized in a way that gives proper respect to the condition of nakedness and exposition. Pornography is aware of the underlying shame, and is working overtime in order to subvert it, transcend it, challenge it. The deep way that nakedness is related to our capacity for self-consciousness is being given its due. Nakedness is a big deal; it is something special. But the way that Mikhailov’s photographic subjects are caught in the act of pulling down their pants or lifting up a shirt erases the specialness. These people have nothing left to protect, least of all their shame. In this, they have lost contact with their essential humanity, with the knowledge of what it means to be human beings, which is the ambiguous gift — though gift nonetheless — of the Tree of Knowledge. 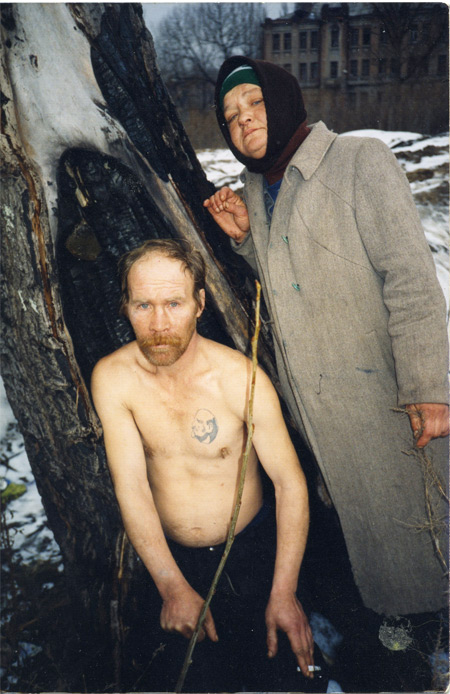 The subjects of Mikhailov’s photos have been ejected through the back door of civilization, back out into the Edenic paradise where you can take your pants off anytime you like. And yet, no paradise is to be found there. The cost is too high. These people have not been restored to a time before shame, but reduced to a condition of shamelessness. Something has been taken away, some root capacity to participate in human things has been stripped from them and nothing has been given back to fill up the empty space. They show us their naked bodies as would zombies, without the proper recognition of what it means. They have nothing to treasure, nothing to hide, nothing that could be a secret anymore. It is as if they have eaten from a second tree, off to the side of the Tree of Knowledge in the Garden of Eden. This is the Tree of Oblivion. And it too gives off fruit, a fruit that can be eaten by man. 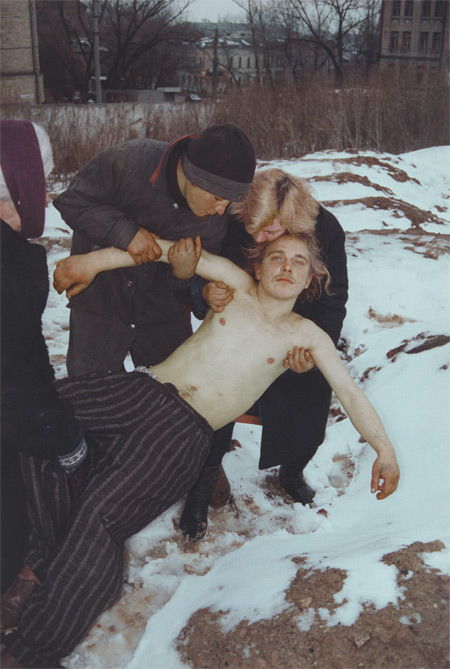