In a postscript to her short but engaging study of the painter George Bellows, Joyce Carol Oates offers an image of his death that mixes gothic tragedy with inspiration. Bellows died from a ruptured appendix in 1925 at the age of 42, ending a two-decades long career filled with success and artistic energy. “Why did George Bellows die? — so needlessly, and prematurely?” Oates asks. I find the rhetorical structure curious in how it suggests a different, more metaphysical question: Why do artists die? Oates concludes with a haunting narrative of his last months:

From August 1924 to January 1925 . . . he had known that his appendix was dangerously inflamed and might rupture at any time; yet he’d resisted medical treatment, made light of the severe pain with which he lived—for what tragic reasons of stoicism, death-denial, sheer masculine stubbornness one can only guess . . . He continued to work as usual at his art, no doubt imagining . . . that he might, through sheer inspiration and genius, paint his way out of a merely physical predicament. Bellows was tearing up rotted boards from his studio floor when his appendix finally burst. He died in a New York hospital following emergency surgery a few days later.

This image of Bellows ripping up his studio floor just as his body was giving way has it own clawing sense of intrigue and sadness. Oates finds in Bellows last days art’s ability to transform physical pain into something aesthetically vital. But it is the energy here that most compelled her, the efforts of ripping up a floor coupled with painting a canvas. “Bellows was a man in the grip of a compulsion to ceaselessly reimagine and reinvent himself,” writes Oates. Oates, who exhibits her own compulsive energy in her writing, admires Bellows range of subjects as well. He did not limit himself to a particular genre or style, composing illustrated lithographs for magazines, and experimenting with different techniques of oil painting creating portraits and landscapes and street scenes, and of course those famous paintings of murky and illegal boxing matches that have become so iconic.

The Royal Academy’s retrospective, a paired down version from an earlier exhibition that traveled from New York’s Metropolitan Museum to Washington’s National Gallery and ending in London this summer, makes clear that Bellows’ reinventions confound us in their uncertainties, undermining any easy definition of his work.

The show rambles along in a simple timeline starting from early portraits and landscapes in New York and his seascapes done in Maine, to his lithographs for popular and political magazines, to his later portraits. Some of the most captivating canvases in this show come right at the beginning in a series of portraits of New York’s working poor. “Little Girl in White (Queenie Burnett)” (1907) gives us a large dark canvas of a small figure wearing a white dress thick and heavy under Bellows’ paintbrush, her body nearly weighted down amidst the dark brown background. She stares out at us with a cautious dignity. Her duties were not to be the subject of a painting but rather to clean homes. Bellows gives this little girl and other similar subjects a powerful presence, turning the working class into a subject of refined portraiture in the tradition of Diego Velazquez or Frans Hals or Edouard Manet. That is the thing about Bellows, his works can often feel like an aesthetic Rorschach test: look deeply into the canvas and tell us the first artist that comes to mind?

Arriving in New York in 1904 from a comfortable middle-class family in Ohio, Bellows was searching for a life in sports, basketball precisely, rather than art. But in New York he enrolled in the New York School of Art and there took courses with Robert Henri, the artist and educator whose influence over 20th century American painting has yet to be fully explored. It was Henri who impressed on his students to look to the everyday, the streets and domestic spaces for subjects for their canvases. Drawing on his own studies and travels in Europe in the late 19th century, Henri eschewed the traditions of academic painting, encouraging his students to redefine not only the subject of art but also the methods of painting. He came to despise Impressionism as all surfaces, and instead instructed his students to capture the textured reality of a scene, to use paint like mud, as he often declared. His ideas about painting were of the era of Upton Sinclair’s dark realities of Chicago meatpacking in The Jungle, and Lewis Hine’s darkly composed factory floors of wearied workers and hard-shelled child laborers. Henri imagined that oil paint on canvas could attain a similar kind of reality, and could offer another way to witness the realities of industrialization. His ideas and the canvases they produced were called the Ashcan School, now a relic of art history. But Henri’s vision and the artists he influenced (including such notables as Rockwell Kent, Stuart Davies, Joseph Stella, and Edward Hopper) was another thread of American modernism that often gets overlooked. 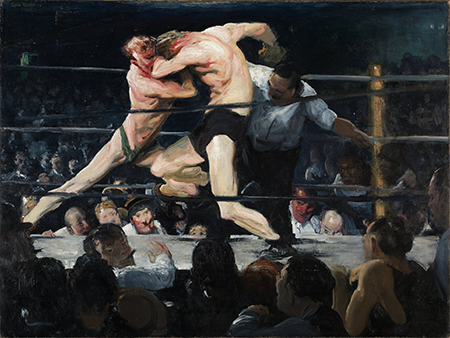 It was perhaps Bellows in the early years of his career that best exemplified Henri’s ideas. And no less so than in his well-known scenes of boxing matches. “Stag at Sharkey’s” (1909) captures an energy and force that leaves you stunned, and shows what Bellows was best at: the body in motion. The two boxers are nothing more than thickly layered paint, their skin glossy with the sheen of the oil paint, conjuring the sweat that you know was dripping off the men’s bodies. The lighting turns the men’s encounter into its own isolated moment. We don’t really care that the bodies are distorted — the boxer on the right couldn’t possibly find his balance in that position, and the other seems wholly disproportioned. In these scenes of illegal boxing matches (the sport was outlawed in New York, and operated under the law in private “members only” clubs) we are not looking for realism in the way Hine’s photographs reveal the life of the factory. But like Hines workers who he often portrayed as blending with the machines they were tailored to, Bellows gives us a scene richly imagined as our own witnessing. Notice the spectator in the bottom left, his head turned back towards us, meeting our gaze, drawing us into the moment and making us aware of ourselves as part of the spectators. 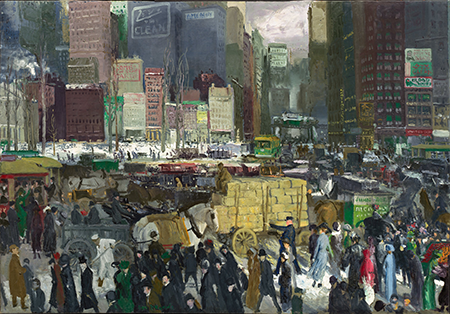 Bellows brings us into the painting again in his scenes along the docks of the Hudson River, standing us alongside the men and horses, the paint smeared and layered to convey the roughness of the moment. But this intimacy is lost in his series of excavation for the Pennsylvania Railroad Station in New York City, or the more dramatic painting “New York” (1911) that captures the crowded chaos and utter synchronicity of Times Square amid a morning rush. There is something lacking in such painting so expansive and panoramic, looking like a stage setting for an opera. I wished for the closeness of those earlier portraits, or the singular jab of one boxer for another. But these scenes are what consumed him for a good part of his life, and more acutely so after the Armory Show of 1913 when New York was introduced to European modernism, post-Impressionism and Cubism. Henri was a big supporter of the show, and Bellows exhibited three works along with helping to install the exhibition, hauling works by the post-Impressionist and cubist through the exhibition hall, each work giving him a close-up view of the paint on the canvas. This experience only fueled his distain for cubism and its siblings.

The Armory Show did little to inspire Bellows, and instead seemed to have moved him even further back into the roots of Impressionism. His works after 1913 are often deeply concerned with color, whether in his landscapes of middle-class New Yorkers in the park in winter, or his series of seascapes that capture the energy and light along the Maine coast. In these works you see clearly the influence of Seurat and Monet, the abstractions of the landscape succumbing to the pleasures of light and brushstrokes. It would be this interest in color, and a move to more staged and controlled scenes in the 1920s that prefigure the regionalism of artists such as Grant Wood and Thomas Hart Benton in the 1930s, or even Bellows fellow student Edward Hopper, whose explorations into the psychology of color was something that both men must have learned from Henri. There are a few seascape scenes of lonely houses sitting along the coast that hauntingly recalled images of Hopper’s later works. Bellows has this way of slipping away from us quicker than we can judge. His canvases, collected in this way, feel a bit caught in the past and the future all at once.

And this has been his fate over the years. As the Ashcan School faded into art history, eclipsed by more powerful movements of surrealism and abstraction, so did Bellows fade with it. His canvases can be thrillingly engaging, particularly in the earlier works, with their direct subject matter. But his later canvases often feel too composed, the portraits too stiff, the landscapes too orchestrated. The best of his paintings reminds us how complex his art can be, how interlaced its concerns were with modernism’s experiments with technique. Those nearly abstract seascapes of light and color were attractive to the mid-century art critic Clement Greenberg, who in 1949, praised Bellows for reasons that had nothing to do with his boxing matches or portraits of the working poor. Greenberg writes:

George Bellows is one of the most important artists America has produced in this century… like Manet, Bellows modeled his forms broadly, in varying shades of local color, not in gradual grays or blacks. This style was a continuation, essentially, of Manet’s phrase of impressionism, but… Bellows… extracted something sufficiently new from it.

Greenberg found in Bellows an artist whose explorations in color and paint drew on Manet’s early works and prefigured the experiments of abstract expressionists that he so valued. In reading the wall texts, you encounter many Bellows in this show, his canvases floating somewhere between 1880s Paris and 1950s New York. (In an unplanned coincidence, this show overlapped for a few weeks with the large Manet exhibition just one floor below.) Much of this show echoes Greenberg’s praise, asking us to ponder the artist’s use of paint to capture the burst of a crashing wave or the rise of a snow bank. But the best of his canvases show us that there was another vital thread in the history of modern art, one composed of bodies in motion and excavated cityscapes, of dockworkers and river barges, of boxing matches and tenements dwellers. The artist used the techniques of modernism to create spectacles of modernism’s margins. 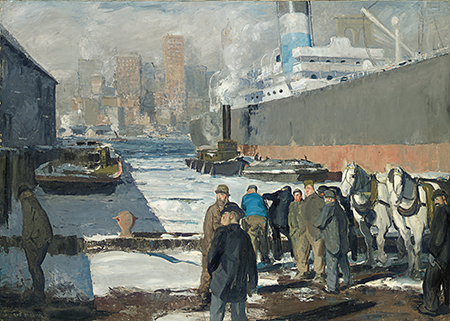 What Bellows might have accomplished if he attended to the pain of his abdomen — if the artist hadn’t died — is unclear. It is hard not to think of his work and life as unfinished. And perhaps it is this unfinished quality that turns the artist into a medium of interpretive efforts, channeling the past and prefiguring the future, stuck in an uncertain stasis. Like the floor of his studio he never completed on that cold January day in 1925, Bellows art remains caught in a constant process of becoming.