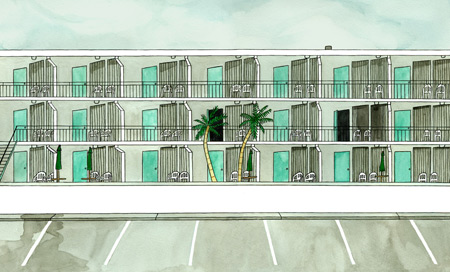 At the end of the film Venus, the character played by 74-year-old Peter O’Toole is taken by a young friend to a British seaside resort in winter, where he dies. If any viewer didn’t know that this was a sad turn of events, he was cued by the fact that it occurred in a happy place (the beach!) at an unhappy time (the lonely off-season).

There’s an undeniable melancholia (albeit a lazy and ham-handed one) to the down months of hyper-seasonal places like summer camps, amusement parks, and beach resorts in colder climates. Feelings of emptiness there are heightened by their immense sizes — built to accommodate hundreds or thousands, in winter they stand barren.

Wildwood, New Jersey, is such a place. A resort town that lies on that stretch of the Jersey Shore between the casinos of gritty Atlantic City and the Victoriana of tony Cape May, the barrier island grew as a vacation spots for working-class families of Philadelphia. In the ’50s and ’60s, more than 100 motels with names like the Royal Hawaiian, the Pink Orchid, the Singapore, and the Waikiki sprung up, nods to the more desirable but unaffordable destinations in the Caribbean and Pacific. The National Marbles Hall of Fame is in Wildwood, and the annual National Marbles Tournament is held there every year. It’s one of the last places in the country with Fascination, a Bingo-like game that became popular in the middle in the last century.

When summer ends in Wildwood, the island’s population of about 250,000 shrinks to around 5,000. And with the tourists go the businesses — fudge shop windows are covered with plywood and gates are pulled across arcades. The leaves of plastic palm trees are removed. Miniature golf course ponds are drained of their disconcertingly blue water. Traffic lights are turned to blinking mode.

Wildwood in winter is the kind of place that would appeal to the Romantics — the closed Strand theatre with its marquee of Labor Day films New Jersey’s own Tintern Abbey. At one time a haunted house called Dracula’s Castle covered an entire pier, but then some kids broke in, played around with fire, and set the whole thing ablaze. Poetically, the Castle burned to the ground in the middle of January, at the peak of Wildwood’s desolation.

But though winter and summer on the island are distinct, that period between melancholy and magic thrusts no clear emotion on the visitor, and this is a problem. I recently went to Wildwood on an April day, and found that not only was I unsure what I should be feeling, but that spring presented the kind of reality one goes to places like Wildwood to escape.

Most of the businesses along Wildwood’s two-mile boardwalk were still closed, and won’t open until sometime in May. But there was activity at a lot of them that day. People were painting and power-sawing things. Every summer the games offer just a few types of prizes; I saw a woman throwing bags of this year’s — black and pink pillows with the Playboy bunny logo, and stuffed versions of a character from the Family Guy cartoon — behind the counter of a water gun stand. Two guys were bolting a sign to a post in front of a hot-air-balloon children’s ride that listed its price in tickets (four). I watched a teenager screw light bulbs into the flashing sign of a pizza stand, and a man wash the dust off a neon sign that read GYROS with a paintbrush dipped in soapy water.

This was a strange time to be in Wildwood — work at the beach didn’t seem as glamorous as it does in the warmer months, when everyone’s tan and lifeguarding or leading whale-watching tours. It actually looked like the kind of work that goes on year-round in just about every other place.

Maybe this time should be hopeful, a promise of summer. But the in-betweenness of the moment is too weird for that. In Wildwood in April it’s cold enough to wear long pants and long sleeves, but just warm enough to make you sweat as you try to walk through the sand. In April it’s possible to get a henna tattoo, but not a handwriting analysis. A T-shirt that says, “Please tell your boobs to stop staring at my eyes,” but not a hermit crab.

As if the boardwalk weren’t disillusioning enough, I was in Wildwood during the Cape May County Chamber of Commerce’s Business at the Beach Expo. This was held at the Wildwoods Convention Center, which is the kind of small-town convention center that hosts regional cheerleading competitions and low-rent wrestling matches.

Because of its name, I thought the Business at the Beach Expo would collect in one place all the kinds of businesses I associated with the beach. Cover band bookers. Ferris Wheel designers. Firework vendors.

But this was not the case. The expo was actually filled with exterminators, and banks, and insurance agencies, and carpet installers. It was filled, basically, with the kinds of businesses that exist in every town, but in Wildwood are usually overshadowed by long lines for curly fries and skeeball tournaments. I had come hoping to get a glimpse of the innerworkings of a resort town, which I imagined to be fanciful and carefree; what I got was the realization that even amusement parks have rat problems, that even salt water taffy stands sometimes need to refinance the mortgage.

As a service to its members, the chamber of commerce brought in Dick Sheeran to lead a talk entitled “Minding Your Media Business.” Sheeran was for many years a reporter at a Philadelphia television station, and was at the convention center to provide an “insider’s perspective” on the media.

The tips Sheeran shared in his 45 minutes included how to write a news release. (It should be short and crisp, “like kettle-cooked chips.”) To not be discouraged if you don’t get a response to your news release — because sometimes there are more important things going on — but to be persistent. (“There is what we call the ‘slow news day.’”) To consider visuals if you’re hoping for TV coverage. (“The first thing a reporter asks when he’s assigned a story is ‘What’s the vid?’ That means video.”) And to be open to exploring “e-media,” including podcasts and blogs. (“If you have a Web site, you can have a blog. What’s a blog? It’s a web log.”)

At the end of his talk, Sheeran opened the room to questions. A woman with a non-profit cancer organization asked how to attract attention for the pool party it’s planning as a fifth anniversary celebration.

The woman didn’t know. “The last time I covered a pool story in Atlantic City,” Sheeran said, “it was a guy who brought over the Swedish bikini team.”

The woman said that they were thinking of having someone in a mermaid costume at the party. Sheeran told her that she should include a picture of the mermaid in a news release.

Another woman, who works with a dance company, was angry that the Press of Atlantic City wouldn’t give the company as much coverage as it did the guy “with tattoos, piercings, and all those obscene things about women,” and she wanted to know why. I was thinking that a story about a guy with tattoos and piercings sounded more like the kind of story I’d want to read at the beach, but this woman thought that the Press needed “to stop acting like it’s Rolling Stone.” Sheeran, who doesn’t work for the paper, told her she needs a gimmick, but had to stop there. He was over his time, and the expo and cash bar were about to open.

After Business at the Beach I walked the length of the boardwalk. When I got to the end, I saw excavators tearing down the empty buildings on a pier called Seaport Village.

At one time the buildings of Seaport Village were filled with a tattoo parlor, a restaurant, and a number of places that sold T-shirts, windsocks, and wind chimes. It was built to resemble an old-time fishing pier, cedar shingles and nautical decorations bringing a bit of New England to New Jersey.

There was also at one time a store in Seaport Village called the Candy Barrel. It was filled with tubs of loose candy and run by an old man. A friend and I went to the Candy Barrel every time we were in Wildwood, and we liked the old man. One time we asked him how he got into the candy business. He told us that he had actually bought the business for his son, but eventually his son didn’t want it any more, so the old man took it over.

At that age, it seemed to be simply a case of severe ingratitude. Looking back as an adult, I think that the situation was likely a little more complicated, that the old man’s actions felt like the kind of intervention a parent makes when their child’s going through some kind of trouble. Alcohol? Drugs? Unexpected baby? Simple aimlessness? Unfortunately, the kinds of problems that would compel a parent to buy a candy business for their child would probably be the same kinds of problems that couldn’t be solved by owning and running a candy business, and that’s why we always saw the old man and not his son.

Seaport Village fell on hard times and had been empty for the past few years. The plan now is to turn it into a 90,000 square foot, pirate-themed indoor water park. Had I been there in winter, the empty buildings would have contributed to the winter malaise; had I come in summer, I would have been excited to see that construction began on a pirate-themed indoor water park. But I stood there on an April day, watching the excavators tear apart the walls of a store that once sold boogie boards. Two 70-something women in scooters pulled up next to me to watch, too, and I wondered what happened to the old man, and whether the son ever got his act together. • 25 April 2008