The animal portraits in More Than Human are strange. By strange I don’t mean weird — though they are as weird as they are exquisite. I mean something more like uncanny: both familiar and alien. Tim Flach photographs monkeys, jellyfish, bats, pandas, tigers, sea horses, axolotls, frogs, insects, chickens. The animals are posed and juxtaposed in Flach’s studio, perfectly lit and devoid of environment, like pastries under glass in a bakery after hours, sprayed with a sheen that makes them inedible. A green flower beetle displays its sculpted armor in all its shiny magnificence, legs splayed. A panda bear sits face-front with arms folded, like he is posing for a passport. The same panda is shot from behind, unmoving; the clean, brushed white fur on the back of his head is more a coat the panda is wearing rather than part of its own body.

Flach has extracted extraordinary, close-up detail from his subjects. With digital enhancement and a camera that is almost a microscope, Flach is able to expose aspects of animals we wouldn’t see even if they were held up to our noses. The prickly ridges on the frozen tongue of a panther. The individual lines and prints on the palm of a gorilla. The toe-hairs of a cockroach. The expression of a seahorse. The translucent skin of a horse embryo. The closeness borders on the infinitesimal. You are seeing the unseeable. 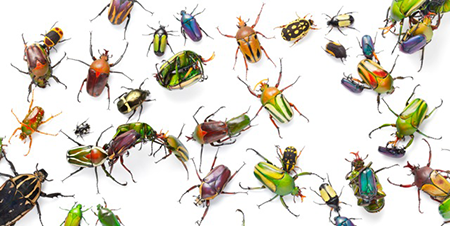 Flach calls his photographs portraits, and yet they often lack faces. In a portrait of a sphinx cat, the head is just outside the frame, leaving the viewer to contemplate the skin folds on an anonymous, hairless, pink body. On page 248 is a rusty keyhole dropped onto a pile of white and orange stones that is actually the eye of a gecko. Stretched across two pages at the beginning of the book is a grey swathe of skin and fur. Brown cracks run along folds in the skin. What animal does this skin belongs to? An elephant? A monkey? You aren’t even sure what part of the animal it is. An ear? An arm? Never mind not seeing the forest for the trees. In this animal portrait of flesh and fur, you cannot even see the trees for the bark. 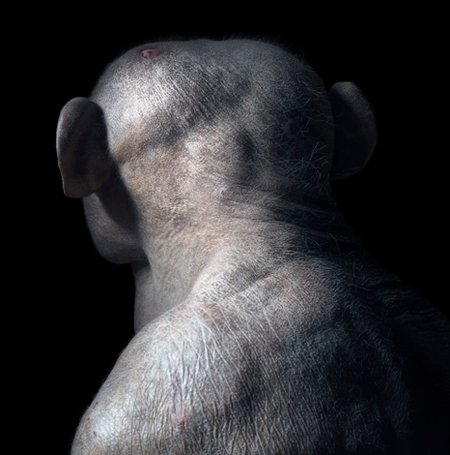 Flach writes that his aim with these photographs is to bring the viewer “into an unnatural proximity to the subject and [allow] them to engage with it, creating an unreality that in turn brings the viewer closer to reality.” Flach’s photography holds out the promise that the animals will reveal more to us the nearer we get to them. But the closeness of the photographs often brings us to a wall rather than a door. On page 176, an armadillo is rolled up into a ball of its own shell. The detail on the shell’s surface is a bit like flowered wallpaper. The animal is all surface. You cannot see the armadillo’s face, or its legs, or anything identifying it as animal. It may be a rock for all we know. We are told there’s an animal in this portrait yet it’s nearly impossible to find. The armadillo is an impenetrable fortress. Its closeness — as in all Flach’s photos — draws you in like a black hole and leaves you floating in space. Is the armadillo showing us that when we get too close to animals there is nothing to see?

The year before last I became interested in birds. This is how I came to take pictures of them. It seemed the logical next step. To trap wild birds in my camera I had to accustom myself to their rhythms, move how they moved, discover what they liked and where they liked to perch and at what times of the day. (City life had tricked me into believing that birds were out all the time, and everywhere, and enjoyed everything equally, just like New Yorkers.) I learned how to hold my breath and be patient. I learned birdsong. I kept my camera near the fig tree and soon enough I had a flock of birds inside it.

Later, I went through my photographs and edited. I deleted the blurry ones — in other words, most of them — and saved the few that were closest and clearest. I was pleased with the pictures. The birds were pretty and motionless — I could take my time and look at parts of the birds that were too hard to pick out in real life. I could see their feathers, zoom in on their eyes. Sometimes my camera captured an unknown bird in flight that I could identify later in my bird guide. In life, the birds were moving all over the place, doing manic bird things. In their constant motion, the birds were indifferent to my watching. But in my photographs, the birds were looking at me.

I have a collection of old photographs too, discarded snapshots of people and places. Among them is a black-and-white photograph of a field. The field is nice enough. It’s hard to say where it is. It looks as though it might be summertime. Above the field, far in the distance, are a handful of smudges against the sky. The smudges are faint, hardly there, glad to be ignored. The smudges are birds. The appearance of birds like this, in an amateur photograph prior to the digital age, was usually due to luck or accident. When you look for birds in old amateur pictures, they are rarely the subjects. The available technology simply kept most people at a distance from animals unless they were at a zoo or on a farm. 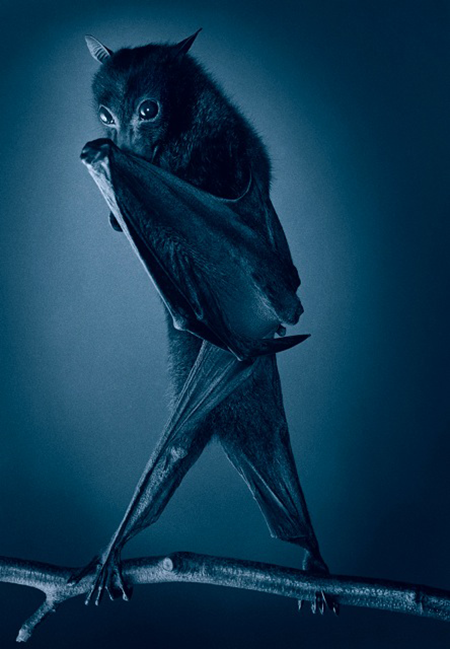 When I look at this photograph, the bird smudges are little more than impressionistic smears, barely resembling animals. There is no presumption that the birds are seeing the photographer. They are messy, active, autonomous. Because of that autonomy, the smudgy birds seem more “real” than either my own bird photographs or Flach’s animals, even though they are farther away. Because they are farther away. For that is how birds are in real life: distant. For most of human history, there has been a limit to how close we could get to wild animals. We have seen them and known them mostly from afar. At some point, seeing an animal race behind a rock or dip behind a cloud became unsatisfying. We longed to get nearer. The longing to get close to nature might be as old as people; it is definitely as old as art. Over the years, we have brought animals closer and closer. We hold them to us, pet them, protect them, consume them, worship them, destroy them, paint them. We thought that the closer we got the more we would see. As we got closer, we inevitably pulled them from their world into our own. At that very point, the closeness becomes an impediment to real seeing.

A little less than a hundred years ago, in Estonia, the biologist Jakob von Uexküll was playing with ticks. Uexküll was interested in how ticks perceive their environment — indeed, how all organisms do so. He decided that, though ticks may share a specific environment with many different organisms — deer, humans, birds — they perceive that environment in their own special way. He called this subjective universe of animals Umwelt. Our arms, for example, are part of our bodies; we consider them part of our subjective experience. But when a tick finds our arm, the arm becomes part of its environment. The blind and deaf tick knows the arm by a heightened sensitivity to smell and also to light in our skin. The blood that flows from our body to the tick’s is, for us, an imperceptible amount. We would lose more with a scratch. For the tick, however, our blood is its life force. Without us, the host, the tick will not reach its next level of development and will die.

We can look at ticks, study them, dissect them even, but we can never access its Umwelt, any more than the tick can perceive ours. There is an elusive boundary between person and tick that can never be breached, no matter how close we are to each other. When we recognize this gap, we find ourselves instantly at a level of removal from the tick. Nonetheless, this boundary doesn’t have to be an abyss. The distance allows us to consider that the tick has its own perspective. As Uexküll puts it, to recognize that the tick has subjectivity, we don’t need to know what the butyric acid on our arm tastes like to the tick, we only need to register that butyric acid is a perception mark for it.

Lewis Blackwell, in his commentary for More Than Human, notes that the animals in Flach’s portraits have been removed from their natural environment and placed in a photographer’s studio. In fact they are removed from any environment — most of the animals stand inside a black or white void. It’s almost as if Flach is trying to create a portrait of the Umwelt-less animal. In each portrait, Flach erases distance to bring us closer, attempting to cross the Umwelt boundary. 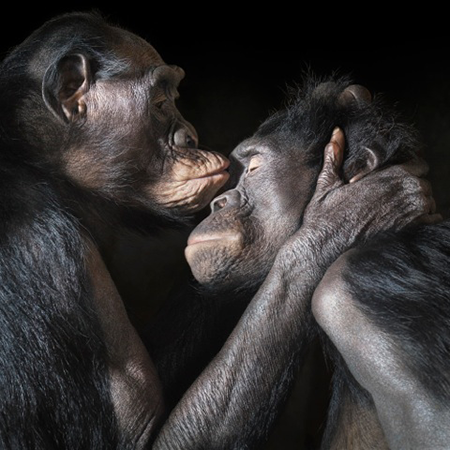 But each push further in creates a bigger and bigger gap. By denying the animals their own world, we lose the ability to see them for what they are. The distance lets us see the animal more closely. To really see the tick we need only to step away from it. Even if it’s right on our arm.

To appreciate an Impressionist painting, Ernst Gombrich once wrote, one had to step back. Stand too close and the painting was just a bunch of dots. But step back and a miracle of seeing would happen. All the pieces that were so puzzling up close would suddenly fall into place and come to life before our eyes. 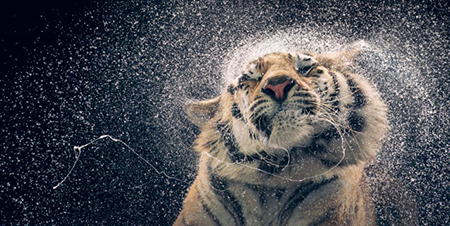 More Than Human is like a meditation on the distance of closeness. It is an inversion of Gombrich’s stepping back, revealing what happens when you ignore the distance that makes it easier to see. Perhaps the animal’s Umwelt is an Impressionist painting, a reminder that seeing animals closer doesn’t necessarily mean seeing them better. More Than Human shows us how essential distance is to seeing.

With technology, we can look at other animals more closely than our eyes can manage on their own. This is our inheritance, the way we perceive our own Umwelt. But it is also our inheritance to see in metaphors, to observe from afar, to look at other creatures without needing anything from them. In stepping away, or stepping aside and half-shutting our eyes, we can still see the animals, outside the labyrinth of mirrors that always leads us back to ourselves. There is a particular reality that can only be found in a metaphor. Stepping back might not let us see the bird’s eyelashes, but we can look at the smudges over the field and see the birds as they are. • 10 April 2013