For both believers and nonbelievers, the pageantry of religion can sometimes feel like a whole lot of extraneous fuss. The stained glass, the snakes, the evocation of languages long dead — up, down, up, down, up again, down again. Shouldn’t you just be able to close your eyes and stand alone on a mountaintop wearing a simple shift to commune with the spirits? Even that, though, is a kind of ritual. The externalization of faith, whatever form it takes, is unavoidable. But it is also meaningful to and necessary for religion. All religions share a common attempt to communicate something that is, by all accounts, inexpressible: belief. Religion itself isn’t belief but razzamattazz, and all the glorious rituals and songs and handicrafts are in the service of communication, and thus, community. Years ago, during my youthful days in theater school, a teacher summed up this process quite nicely. “But Stefany,” she exhaled, “no one cares what you are feeling. An audience only knows what you are feeling through what you are doing.”

As religious expressions go, I’ve always been particularly attracted to the river baptism though, like most, I’ve only seen them performed in movies and television (and now the internet). River baptisms are inextricably associated with the American South, and with the first few decades of the 20th century, when many of the rituals that made the South alternately special or wretched were in their waning days. On display now in a single room at the International Center of Photography (ICP) in New York City is a wonderful exhibit of picture postcards documenting the practice in the South and Midwest between the late 19th and early 20th centuries called “Take Me to the Water: Photographs of River Baptisms.”

The pictures show how the ritual was done. The community of faithful would gather together along a river’s banks, often in their Sunday best, sometimes in white, sometimes as is. The pastor would find a place in the river where he could stand about waist high. Some days, only one member of the community was being baptized while other days featured multiple baptisms. The initiate, the person being baptized, also stands waist high, away from the safety of the riverbank, waiting to be dunked. Notably, this person is an adult or child but never a baby. They are always fully clothed. The ICP photographs show the initiates in a variety of pre- and post-submersion poses. Head down, eyes closed, praying while the pastor lays a gentle hand on her back. Head down, hands in pockets while the pastor raises one robed arm high above his head, mouth wide open in recitation. Pastor’s hand on the waist, over the mouth and nose, supporting the neck. Falling backwards, going under, emerging from the water with arms reaching out to the crowd.

The public nature of the river baptism is what sets it apart from so many other religious rituals (especially in America, a country of believers with, paradoxically, few shared rituals). A river baptism doesn’t have to be in a river; it can be in a creek, the sea, an old bathtub in the yard. One “Take Me to the Water” photograph shows a 1920 baptism being performed in a square, above-ground, wooden swimming pool that is part stage and stands in the middle of a barren Kansas prairie. 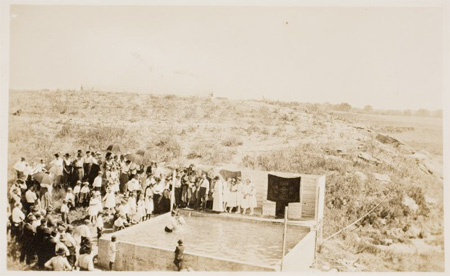 The river baptism doesn’t need a river but it does need an audience. Baptism itself doesn’t make you a believer, nor does it make you holy. It is a public testimony of faith, a covenantal act. The ritual of immersion baptism mirrors the death, burial, and resurrection of Christ by giving the initiate a spiritual death, burial/resurrection, and renewal. These three stages follow what anthropologist Arnold Van Gennep, in The Rites of Passage, classified as “separation,” “transition,” and “incorporation.” In the first stage, separation, the initiate is singled out from the community and led into the river. In the second stage, transition, the initiate is “buried” in the river along with her old life, and then “resurrected” as she is pulled from the watery grave. Finally, the initiate is brought officially into the community of worshippers, incorporated into her new life. Even though the baptism is performed individually, the ritual is one of communal bonding. With each baptism, the group of faithful also is reborn, refreshed.

The river baptism’s audience isn’t just made up of believers. Because they are meant to take place in ordinary, open settings, the rituals would often be joined by the curious, passersby, or, as we now know, a photographer. As the photos at ICP show, the witnesses to the baptisms are as much a part of the story as those being baptized. One photograph — from Wauneta, Nebraska, 1908 — is from the vantage of a man and a young girl in a canoe, who look as if they just happened upon a baptism that is being performed off in the distance. In another, labeled “Johnson Photo” and dated from between 1907 to 1918, a woman waiting to be baptized in the water is barely visible through the surrounding, blurry crush of onlookers. Front and center stands a young boy on the riverbank who looks not at the baptism but the camera, as if to remind you that the baptism is about him, too. 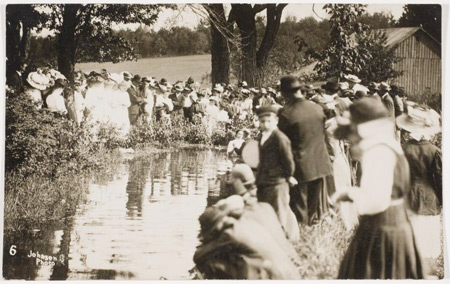 “Take Me to the Water” reminds us that, just as the camera allows us to share moments of intimacy it simultaneously distances us from them. What’s notable about these pictures is that most were printed as postcards, to be casually passed around to family and friends. So, the baptisms that were so unabashedly public were made doubly public as they were photographed. Remarkable, too, are the glimpses you get of the postcards’ owners, who were sometimes tourists from the North, fascinated by the exotic customs of their Southern neighbors. “Here is the richest that ever happened you just ought to see one,” is scrawled on one postcard that made its way from Alabama to Illinois. “Mother, how do you like the looks of this? Looks pretty icy don’t it?” is written on a postcard showing a winter river baptism that indeed looks icy. 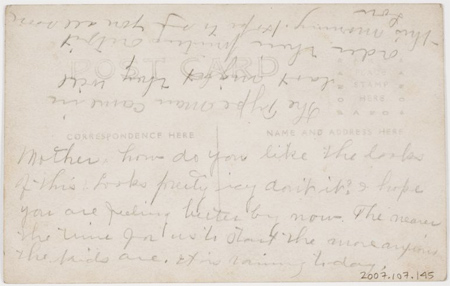 The participants in these river baptisms must have known they were being photographed. They may have even known that the people taking pictures might disseminate them at a later date, might laugh at the believers and their funny little religious practices. But by being public about their faith, the message sent by the community of believers is clear: respect us or don’t, but know that we know that you see us. It’s a pretty formidable switcheroo, and adds another undeniable quality to the river baptism: defiance.

Nothing sends this message of defiance more than the collection of “Genuine Negro Baptism” postcards that were usually purchased by curious whites. Take one postcard, for example, advertising “A Typical Negro Baptizing.” It shows a group of suited men standing in a river holding hands around what seems to be a child. A group of 50 or 60 people watches from the bank —women in white dresses, men in hats, some with heads cocked, some with hands on hips, some trying to shield themselves from what looks to be a very sunny day. All attention is on the water. It’s not an especially spectacular photo, but it has a solemnity to it. On the flipside of the postcard is written, “You would think they would at least change to bathing suits, wouldn’t you?” This commentary is sad and feeble, but not only because of its obvious xenophobia. The words lack the qualities that make the image profound — purpose, daring, belief. 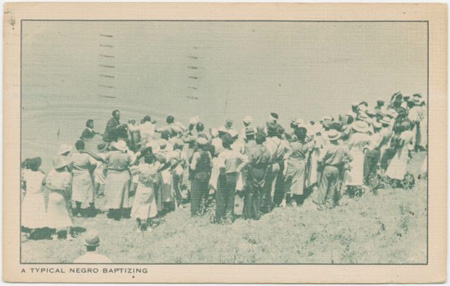 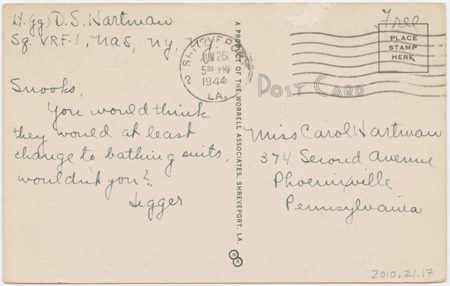 To see a person walk fully clothed into water, becoming heavy and vulnerable in nature, weighed down by corporeality — it’s an almost mythological sight, evoking Ophelia as much as Moses and Jesus. It is an act that immediately makes us think of drowning, just as the emergence of that same person walking slowly, drenched, gasping a little, up through the mud makes us thinks of survival. Of salvation. The river baptism, which needs little more than a body of water and a group of willing participants, is a simple act, but aesthetically, it’s a powerful one. From the spectator’s vantage, watching someone immersed backward — face, clothes, hair, and all, into a river — you can feel the catch in your own lungs, the terrifying bit of water in the nose, the mute roar of the river rushing in your ears. You could almost think you’re falling, too. • 5 April 2011