Given the state of the natural world right now, it’s hard to get through a book of nature writing without getting depressed. It’s not about documenting these trees, this stream, that coastline. It’s these disappearing trees, this dying stream, that polluted coastline. The most optimistic nature writing in the last several years was Alan Weisman’s The World Without Us, which assured humans that once we are wiped out by the plague or manage to kill off one another, the world will restore its balance. The damage is not permanent, as long as we disappear one way or another.

This state of the world is reflected in the title of Jonathan Rosen’s The Life of the Skies: Birding at the End of Nature. Rosen writes, “Birds bring news of this [man-diminished world] like nothing else — they are like carrier pigeons with environmental messages tied to their legs. The messages say: The rain forests are disappearing, the climate is changing, fragmentation is spreading, extinction is rising.” More Americans than ever are claiming bird-watching as a hobby — 47.8 million according to the Fish and Wildlife Service — but the messages the birds carry are getting lost.

Americans are ambivalent about nature. We like looking at the pretty birds in our backyards, but we love suburban sprawl and tidy lawns even more. There is periodic outrage about the destruction of rainforests, but when it comes to protecting our own woodlands, we shrug and make jokes about the spotted owl. Rosen admits this ambivalence is nothing new. His book opens with the story of the ivory bill woodpecker, a bird announced extinct in the 1940s, only to recently reappear. The Lord God Bird has long captivated naturalists, not only for its size but also for its stubborn streak. As its habitat in the south was slowly deforested, it seemed to refuse to adapt or move on. Ornithologists like Alexander Wilson were torn between wanting to protect the bird, and wanting to have one for his own. After one hunting expedition:

Wilson brought his wounded bird to a hotel room where he left it alone for an hour; when he returned, he discovered that the bird had hammered its way through the wall nearly to freedom: “The bed was covered with large pieces of plaster; the lath was exposed for at least fifteen inches square, and a hole, large enough to admit the fist, opened to the weather-boards; so that, in less than another hour, he would certainly have succeeded in making his way through.”

Instead of admiring the bird’s moxie and releasing it back into the wild, Wilson kept the bird. The bird responded by refusing to eat and died of starvation three days later. 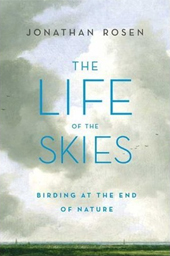 At its best, Rosen’s book is a collection of other writers’ thoughts on nature. We hear from Thoreau, Emerson, Audubon, Teddy Roosevelt, and others. When he’s relating his own feelings about nature, he is too caught up in his own ambivalence to be interesting. While he’s glad DDT is no longer killing off the birds, he’s conflicted about the good it did in its battle against malaria. When talking about the rate of extinction, he writes, “We stand on the bones, and the DNA, of superannuated forebears. Species have always become extinct — we marvel at the dinosaurs, but we do not mourn them. I for one am glad I’ve only got their descendants to contend with on my spring walks.” There is something too cerebral about Rosen’s writing, as if he can’t stop thinking and classifying long enough to write something that transcends physical description.

The problem might be Rosen’s focus on how nature relates to man, instead of the other way around. Rosen situates man somewhere above nature, but not quite removed from it. He described as a “religious idea” the thought of humans as stewards of the Earth that have a responsibility to protect nature. If that were true, America, with such a large fundamentalist population, would be one of the greenest countries in the world, and those going out on Greenpeace boats to harass Japanese whalers would be religious pilgrims. This, of course, is not so.

Amy Irvine explores some of the connections between religious fundamentalism and the destruction of nature in Trespass: Living at the Edge of the Promised Land. Her ancestry includes high-ranking Mormons and some of the earliest settlers of Deseret, but through the years her family’s faith was watered down. Her mother was a “Jack Mormon,” someone who practices the faith half-assed. Her father was not a member of the Church, but instead worshipped nature. He often disappeared into the landscape only to return with pheasants, deer, antelope, elk, and other game. Irvine was her father’s daughter, and she wants to save the landscape that her father loved and her grandmother painted. 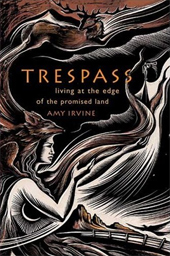 The Mormons of San Juan County, however, violently resist Irvine, her husband Herb, and the rest of the South Utah Wilderness Alliance. They accuse her of putting “snails and slugs before humans.” Irvine looks to the land’s history and the Mormon faith itself to find the roots of this disdain. The Mormons believe that Deseret is the Promised Land, and it was given to them not to take of but to do with whatever they wish. That includes watering their golf courses in the mid-day sun and paving over the desert so that it’s more accessible by recreational vehicles. They also believe in the ever-near Last Days, an idea that has never been helpful for long-range planning.

Irvine is able to deftly combine natural history, anthropology, politics, religion, and personal history, and she is also able to write devastating descriptions of the land:

We wander in and out of deep, voluptuous narrows, sometimes using the opposing forces of our limbs to straddle the space between the walls in places where the canyon floor falls away into a dark, echoing oblivion. Where the walls open up into a stream channel, there are broad banks of thigh-high grasses, a stunning spectrum of gold, green, and blue against the red soil… At one point we stumble beneath a steep overhang where glittering drops of springwater land on a palette of mud marred by nothing more than the feet of mice. The water accumulates to form a thin silver sheen; each new drop that strikes it resonates through the grotto like a perfectly rung bell.

As beautiful as Trespass is, it can be wearying. Irvine is worn down from losing battle after battle, and the fatigue infects the reader as well.

Which is why it’s such a relief to read Roger Deakin’s Wildwood: A Journey Through Trees. Deakin’s book seems to exist in a parallel dimension to the problems of Irvine’s and Rosen’s books. Deakin’s world is one where children are taught biology by being let loose in the forest to document it. He counts moths by lamplight just to revel in their names: green carpet, dark spinach, the uncertain, the willow beauty. He sleeps under a tree with nesting rooks to be able to wake to the sound of their chatter. He spends a page explaining the sensual pleasures of writing with a pencil. “I like a soft pencil better than a hard one. It is gentler on the paper, as a soft voice is easier on the ear.” He writes as if Bill McKibben’s The End of Nature and Al Gore’s The Inconvenient Truth never existed, as if he is of direct lineage of Walden and Sir James Frazer and the great botanists of our time.

Jonathan Rosen was wrong. It’s not a religious obligation that leads to becoming a caretaker of the land. It’s love. With Trespass and Wildwood, that love is obvious. Irvine uses her connection to the desert to wage a legal and political war with the men who cannot see the value in an untouched landscape. Deakin wants others to love the woods as much as he does. Not the manicured, trim lawns and gardens, but the wild, out of control wildlife in various stages of life and decay. “I know of nothing uglier or more saddening than a machine-flailed hedge. It speaks of the disdain of nature and craft that still dominates our agriculture.”

Inspiring others to love nature, however, is harder when using words like “obligation” or “crisis.” When Rosen asked a fellow birdwatcher what the significance of the re-emergence of the ivory-billed woodpecker was, he responded, “It would mean that maybe we didn’t screw things up that badly.” Reading Deakin, it’s possible to regain enough optimism to think that’s true. After Wildwood, I too wanted to sleep in a house where birds and bats are allowed to fly freely through the rafters. That’s much more effective than any lecture on what we’ve lost. • 17 March 2008