I collect thumb toys. Few people know thumb toys by name, but most everybody has seen one. Thumb toys are those small figures that stand atop a little pedestal that fits in the palm of your hand. Push a button under the pedestal and tension is released from strings within the figure; it falls. Let go and the figure rights itself.

I currently own 152 thumb toys. The breadth of the thumb toy world is impressive. The figures in my collection include robots, ghosts, elephants, turtles, dancing ants, circus strongmen, Curious George, a British cop, a bride and groom, a signing frog who swings on a cattail, Frankenstein, and the Fernsehturm television tower in Berlin.

I offer this as background to why I only started to personally click with the 108th Annual American International Toy Fair when I saw a display of thumb toys. I don’t have children and I don’t plan to. I’m neither a toy buyer nor a toy seller. I spent my first hour at Toy Fair, then, walking the aisles as a detached observer of globes and Beanie Babies and a pacifier decorated with bad teeth that is supposed to make a baby look like a redneck. But when I came across a display of dinosaur thumb toys, I felt as if Toy Fair was suddenly speaking as much to me as to the 10,000 toy buyers wandering the show. What made the dinosaur thumb toys especially distinctive is that their figures weren’t dinosaurs, but dinosaur skeletons. A dinosaur skeleton represents the best in thumb toy design — a self-awareness of the thumb toy’s status as a non-toy toy that gives its makers the creative freedom to come up with winking figures.

I couldn’t buy the dinosaur skeleton thumb toys at Toy Fair. You can’t buy any individual toys at Toy Fair. Toy Fair is an annual event for toy retailers, wholsesalers, importers, and buying groups put on by the Toy Industry Association; it is not a toy store. Admission to Toy Fair is restricted to industry professionals and strictly enforced. Attendees must provide documentation of their affiliations. No children under 18 are allowed. None, so don’t even try. As Toy Fair’s website warns, “Please save yourself and your child the stress and embarrassment of being turned away.”

Toys and toy-related meetings, services, and seminars consumed more than 360,000 square feet of New York’s Javits Convention Center for Toy Fair. Toy Fair is not a toy store, that’s true, but it is made to look like one. Actually, it looks like hundreds of tiny toy stores all under one roof. Exhibitors display toys on small tables and shelves and light them to give buyers a sense of how these products might look on their own small tables and shelves back home.

Toy Fair has its own taxonomy. The show’s official program divides products into 126 categories, from Action Figures to Yo-Yos. At Toy Fair, you can find Spring & Summer Toys; Winter Toys; Radio Control Toys; Bath Toys; toys Made in the USA; Balls; Dolls — Collectible; Dolls — Fashion; Dolls — Hard Body; Dolls — Soft Body; Dolls — Talking; Puppets; Magic Sets; Religious Theme Products; and Teen/Tween Products. You can visit special areas of the show floor to find Children’s Books & Music and Earth Friendly toys. You can go to the International Pavilion, which sounds exotic on paper but is really just one row in the farthest corner of the show’s main floor and features exhibitors from China selling completely generic teddy bears and rubber balls from booths with low ceilings and peg board walls.

Toy Fair opened this year, as it does every year, with the Toy of the Year awards. The TOTYs were held uptown at Lincoln Center. There, yo-yo inventor Donald Duncan was inducted into the Toy Industry Hall of Fame. Not to be confused with the National Toy Hall of Fame — which is run by an educational nonprofit in Rochester, New York — the Toy Industry Hall of Fame is a reminder that Toy Fair is not all fun and games. The 30,000 people from 100 countries who came to Toy Fair may be working for and with companies such as Looney Labs and Zabazoo Corp. and Jeezle Pete’s!, but at the end of the day this is work.

The winners of this year’s TOTYs were toy toys; no thumb toys here. Activity Toy of the Year went to Crayola Color Wonder Sound Studio, an interactive pad that plays sounds as a child colors. Hasbro’s NERF Super Soaker Shot Blast took Outdoor Toy of the Year. What’s so great about the Shot Blast? According to Hasbro, “The rapid-fire action just keeps going and going, since this lean, mean, water ‘weapon’ features a large capacity tank for fewer refills and way more soaking!”

Another NERF product — the N-Strike Stampede ECS Blaster — walked away with Boy Toy of the Year. The ECS Blaster is a dart gun with an 18-dart clip and three spares; also, “[t]his high-capacity blaster even includes a blast shield to deflect an incoming ‘fire’ and a pop-out bipod for stability!” 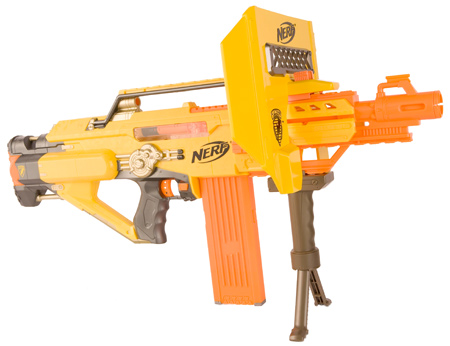 The Squinkles Cupcake Suprise! Bake Shop won Girl Toy of the Year. Squinkles are a set of tiny, thumb sized dolls of babies and puppies and kittens that came out of nowhere last year and ended up being one of the Christmas season’s hottest toys. The Bake Shop is a playset for the Squinkles dolls and doesn’t actually bake. But that doesn’t mean the Bake Shop needs to be the “Bake” Shop, since an oven isn’t a weapon and baking isn’t firing, and the toy industry sees nothing wrong with little girls pretending to run a bake shop with babies and puppies and kittens, fear of litigation trumping any desire to redefine or even eliminate traditional gender roles. 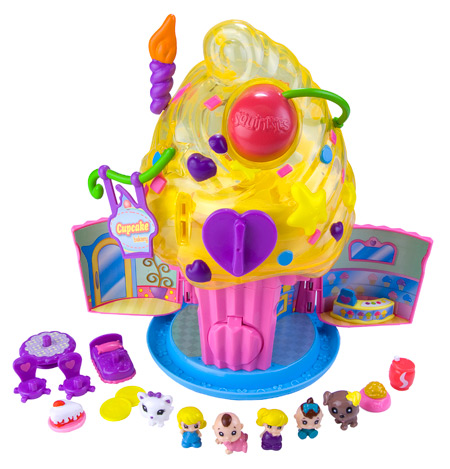 If the idea of plastic weapon- and bake-shop-inspired toys winning awards feels a bit flat, well, the toy industry thrives on consistency and repetition. Last year, the toy industry pulled in more than $21.87 billion, according to market research company NPD Group. Twenty-five percent of that total came from the sale of licensed products; in 2010, the bestselling properties included Cars: The Movie, Disney Princess, Star Wars, Thomas and Friends, and Toy Story. Such products are so important to the industry that the TOTYs include an award for Property of the Year — ”recognizing a property that has had the greatest success spreading its brand throughout the industry.” This year, Disney Consumer Products took the prize for Toy Story 3. 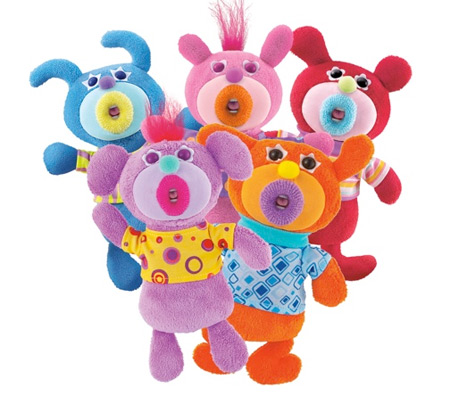 I wasn’t surprised that Mattel and Hasbro and Crayola and Disney led the TOTYs: They dominate the industry, so they are bound to dominate the industry’s awards. These companies, and most toy companies at Toy Fair, function by creating products for children that they hope will appeal to children. But that’s only one way to go about selling toys. Toy Fair had plenty of companies that hope to succeed by creating products for children that appeal to adults.

This is not a particularly new phenomenon. A company such as Playmobil does not create figures and play scenes such as Vacationer, Rose Gardener, and Apple Harvest Compact Set because children have been clamoring to lose themselves in scenarios of beach reading, bush trimming, and apple picking. The retail success of such products requires a parental sensibility — and a particular one, at that — to appreciate Playmobil’s choice to raise such mundane tasks to the level of Treasure Hunter’s Camp with Giant Snake, Robo Gang Battle Yacht, and Red Giant Dragon with LED-Fire. 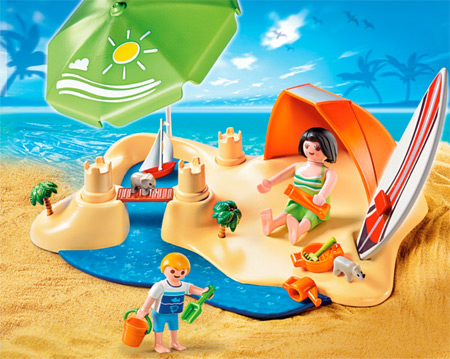 And Schleich. The German company’s display at Toy Fair looked more like a museum than a toy store. Schleich makes small, realistic figurines of animals and mythical creatures and the Smurfs. The company displayed its toys behind glass on walls of backlit shelves. It had domed scenes on pedestals scattered around the exhibit space. Unlike the movable-parts figures of Lego and Playmobil, Schleich figurines are mini sculptures, the animals and humans each captured in one unchangeable pose. Schleich figures feel like they exist less as part of some imaginary world of active play, and more as set pieces for static, diorama-like scenes. The toys have the specificity of other figure sets; but whereas a child wants to collect all the characters from, say, Star Wars, a Schleich collector must want to collect variations. You don’t collect the Schleich cat, in other words; you instead collect Cat, grooming; Cat, sitting; Cat, standing; Male cat, stretching; and Kittens. Whereas a child imposes action on a Lego figure, the Schleich figure comes with its action predetermined, imagination of the user taking a back seat to the creative intent of the creator.

A toy’s need for adult appreciation may not be new. But what did seem surprising at Toy Fair was the number of toys that required an adult’s aesthetic appreciation. Toys such as the New York Puzzle Company’s juggsaw puzzles of classic Gourmet covers seem targeted exclusively at adults, of course. But I noticed many toys meant to be both play things for children and simultaneously objets d’art for their parents.

Many of these toys are admittedly very striking. Haritatoys makes a series of paper toys that children cut, fold, and glue into elegant animals, fruits, vegetables. Kid O’s Deep in the Forest is a small wooden tray with grooves and a reversable backdrop with a summer and winter outdoor scene on either side; the set — “part play theater and part brainteaser,” according to Kid O’s website — comes with 16 thin, wooden cutouts of trees, bushes, and animals such as a bear, raccoon, and fox. Each is painted a single, bold color. Separate cards show scenes that players are supposed to recreate; the aim is to teach depth perception — is the fox behind or in front of the bear? You might think $36 seems like a lot to spend on a depth perception lesson, but when you see Deep in the Forest, you realize you’re getting a mini theater to put on a shelf, too. 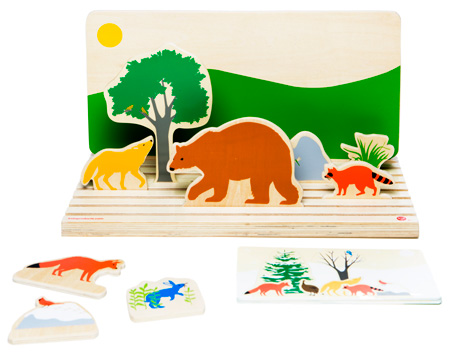 The most dramatic attempt to grab the adult eye came from a company called Brinca Dada. The New York-based toymaker produces modern dollhouses filled with tiny pieces of modern furniture. The $329 Emerson House for children 3 and older is a sprawling two-story residence with soaring windows, solars panels, and smart wood and stone walls.

I like modern architecture, and I like dollhouses in the way that, as many people do, I like most miniature versions of real things. But put the two together and the result feels obnoxious. Is this the point at which an adult’s place in toys has jumped the shark? Consider the company’s description of a house to be released this spring: “Bennett House by Brinca Dada is an oasis in the sea of glitzy toy houses. Heavily influenced by the De Stijl movement of the early 20th century, it emphasizes lines, squares and rectangles in asymmetrical patterns while minimizing color. Fans of Rietveld’s Schröder House will recognize another influence…”

That the full appreciation of a toy would require one to be a fan of Rietveld’s Schröder House seems a pretty high bar indeed. But Brinca Dada seems to ask, Why would we let kids set the bar?

“We are a team of people who believe that toys don’t need to be noisy or flashy to be exciting,” Brinca Dada proclaims on its website. “But toys shouldn’t be marked ‘For Display Only’ either. Toys should be beautiful and fun. That’s why we design toys that parents love to look at and children love to play with. Remember to share.”

Brinca Dada was one of the last booths in the back corner of the Convention Center’s lower floor, and where I ended. It was an interesting bookend to the show. I went into Toy Fair with an eye for dinosaur skeleton thumb toys. I left with an appreciation for the noisy and flashy Nerf N-Strike Stampede ECS, which no parent would love to look at, but which children supposedly love to play with. At least boys. • 4 March 2011