As Harley-Davidson Ken #2, Barbie’s perennial boy toy is presented with a scruffy beard and a stand of old-growth chest hair that would make Tom Selleck proud. His leather and denim duds are accessorized with testeronic man-bling: a heavy-duty Harley belt buckle and a dangling wallet chain. On his left forearm, his tough plastic flesh has been permanently ornamented with a “Born to ride” tattoo. Harley-Davidson Ken Doll #2 is aimed at collectors and the ladies love him. “What I would not have given to have this bad-to-the-bone sexy Ken when I was growing up!!” enthuses one at Amazon. “My Barbie’s [sic] are all falling over themselves trying to get next to this bad boy,” exclaims another.

And yet it turns out that even rugged, undomesticated Ken — Ken at his most virile, redolent of leather and gasoline and lusting for the open road — is not quite as autonomous as he looks. “Although he cannot stand unsupported, he is fully jointed and easy to pose,” Amazon’s official description of the product advises.

Unable to stand alone, readily compliant — such is the fate of Barbie’s perpetual plus-one. Fifty years ago, on March 11, 1961, Mattel introduced to Ken to the world. With his trim crewcut, stiff carriage, and vacant but beseeching eyes, he looked like an earnest All-American zombie ready to do Barbie’s bidding. A half-century later, he’s even more servile, devolving into Sweet Talking Ken, an incarnation Mattel describes as the “ultimate boyfriend for every occasion.” With a built-in voice recorder and microphone, Ken possesses the power of speech — but he can only say “whatever you want him to say.” 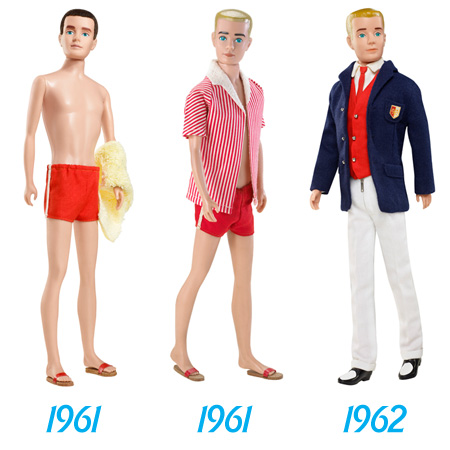 And, thus, as Ken turns 50, it’s pretty easy to dismiss him as a middle-aged appendage with no real identity of his own. Sure, he’s reportedly held 40 different occupations in his life, but what exactly has he done? He’s Barbie’s Tom Arnold, Barbie’s Stedman Graham, Barbie’s Todd Palin.

Which, of course, is actually a way of saying, “Do not dismiss Ken so easily!” While he may have smooth plastic where his procreative organs are supposed to be, Ken has spiritual heirs everywhere.

In a recent essay for the Wall Street Journal, author Kay Hymowitz writes about the “puerile shallowness” of today’s male 20somethings, and of the frustrations today’s female 20somethings experience when dealing with these “guys” — they haven’t yet earned the title of “men” — who refuse to act like the stern, masculine oppressors of mid-century who looked suitably patriarchal in family photos but also midwived feminism in the process. In Hymowitz’ estimation, today’s guys are immature, more interested in PlayStations than baby carriages, slow to commit. Sound like anyone you know?

Throw a stick on any college campus in America and you’ll hit at least three Women’s Studies professors, four fine arts majors, and eight sorority girls who’ve paid homage to Barbie’s influence on their lives via densely footnoted dissertations, photographic recontextualizations, and super-cute sweatpants. Some people view Barbie as a rabid misogynist who’s oppressed millions of potential nuclear physicists into thinking that math is hard. Others consider her a liberating force who taught generations of little, doll-loving girls that there’s more to aspire to in life than doting motherhood. But pretty much everyone agrees that she has made her mark upon American culture.

Ken has been by Barbie’s side, or at least in her general vicinity, for nearly every step of her long journey through the national psyche, and yet what sort of credit does he get as a shaper of contemporary values and desires? Thanks to his love of fashion and his willingness to remain a bachelor all these years, much speculation attends his sexuality. Is he a clueless closet case who doesn’t recognize what he truly wants from a life partner? A more calculating hedonist using Barbie as a beard? A frustrated straight man whose unfortunate lack of a critical accessory leaves him attempting to satisfy his soulmate through endless shopping orgies? 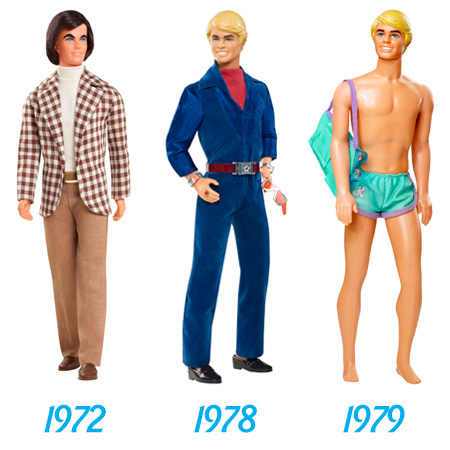 Whatever goes on behind the closed doors of Barbie’s Dream Townhouse, one fact seems readily apparent: Ken has benefited from changing gender roles as much as Barbie has. The mostly overlooked flipside of women’s liberation was men’s liberation. A generation of women released from the obligations of wifedom and motherhood meant a generation of men no longer had to commit to a steady, family-supporting, soul-killing career just because they wanted to get laid. No longer dogged by the shackles of husbandhood and fatherhood, with legions of ambitious women eager to enter the workforce and do the nation’s heavy lifting, men suddenly had more time on their hands — to pursue leisure, to live more expressively, to find themselves.

When we first met Ken in 1961, he was wearing sporty red swim trunks. In Ken’s company, every day was Saturday, every night was date night. Responsibilities, obligations, long-term employment, marriage, parenthood — that was for other folks. Even when Ken was dressed to the nines in fancy evening wear, he had a knack for keeping things casual and non-commital. He was, in short, the world’s first slacker.

And at this point, 50 years into his reign, he just may be the most content. Slackerdom, after all, is the province of the young — or at least that’s how Hollywood depicts it, especially if you’re male. If you’re a fictional real-life Barbie like, say, Carrie Bradshaw, it’s a different story. Throughout six HBO seasons and two movies’ worth of Sex and the City, Carrie’s deferment of traditional adult responsibilities — taking a full-time job, getting married, starting a family — was celebrated as the sexy, glamorous, empowering ideal to which any smart woman might aspire. Forsaking these things — or at least putting them off until she was halfway through her 40s — gave her the time she needed to cultivate deep and meaningful friendships; the disposable income that was necessary to buy beautiful and rewarding shoes, and enough space in her life to pursue her literary ambitions.

But what of the men who pursue similar M.O.’s? Echoing essayists like Hymowitz, Hollywood generally depicts them as cranks, losers, or schlubs. Last year, the lost, beleaguered everydudes who’d failed to take on responsibilities of traditional American men were cropping up so often in movies (Hot Tub Time Machine, Greenberg) and TV shows (Men of a Certain Age) that Slate writer Jessica Grose coined a name for them: Omega Males. “While the alpha male wants to dominate and the beta male just wants to get by, the omega male has either opted out or, if he used to try, given up,” she wrote. 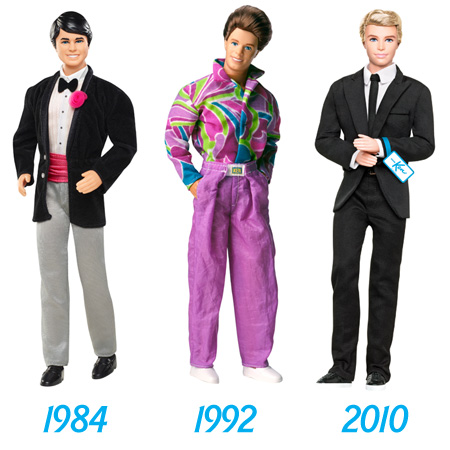 In Ken, we see both the inspiration for today’s allegedly dysfunctional boy-men and also a refutation of the stereotype. He’s certainly no alpha male: If Barbie wants to drive her pink Corvette convertible on every one of their dates, he’s always cool with taking the passenger seat. But Ken’s not a beta male or an omega male, either. Indeed, by the looks of his Twitter feed, he’s as happy and successful as, say, Kim Kardashian — he’s constantly striking deals with fashion designers, name-dropping the DJs who spin records at his parties, and talking up his Hulu.com reality show. 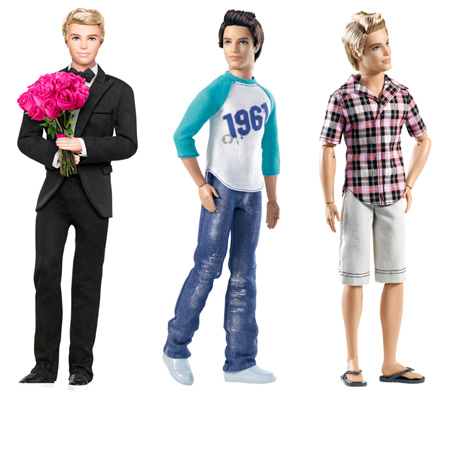 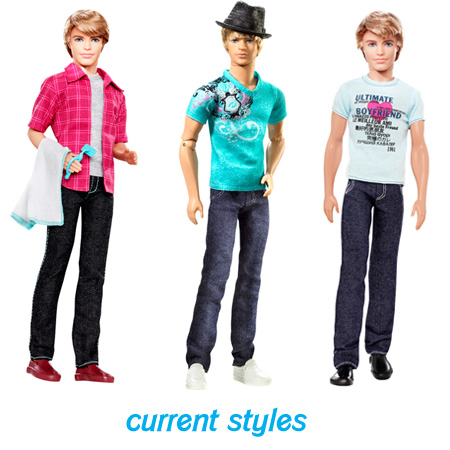 Look around, and you begin to see Ken’s influence everywhere. Pre-Ken, a rugged backwoods he-man who was content to play with snowmobiles while his wife ran Alaska would have been unthinkable. Pre-Ken, there was no such thing as straight guys who loved doing laundry and getting their eyebrows waxed. For 50 years now, Ken has been modeling a new paradigm of American masculinity — one that says it’s OK to love strong women without trying to conquer them, one that says it’s just as permissible for men to reject traditional roles and responsibilties as it is for women. He may not be able to stand on his own two feet without assistance from a four-year-old girl, but he’s still blazed trails no man trod before him. • 25 February 2011