Baldness can be sexy, but let’s be frank, only in certain cases. Bruce Willis, Samuel L. Jackson, Ben Kingsley, or fashion model Tyson Beckford are positive examples. Perceptions may vary, of course, but for the most part a bald head makes a man less attractive, especially if he’s overweight or stocky. And men know it. They experience baldness as a loss of more than just their hair and are aware of it with every look in the mirror.

Before coming to Istanbul I never really thought about the fact that somebody could want to invest time and a couple of thousand euros in new hair. I knew that the “combover” — to cover otherwise obvious baldness — was no longer the latest in hair fashion and a toupee was completely out of the question, but hair transplants never really crossed my mind. Hair loss is not a marginal phenomenon: Two thirds of all men lose some hair as they get older, and one third of these become completely bald.

In the downtown area on the European side of Istanbul, all around Taksim square (just a few steps from Gezi Park where nationwide protests began this summer) it is almost impossible not to see men wearing black bandages after a hair transplant operation. They are a constant. If you look closely, you can see the rosy shine on the treated areas at the front of their scalps, and if you look even closer, you can see the actual stitches from the operation. These men, often still in their late twenties or early thirties, sometimes show up in groups, and sometimes they are followed by their wives and children. The women are often completely veiled, suggesting that they are not from Istanbul (where a veiled woman is a rather rare sight). In fact, most of these “medical tourists” come from wealthy Arab countries. Here, in the foreign Turkish environment, they can transition from being bald to having some hair in relative privacy: Hardly anybody recognizes them as they stroll the luxury shopping centers or enjoy some amazing Turkish food. We don’t know how they are going to explain what happened to their heads when they return home — if anyone even asks them. In any case, they have to wait another half a year or so until the full result can be seen. Reputable clinics offer a warranty. According to some estimates, 100 such operations are performed every day at Istanbul’s clinics and practices, which offer packages covering patients’ travel, operation, and hotel stay. The fierce competition among them help make Istanbul one of the most attractive destinations for all those who need a hair-related change and don’t want to pay the higher prices at home.

Bülent Cihantimur, a handsome, cleanly shaven Turkish man in his early forties, had to go to Dubai to understand the real significance of hair among the elite male populace of the affluent Gulf states: “Full hair and a finely trimmed moustache or beard are a matter of manliness and respect, a real must.” As he explains further, this is related to the concept of “sünnet” (a Turkish word with Arabic roots). Sünnet refers to circumcision, but also implies following the rules and mimicking the behavior of the prophet Mohammed, who is said to have sported a beard and full hair. Mr. Cihantimur is the manager of Estetik International and now knows better what the customers from the country and neighboring Qatar, Kuwait, Abu Dhabi and Saudi Arabia, who make up the majority of his clients in his clinic in Istanbul, expect. Over the years, men from other countries have also been among his patients, but they remain the exception. For example, he relates that one Korean man insisted on having 500 hair roots for implantation on his forehead taken from his face rather than from the back of his head. Interestingly, hardly any Turkish men undergo this kind of procedure, suggesting that hair may have a different significance in Turkish vis-à-vis Arabic culture. I met Mr. Cihantimur and his colleagues in his office on the Asian side of the city, in a booming business district with various mid-sized glass-clad buildings — one of those neighborhoods that could be almost anywhere in the developed world. He briefly introduced me to two employees from Syria (who speak Arabic, a language otherwise little spoken in Turkey) and man a hotline for recruiting customers and assisting with questions. Many Arab businessmen come because of word-of-mouth. When I ask the doctor about his own receding hairline, he surprises me by answering that his appointment for a hair transplant is just ten days away. I don’t ask him, though, if he is taking this step to feel more comfortable or to be able to sell his product even better, or both.

For the full procedure, patients have to stay in Istanbul for three or four days, which they usually combine with some sightseeing. I can’t stand the sight of blood, so please forgive me for not basing my report on this procedure on my personal observations in the operating room. The surgeon removes a narrow strip from the fringe of hair at the back of the man’s head. The hair from this part of a man’s head is genetically programmed for a longer growing life. This strip of hair is separated and divided into several groups of tiny hair follicles, called follicular units. In the next step, they are planted in the areas affected by the hair loss, where they continue to grow. Setting these grafts — they usually number about 2,000 — is done with the help of a tiny robot. Local anesthesia ensures the patient doesn’t feel any pain. In any case, all this requires good planning and a sense for what is realistic for a man at a certain age. “We need some hair to start with; unfortunately I cannot help somebody who is completely bald,” says Cihantimur. There are some possible pitfalls — a hair transplant on a mature man may have an artificial look. Remember Silvio Berlusconi?

While hair transplants involving the scalp have been around for decades, the insertion of hair follicles to shape a beard where before there was no or too little hair is a relatively recent phenomenon. Even five years ago, beard transplants were not popular at Istanbul’s clinics, and in retrospect it’s not really clear if the offer created the demand for it or the other way around. In any case, it doesn’t seem to be purely a matter of chance that Turkey is a hotbed of surgically aided beard perfection: there is a reason for it, or even several.

In a way, a beard gives a man a new face. It makes him look older and, if properly taken care of, lends him an air of maturity. In addition, there is a Turkish saying that “a man without a mustache is like a house without a balcony.” On the other hand, someone who has little facial hair but tries to highlight it can easily appear ridiculous: A pencil thin beard does not a jaw-line make. It is quite fascinating to observe the diligence of the many barber shops of Istanbul, a few of which operate almost around the clock.

Turkish men are known to have sported beards for a long time. And there is hardly a country in the world that has so many rules regarding approved grooming styles, or the resulting awareness of this aspect of the face. Fashion and ideology are inextricably enmeshed. You will hardly find a bank employee or a teacher with a full beard. According to Hüsamettin Arslan, a professor of sociology at the university of Bursa, the strict rules regarding beards can be traced back to the middle of the 19th century, when the Ottoman Empire undertook many efforts to modernize the country.

Many conservative Turks favor the “badem” (almond) style mustache, which is rather small and neatly trimmed. Prime minister Tayyip Recep Erdoğan, who belongs to the conservative Justice and Development Party (in Turkish: AKP), is the most prominent example. In the mustache typically worn by nationalists, in turn, the two ends extend downwards, as in a horseshoe. And a rather bushy mustache is very popular among Turkish-Kurdish men. Many urban, Western-oriented men from cities like Istanbul or Izmir prefer to be clean-shaven.

The recent decision to lift the ban on headscarves in public office caused somewhat of a controversy because the issue is the fault line for a long-standing rivalry in Turkish society between religious conservatives and their secular opponents. But few noticed that it was accompanied by new rules about men’s facial hair, with the result that beards for certain professionals in public office are no longer off limits. However, the ban remains active for judges, prosecutors, police and military personnel. “These restrictions violate the right to work, the freedom of thought and belief,” said Erdoğan about the restrictions. Beards are seen as signs of Muslim piety, and this small move is in accordance with current political developments: towards Islam and away from Kemalist principles or ideology. Kemal Atatürk, the founder of the Turkish Republic, banned scarves and beards for people in public office. However, a certain degree of confusion remains about beards in Turkey today, and in many cases it’s the combination of beard, hair, clothing and attitude that allows for a clearer idea of the political inclinations of a particular man in the street. Someone may have a “walrus” mustache and, contrary to expectation, a conservative political attitude. And a leftist may wear the“badem” mustache usually associated with conservatism. Members of the conservative Gülen movement (named for Fetullah Gülen, who has been living in the United States since 1999 but, as can be seen during the current political turmoil, still exercises a lot of political influence in Turkey) usually shave, especially the younger ones. On the other hand, a long, full beard can be the sign of a particularly strong religious affiliation. Also, during the haji, the Muslim pilgrimage to the holy city of Mecca, men let their beards grow.

This free flow of signs represents an important difference from the Gulf states, because the Arabs streaming to the Turkish clinics want either a mustache, a neatly trimmed goatee, or a finely contoured full beard — nothing else will do. In Arab business circles, a beard amounts to a must. 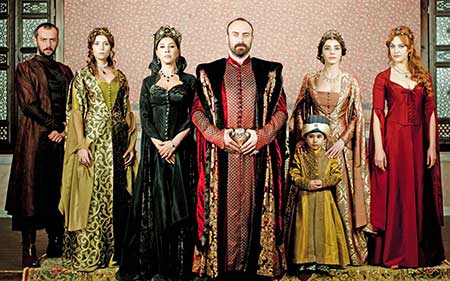 Turkish mustaches have been a cliché for decades, if not centuries, but the more recent popularity of beards throughout the Near East may also be related to the populartiy of Turkish TV series in the Arabic-speaking world. They feature actors such as Kıvanç Tatlıtuğ, sometimes called “the Brad Pitt of the East,” or the dark-haired Kenan İmirzalıoğlu – both of whom are mostly seen with beards these days, in one shape or another. And the fact that the life of the Sultans, material for endless fantasies and projections, has been resurrected in these neo-Ottoman times could contribute to this trend. Muhteşem Yüzyıl (the magnificent century), an opulent TV series about the 16th century’s Süleyman the Magnificent, has enjoyed enormous success. It has been sold to more than 40 countries in the area of the former Ottoman Empire and even beyond. It goes without saying that all the male characters in this series sport full beards. • 2 January 2014