As every cinephile knows, we go to the movies for all kinds of reasons, but escapism is probably the most common. We gather in darkened rooms to see an enhanced version of life where the people onscreen are better-looking, wittier, braver, more dynamic, and generally livelier than we are in real life. Movies give us a sense of what our lives might be like if only we were different people. Love stories epitomize this idealization as no other genre does because while some people might fantasize about being a soldier, a detective, or an uncatchable criminal mastermind, I think the Blues Brothers had it right: at one time or another, everybody needs somebody to love.

This is where the typical love story tropes tend to build up our expectations only to end up letting us down. No matter how much we might wish otherwise, let’s be real — not everybody finds somebody in the end. Maybe this is why stories about love lost are a lot more relatable than those about love found. However many times you’ve seen Casablanca, you still hope against hope that this time Rick won’t let Ilsa get on that plane and fly off into the rain with her husband, Nazi resistance be damned. It might not have worked out for those two in the end, but at least they were together for a little while and besides, they’ll always have Paris.

I’ve always been most deeply affected by the kind of love stories that are mostly unfulfilled. The kind where the couple in question doesn’t ever actually get together, never has their time in Paris, and the romantic tension between them keeps flickering until the credits start to roll. I’m talking about films like Lost in Translation, In the Mood for Love, The Age of Innocence, and My Night at Maud’s, but my wilted bouquet goes to 1945’s Brief Encounter, David Lean’s subtly moving tale of a very British love affair, as the most realistic and therefore greatest unfulfilled love story of them all.

Lean, who helmed epic productions like Lawrence of Arabia and Doctor Zhivago, once remarked that Brief Encounter was “the riskiest thing I ever did.” It’s easy to see why. Simplicity can be more challenging than an epic, especially in film, because there’s less room to hide. The plot is incredibly simple — just before the onset of WWII, two married English people meet by chance at a remote railway station, when Alec (played with quiet confidence by Trevor Howard) removes a speck of railroad grit from the eye of Laura (a luminous Celia Johnson). They get to talking, break the ice, and have a perfectly pleasant getting-to-know-you type of conversation over tea and biscuits. She is a slightly bored, dreamy housewife, and he is an idealistic doctor. Somewhere in between casually explaining their lives to each other, they start to feel the slight tug of falling in love turning into a full-on pull. But, of course, they are both married, and infidelity just won’t do. 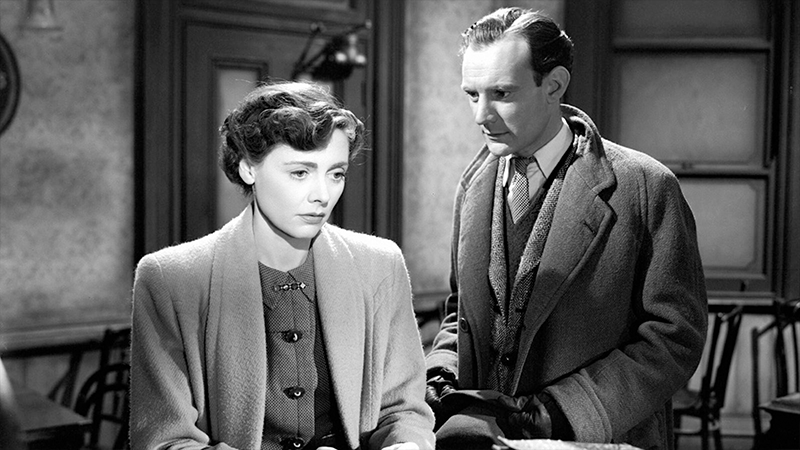 One of the loveliest things about Brief Encounter is how it makes cinematic poetry out of the most mundane details of life. Almost all of the drama between the two happens as a minuet of small gestures, poignant gazes, pats on the shoulder, allusions to poetry, and classical music. Celia Johnson’s large oval face could have come straight from the silent era. She doesn’t have to speak to tell us what Laura’s thinking — she can carry the moment with just her subtle expressiveness, shades of emotion flitting across her plaintive eyes and small mouth. Neither Johnson or Howard were big name actors at the time, which added to their sense of being ordinary people.

Just as in real life, every small moment of Alec and Laura’s budding love affair is imbued with secret meaning, and the affection mixed with hesitance that the characters feel towards one another perfectly captures the awkward fumbling that goes into figuring out the ropes of a new relationship. Alec and Laura are not overly dramatic people, but they still have profound feelings even if they don’t feel comfortable immediately acting on them. This is a love story for the kind of people who are usually too shy for romance and too skeptical to suspend disbelief.

The usual tropes of love stories are about overwhelming desire and forbidden passions causing people to knock over tables and chairs and various operatic demonstrations of love, lust, or something wildly oscillating in between. Brief Encounter is far too sophisticated for that, too modern. Chekhov once said that his goal as a dramatist was to portray how when people sit down to dinner, they’re just sitting down to dinner, but at the same time their happiness is being created or their lives are being ruined. This exquisite sensitivity to the powerful emotions trembling under the placid surface of everyday life imbues every frame, and it’s one of the film’s strengths that a story this ostensibly undramatic isn’t boring or trite.

There’s plenty of conversation, and some witty banter, but the most profound statements the characters make largely happen in voiceover, if they are verbally articulated at all. It’s the rare movie where interior monologue is what speaks the loudest. We see essentially what kind people Laura and Alec are, how genuinely interested in each other they are, and one of the things that always gets to me is Laura’s quiet anguish about her new emotional experience. It’s not that she feels guilty in a religious sense, and I don’t totally buy the middle-class propriety argument for why Alex and Laura are too reserved to act on their feelings. It’s something different. 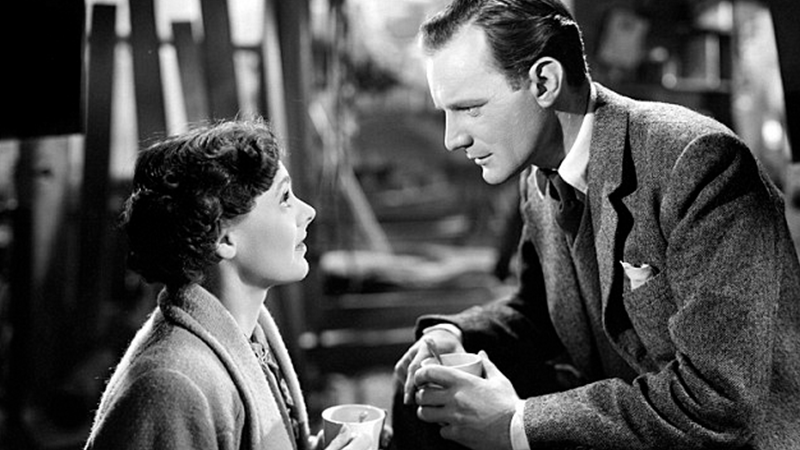 Instead of the usual soap opera clichés, Brief Encounter chooses to portray an awkward realism, and is all the more relatable because of it. Laura is far too real, too much like us for all that silliness; she’s the kind of person who worries, genuinely cares about hurting her pleasant but fusty husband’s feelings, and her anxious overthinking about her new bliss is what makes her so adorably human. When an annoying acquaintance invites herself to sit down next to Laura on the train and commences to prattle on about nothing, spoiling Laura’s moment of quiet reflection, she wishes the old bag ill only to immediately reproach herself for being rude even when she hasn’t actually said anything at all.

At first, Alec and Laura don’t meet privately, since they can’t afford to have the prying eyes of a small town find them out. Most of the drama happens in neutral spaces like the train station’s refreshment room or in a borrowed apartment belonging to Alec’s friend that the couple can’t even stay in very long because of that friend’s prissy judgment. The world’s blithe indifference keeps interrupting the couple’s stolen moments, another perfectly true to life detail. Their sole outing in the park happens on a windy, overcast day and they are too busy looking over their shoulders to do much of anything. There’s nothing like forbidden love to make you paranoid in public, especially back in the days when being caught breaking the social contract carried real consequences.

From the curtness of the title on, Brief Encounter is quintessentially British. The England of the film isn’t the rowdy Albion of Shakespeare and the Romantic poets, but the stiff-upper-lip world of duty and decency amid the perpetual rain. The story of Alec and Laura’s awkward affair fits in perfectly among English culture’s pantheon of quiet desperation, from The Kinks’s “Waterloo Sunset” and the songs of Nick Drake to T.S. Eliot’s forlorn J Alfred Prufrock and the poetry of Philip Larkin. The film was a hit after its release in 1945 in a country that had just been repeatedly pulverized by Nazi bombings and had managed to survive by keeping calm and carrying on. You’d expect that the average British moviegoer (as Laura herself is) already temperamentally skeptical of garish emotions, would be totally turned off by a story about emotional overindulgence. 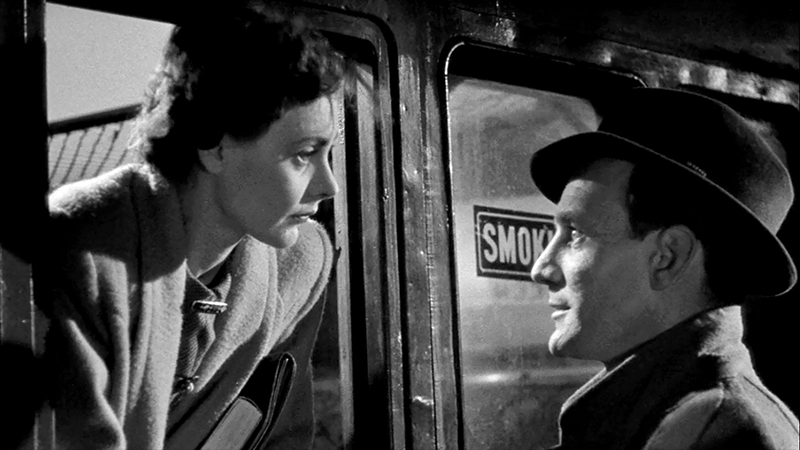 And this is what makes Brief Encounter still relevant 70 plus years later. So much of our lives now are mediated (some would say dominated) by screens of all kinds, which makes more and more of our emotional lives occur internally. Everywhere you go, people aren’t looking or talking at each other, their attention has zeroed in on the little glowing screens in their laps. I’m convinced that all this immersion in the endless narratives of cyberspace makes us weary of the validity of those narratives and hyper sensitive to the real world around us. Chance encounters carry more weight — and are more emotionally complex — when they suddenly pluck us out of our virtual worlds and into the real one.

I think we’re more apprehensive about grand gestures at this point in history because we’ve already been exposed to so many of them — everything’s always over the top, getting bigger and louder, constantly vying for our attention. What makes more intuitive sense nowadays are the stories that don’t wrap up into a nice narrative box, where things don’t necessarily come together. We’ve heard those stories before. The kind of nervous self-analysis that Laura has about her motivations comes second nature in a culture made up of people who are constantly living in their own head. We’re more awkward now that everything’s perpetually on display.

By the end of the film, the two sort-of lovers inexorably go their separate ways. They are cheated of their last moments by another jabbering idiot, but this only makes their final goodbye almost unbearably heart-rending. Nothing quite worked out even though it could have. But neither of them regrets a thing, even though the world around them had no room to accommodate their intimate mood. We have good reason to think that even though they will probably never see each other again, their lives will now be ever-so-slightly changed for the better. Laura will always remember her time with Alec whenever she hears Rachmaninoff’s haunting second piano concerto, and then she’ll resume her perfectly ordinary life knowing a little more about herself. It’s a lovely reminder that, much like kisses and tears, sometimes love itself can be a brief encounter. •

Feature image by Isabella Akhtarshenas. All other images are stills from Brief Encounter.