Orhan Pamuk is one of the world’s best-known novelists. The Nobel Prize-winning author’s fictions often focus on the lives, times, and people of his native Istanbul. His latest novel, A Strangeness in My Mind, was six years in the writing and tells of the life of one street vendor in the city. TSS editor Richard Abowitz reached Pamuk by phone in New York where he teaches at Columbia University.

TSS: The title of your new novel, A Strangeness in My Mind, comes, of course, from a Wordsworth poem — a massive work, The Prelude — but I’m struck by the way you use it, because, you know, we think of Wordsworth as a poet that loved nature, and, while he was pre-industrial revolution, he wasn’t exactly a fan of what he saw coming. You use it, in your new book: “In a city, you can be alone in a crowd, and in fact what makes the city a city is that it lets you hide the strangeness in your mind inside its teeming multitudes.” How did you think of applying Wordsworth to a city and as the title for your book?

OP: The great thing about poetry, and in fact literature, is that we don’t only read it in the context that it’s written. Wordsworth and his friends invented what we today in an exaggerated way call “romantic poetry.” If with that we mean that imagination — capacity to see strange things that mean more than the physical — goes beyond what’s given to us, beyond the reality of the present, I agree with Wordsworth. Actually, my character, Mevlut Karataş, is not a rich kid, but a street vendor who sells boza, a fermented Ottoman beverage, in the streets of Istanbul between 1970 and today, but his imagination is alert. I gave six years to render the humanity of a lower-class character who has a great imagination. Though my character, by class and by culture, is unlike me, he has some parts of my imagination and my mind. In my childhood, even in my early 20s, my friends used to tell me, “Orhan, you have a strange mind.” And then, years later, when I was reading Wordsworth, I came across this line, and I said to myself, “One day, I am going to write a novel and make the title A Strangeness in My Mind.” Then, many, many years later, I wrote Mevlut Karataş, this lower-class character, who I did my best to identify with, to deserve this title, so to speak. It both alludes to the character’s imagination and also to the city that he is walking around and working, working, walking, walking, all the time.

TSS: I think of Dickens or I think of Horatio Alger Jr., where you meet a poor street vendor and you expect him to rise up in the world — the bildungsroman, the coming-of-age novel. Your street vendor doesn’t quite have that; it’s not the story of his economic rise in the way that maybe a reader might be trained to expect. 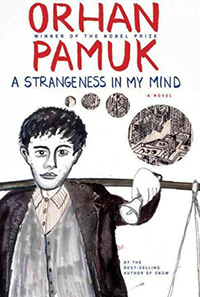 A Strangeness in My Mind by Orhan Pamuk.

OP: A Strangeness in My Mind, yes, has intentionally Dickensian characters, but it’s not melodramatic. I love Dickens. I love his language and humor, but then, I don’t like his melodrama, and I am also sometimes upset by the way he makes his characters funny by making them alliterative and one-sided.

The novel is Dickensian or like a picaresque novel in that it chronicles the years: various adventures, Mevlut doing his military, Mevlut going to his high school, Mevlut selling yogurt, or Mevlut selling rice and chicken in the streets. On the other hand, this is not a story of Mevlut learning something from some experience and this is the end of his growing up. This is not a bildungsroman novel in that sense. This is an epic novel, where the protagonist is busy taking us to various corners of Istanbul. In a way, his personal adventure shows us the way this city developed. Modernity came and changed all the daily habits of people living in Istanbul. The intention here is to see the totality, the complete change in the city. Not the big political change, but the change in little details of life: eating habits, working habits, the way we talk, the way we walk in the streets, the way we look at shops — small things that constitute the major part of our times in a city which, in my lifetime, grew from one million to 15 million.

Mevlut doesn’t have strong political ideas, because he is close to ultra right-wing cousins, close to his friend Ferhat who is a leftist and Shia allegiant, and he goes with this modern, dervish, Sufi sect and its sheik. In all these cases, he always gets some advice, some economical help, and some wisdom, while he does not argue or get ideologically engaged. Mevlut doesn’t have strong political opinions because he wants to survive in a city which has strong divisive lines, but, on the other hand, the fact that he doesn’t have strong opinions and political and moral engagements makes it easy to navigate between these circles and other points of interest in Istanbul.

TSS: It’s incredible to see how a street vendor’s entire life in Istanbul intersects with history and politics, even, as you say, as someone who’s not particularly political. Even going to school, his hair is cut because of martial law.

OP: Thank you for saying so, but Mevlut’s activity, in the end, doesn’t change history. He is, in that sense, an everyman, and in this novel I wanted to write an everyman story. You know, I teach Art of the Novel at Columbia University, and the first thing we notice is if you look at the history of the novel, that all the stories, even the most political ones, are told through the eyes of middle-class, upper-middle-class, or even aristocratic characters. From Steinbeck to Garcia Marquez, from Zola to more realist writers, the lower classes are portrayed in the novels, but always they are perceived through the eyes of a central middle class or upper-middle-class or even aristocratic class, such as in Tolstoy’s Anna Karenina.

My challenge in writing this novel was to render Mevlut’s humanity fully, and that’s why I gave six years to this novel — to render him like a Dostoyevsky hero or a Tolstoy hero or a Proust-like character, who is fully-developed, who is interesting on his own terms, and who engaged with his society, but who is not important in the sense that he makes history. He is not a “hero” in the traditional sense of the word because the word “hero” comes in the end from classical ethics where it’s all about the great warriors or the great ladies or legendary historical figures.

Mevlut is an everyman, but his imagination — the “strangeness in his mind” — every detail of his life is, I underline, interesting. I wrote this novel to suggest that every man can be rendered interestingly enough. It’s the middle-class, intellectual mistake to make a superficial or melodramatic tearjerker. Here is a guy who is just normal, just like you and me, and also extremely poor. Leave him, you will find him interesting, I am perhaps whispering to myself.

TSS: As you say, you spent six years on this. I don’t think I’ve ever read a novel that’s exactly this. You have these third person sections interrupted by different voices — not the same voices, sometimes voices you wouldn’t expect — appearing in first person, talking at the time. How did you come up with that idea?

OP: As you know, this novel involves a lower-class character in Istanbul, and I am a middle-class, upper-middle class person. I have seen Istanbul’s shanty neighborhoods. They are better than, say Brazilian favelas or slums of Bombay, but in the end they are shanties, and I have seen them in my childhood from afar. That is, I am not in that culture. By culture and by economical class, I am not close to Mevlut, which is why I did a lot of conversations, interviews, friendships with street vendors to be able to write this novel.

For example, in my childhood in the 50s and 60s in Istanbul, yogurt was not a bottled product. Later, it was bottled. So was boza, and once that happened, you began to lose your jobs, so I wanted to write this story. But once I began to talk with street vendors, then I began to learn about how they built their houses with their own hands on illegal government grounds in the 50s and 60s, how Istanbul developed, how its population rose up, how these people came from their rural poor villages, what was their relationship with the locals, how the local mafia or local organizations carrying guns helped, so forth and so on.

I began to talk to so many people, even retired policemen, tricksters, gangsters. I had so much one-to-one information, and I felt that just writing this novel like John Steinbeck or Émile Zola is not enough. Although I am getting old, a young postmodernist in me was uprising. He was saying, Orhan, please also represent these voices that you recorded, you talked to, you liked. So I decided to experiment a bit, which may be a bad habit. I didn’t insert the first-person singular voices of these people, of course; I changed them, invented them, turned them around.

Something I played around and developed in my other novel, My Name is Red, is where everyone tells his or her version of the story, and sometimes these first-person singulars, which contradict each other, make them unreliable. I like when the New Yorker’s critic James Wood said that sometimes unreliable narrators are reliably unreliable. So these contradicting voices also lent an atmosphere to the novel by inventing a space in the pages of the book where some of the characters sometimes are arguing with other voices. There is this kind of artificiality in the making of the novel which I like. Perhaps I’m happy that the post-modernist in me is not dead. But it worked with this novel, and it’s not confusing. You understand who is speaking, when, and why this person is unfolding the narration.

TSS: I read that you created a museum in your last book. It makes me wonder if this playing between the line of nonfiction/fiction — and you say that some of these voices came from people you spoke to — is part of your joy.

OP: This lens — the art of the novel — is strange. You always think: is this detail based on the writer’s reality — that is, real life? Or is it invented? This is how we question which is fiction, which is not fiction, which is invented, which is reality. Although it says at the beginning, “This is a novel,” we are thinking that we’re going to know about this writer’s reality — experience or imagined: it doesn’t matter. We read novels to have an access to reality of something. There is an unending test, there is an unending playfulness as we read and write novels about what comes from writer’s imagination and what comes from life. And in fact, this question makes novels all the more powerful because our imagination makes reality more perfect, more understandable, and we need it to understand reality. But where we put our imaginary details to the story, that is always the question and that is always a challenge and a power for the novelist. •