Natan Sharansky is obsessed with death. I don’t mean that he wants to die. But he wants to be OK with death. He’s ready to die for the cause. He first decided that he was ready to die back in the Gulag, where he spent nine long years imprisoned as a Soviet dissident, one of the Jewish Refuseniks who challenged Soviet immigration policy. Later, when he finally made it to Israel, he was willing to die for a Jewish state. In general, over the last few decades, he has been a vocal proponent of the “death before tyranny” approach to international relations. This, famously, has endeared him to George W. Bush and many of those in the Bush Administration. Sharansky’s book, The Case for Democracy: The Power of Freedom to Overcome Tyranny and Terror, was singled out by President Bush as representing, “how I feel.” 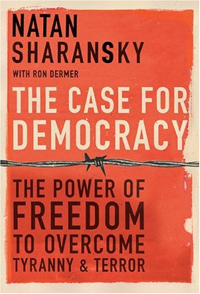 The most brilliant and incisive thinker on the Conservative side of this matter is still the early-20th-century German political philosopher and legal theorist Carl Schmitt. He’s the evil genius nipping at Liberalism’s Achilles’ Heel. Politics, he argued, is only about one thing: the friend/enemy distinction. Politics is the means by which a social unit defends itself from other inherently hostile social units, internal or external. Because people are what they are, he reasoned, that friend/enemy distinction will never go away, and a politics that forgets about the distinction will betray the society of which it is a part. Liberalism, in contrast, sees politics as overlapping with economics, culture, and civil institutions. Liberalism muddies the water. It sees a chaos of competing claims and wants to make a place for all of them to muck about in the public space. And it is this acceptance of chaos that will be its doom, thundered Schmitt, as the door is left open for any enemy to enter into that public space and claim it by force.

This is what bothers Sharansky about Liberalism too, especially in its cosmopolitan, internationalist variant. Liberals don’t know how to fight for freedom. Where they should see enemies, they see an endless line of possible partners in debate and negotiation. Sharansky’s newest book, Defending Identity: Its Indispensible Role in Protecting Democracy, is thus devoted to stiffening the collective resolve. He notes that, “Author Oscar Van den Boogaard, asked why Europe did not resist the attacks by fundamentalists, said in self-mockery: ‘I am not a warrior, but who is? I have never learned to fight for my freedom, I was only good at enjoying it.'” The rootlessness, the wispy annoying blasé of many Liberals, personified by figures like Van den Boogaard, robs democratic society of its self-assurance.

Robert Kagan makes roughly the same point in his new book, The Return of History. Kagan thinks the essential conflict has returned, the friend/enemy antagonisms that have characterized human history from the beginning. We’ve lived in a strange bubble since the collapse of the Soviet Union, he argues, in which we have pretended that the fundamental problems of politics just went away as the Soviet Bloc dissolved before our eyes. But with the rising power of Russia, China, India, and Iran, the old power politics is back. 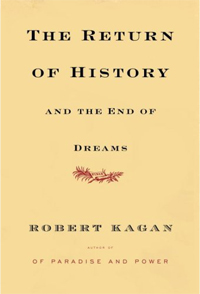 Kagan and Sharansky are really talking about the dark places in the human soul. They are making the point that there is an inherent flaw in the human constitution that makes evil a reality. Sharansky is comfortable with this being a theological claim, while Kagan makes his point more in terms of human history. He notes, “The ancient Greeks believed that embedded in human nature was something called thumos, a spiritedness and ferocity in defense of clan, tribe, city, or state.” It seems like a throwaway line but really it is the very core of his argument. Both Kagan and Sharansky see the drive for conflict in the human soul as functionally irreducible and therefore The Central Fact which politics must address.  Sharansky says, “Unless you recognize evil, you cannot begin to fight it. But this is where the champions of post-identity have done the greatest damage. When a coalition can be forged between well-intentioned liberals and the most anti-democratic forces on the planet, moral confusion rules the day.”

We are talking here about the wimpiness, the impotent and self-satisfied nature of Liberalism. Critics like Sharansky and Kagan, just as Schmitt before them, are correct in the essentials. The wimpiness is not incidental. It can’t really be cured. Indeed, the wimpiness is as close to a fundamental metaphysical axiom as you’re going to get from a strain of thought that is inherently suspicious of fundaments, metaphysics, and axioms. Liberalss are willing, if push really comes to shove, to risk their lives in pursuit of Just Cause X. But they aren’t exactly eager to go about doing that. And that’s because they tend to see meaning not as rich, rooted, transcendent or transcendental, but as manufactured, malleable, exchangeable and, in the last instance, arbitrary. Liberals have no idea how to characterize human nature in its essence. So, they’re always looking for a little more time, a little more room in which to sort things out, at least temporarily. Indeed, if Kagan can refer to the ancient Greeks in bringing up the concept of thumos, Liberals can refer to the funeral oration of Pericles, where he says:

If then we prefer to meet danger with a light heart but without laborious training, and with a courage which is gained by habit and not enforced by law, are we not greatly the better for it? Since we do not anticipate the pain, although, when the hour comes, we can be as brave as those who never allow themselves to rest; thus our city is equally admirable in peace and in war. For we are lovers of the beautiful in our tastes and our strength lies, in our opinion, not in deliberation and discussion, but that knowledge which is gained by discussion preparatory to action. For we have a peculiar power of thinking before we act, and of acting, too, whereas other men are courageous from ignorance but hesitate upon reflection.

Still, I suspect that all Liberals harbor, at times, a touch of buyer’s remorse about the flimsiness and the “weakness” of their position. Since Liberals are always ready, almost despite themselves, to betray some belief or other they thought they held, sometimes the certitude of the true believers looks comforting. But Liberals only get themselves into hot water whenever they try to borrow a little of that certitude. The better route, the only way to be vaguely consistent as a Liberal, is to be reliably inconsistent.

Liberals simply don’t have many resources when it comes to convincing themselves about what it is necessary to die for. They want to live. They want to live because they are reasonably sure that it’s all there is. Life in its simple, sometimes brutal facticity is the sum total. We all create meaning for ourselves along the way, properly so. But Liberals are painfully aware that it’s all, at the same time, a game. The universe cares not a whit. There’s a central passage in Sharansky’s book:

Democracies, which place great value on human life, are very vulnerable to fear. This vulnerability becomes acute for a democratic society that has a weakened sense of identity. Like prisoners with a weak identity who are concerned only with their personal safety, leaders pay any price to avoid bloodshed; everything will be sacrificed in the name of the peace.

The combination of guilt and fear inevitably leads toward appeasement… How much more debilitating is that paralysis today when after decades of post-ideology theories permeating the culture, the West lacks firm belief in its own values and identity?

It’s the Schmittian point again, and it is true. I don’t think there is any point in denying it. Liberals lack firm belief in their values. They have a tendency to pay any price to avoid bloodshed, to sacrifice everything in the name of peace. There are times when this attitude is disastrous and self-defeating. The full title of Kagan’s book is The Return of History and the End of Dreams. He means to say that the hard reality of a dangerous world demands a reciprocal hardening in our selves, especially when it comes to politics, the hard man’s sport. That’s why Kagan goes to a great deal of trouble to prove that political projects — like the European Union — that make root assumptions about the near-infinite capacities of compromise are going to lose out to power politics in the long run.

Still, Liberals aren’t having it. They have a weak dedication to softness in the name of a loosely held belief that life ought to be preserved, even if it takes a dizzying array of compromises. They are more likely to be appeasers, more likely to try to ensnare the tyrant in a web of institutions and treaties and agreements than to take the hard line. They are inclined to be excited about the possibilities opened up by the European Union and unwilling to accept the idea that human politics will only ever be properly described by Homer’s Iliad and its battles of thumos. Just because human beings are so unfathomable and so consistently disappointing doesn’t mean we ought to stop trying altogether. • 5 June 2008